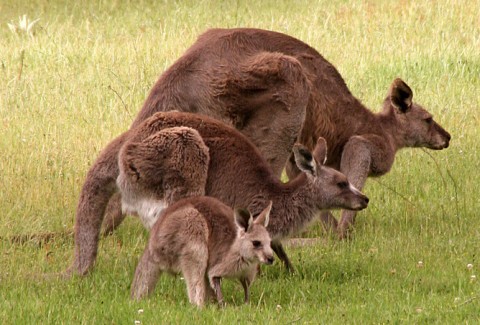 Kangaroos exist only in Australia. Suggested reading: Charles Darwin: An Epiphany for the Muslims, A Catastrophe for the Christians

The Bible and the Quran describe the list of animals that the Prophet Noah, may peace be on him, carried with him in his ark.  The list is fairly different!

According to the Wikipedia account, Noah’s Ark (Arabic: سفينة نوح‎; Hebrew: תיבת נח‎; Biblical Hebrew: Tevat Noaḥ) is the vessel in the Genesis flood narrative (Genesis chapters 6–9) by which the Patriarch Noah saves himself, his family, and a remnant of all the world’s animals when God decides to destroy the world because of humanity’s evil deeds.[1]

Interestingly enough the Bible describes the dimensions of the ark or the boat and it can certainly carry, what the Quran proposes but is insufficient for carrying all the animals, as described in the Bible and shown in many a Hollywood movies about the flood.

Now if all the animals were on board, then all types of elephants, rhinoceroses, giraffes, camels, woolly mammoths, dinosaurs and all the large extinct birds, weighing from one ton to several tons each, should have been on board, as according to the Christian Creationists, dinosaurs existed along side humans.

The sixth chapter of Genesis, does not leave any stone unturned to tell us that the flood was of global scale and Noah was to take each and every earthly animal with him, along with food chain of each of the species.  Read your Bible, unless you have recently read the book of Genesis:

Now the earth was corrupt in God’s sight and was full of violence. God saw how corrupt the earth had become, for all the people on earth had corrupted their ways. So God said to Noah, “I am going to put an end to all people, for the earth is filled with violence because of them. I am surely going to destroy both them and the earth. So make yourself an ark of cypress wood; make rooms in it and coat it with pitch inside and out. This is how you are to build it: The ark is to be three hundred cubits long, fifty cubits wide and thirty cubits high. Make a roof for it, leaving below the roof an opening one cubit high all around. Put a door in the side of the ark and make lower, middle and upper decks. I am going to bring flood waters on the earth to destroy all life under the heavens, every creature that has the breath of life in it. Everything on earth will perish. But I will establish my covenant with you, and you will enter the ark—you and your sons and your wife and your sons’ wives with you. You are to bring into the ark two of all living creatures, male and female, to keep them alive with you.  Two of every kind of bird, of every kind of animal and of every kind of creature that moves along the ground will come to you to be kept alive.  You are to take every kind of food that is to be eaten and store it away as food for you and for them.

Not to count all the amphibians and reptiles, according to Mammal Species of the World, 5,416 species were known in 2006. These were grouped in 1,229 genera, 153 families and 29 orders.[1] In 2008 the IUCN completed a five-year, 1,700-scientist Global Mammal Assessment for its IUCN Red List, which counted 5,488 accepted species at the end of that period.

Thousand of these species would certainly have created an unprecedented chore for Noah and his followers.  Even in the modern times, no one has tried to accumulate them in one zoo.

Additionally, certain species are only specific to certain islands.  Before Noah could board on his ship, some where in Middle East, he would have first needed to collect kangaroos from Australia, lemurs from Madagascar and large tortoises from Galapagos islands. 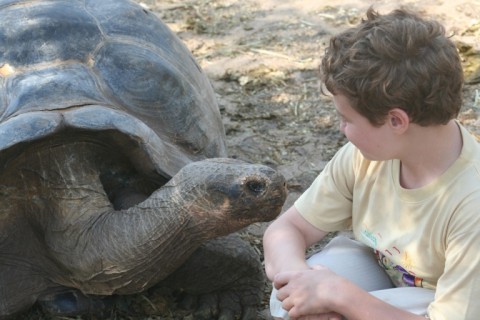 Such large tortoises are only found in Galapagos Islands

Noah would have needed to rescue all the 65 species of Kangaroos.  Encyclopedia Britannica describes the details for us:

In its broadest usage, kangaroo refers to any member of the family Macropodidae, which comprises about 65 species, including tree kangaroos and the quokka; rat kangaroos belong to a “sister” family, Potoroidae. The Macropodidae are found in Australia (including Tasmania and other offshore islands, such as Kangaroo Island), New Guinea, and the islands east to the Bismarcks. Several species have been introduced into New Zealand.

The Prophet Noah must have been a good naturalist, if we are to trust the account of the Bible, with all its literal details, the way they have been interpreted over the centuries, by faithful Christians.  He must have spent a fair amount of time, identifying and then capturing all forms of kangaroos in Australia and then bring them back to the Middle East before mounting the boat.

The Bible skipped these petty logistical details, especially if Noah had to go to the poles to bring a few polar bears!

Did he go to the north pole or the south pole, the Bible does not say?

The Holy Quran, on the other hand, gives a very simple and down to earth account of the incident and suggests to take a pair of every domesticated animal and that is how the following verses have been interpreted over the centuries, since the revelation of the Quran:

Till, when Our command came and the fountains of the earth gushed forth, We said, ‘Embark therein two of every kind, male and female, and thy family, except those against whom the word has already gone forth, and those who believe.’ (Al Quran 11:41)

Similar message is repeated in another verse of the Holy Quran:

So We sent revelation to him (Noah), saying, “Make the Ark under Our eyes and according to Our revelation. And when Our command comes, and the fountains of the earth gush forth, take thou into it two of every kind, male and female, and thy family, except those of them against whom the word has already gone forth. And address Me not concerning those who have done wrong; they shall be drowned. (Al Quran 23:28)

Here, every kind, of course means, every kind known to Noah and of use to him and his followers.

This is how the Muslims have always understood these verses.

We have saved the above video in the Muslim Times as well: