When Umar Cheema was being dragged off to be tortured after investigating Pakistan’s ISI secret services, it was his son and unborn child that he worried about most.

Umar, a 32-year-old reporter for the Pakistani paper The News, had been on his way home in Islamabad at 3am during Ramadan in September 2010 when two unmarked cars nearly drove him off the road. A dozen men in commando fatigues grabbed him, accused him of running over a pedestrian and forced him into one of the vehicles. They covered his face, handcuffed him and drove him around for an hour.

“I thought of my son,” he says. “My son was two years old then. And just thinking about my son – it started weakening me. I didn’t have any idea who picked me up, who these people were, or their intentions. In such a case, you realize you are being killed. What would happen to my son? Would he grow up an orphan?”

They dragged him into a building that was clearly not a police station. He could barely breathe because his face was covered so tightly. 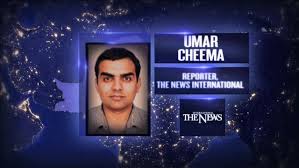