Martin Luther King Jr. Would have Stood Against Discrimination, Based on Religion

Epigraph: “O ye people! fear your Lord, Who created you from a single soul and created therefrom its mate, and from them twain spread many men and women; and fear Allah, in Whose name you appeal to one another, and fear Him particularly respecting ties of relationship. Verily, Allah watches over you.” (Al Quran 4:2) 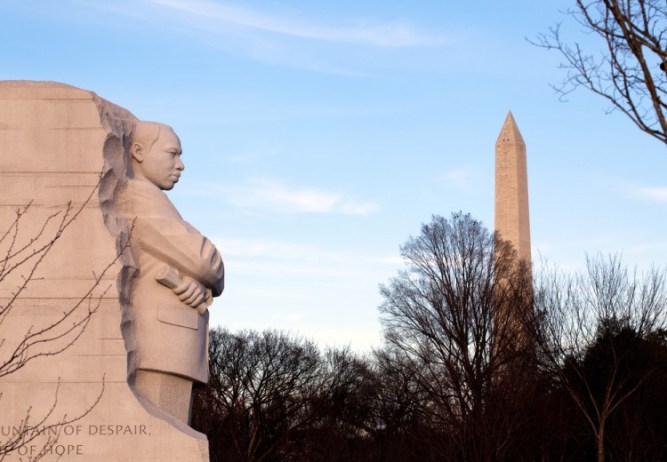 The Martin Luther King, Jr. Memorial is located in West Potomac Park in Washington, D.C., southwest of the National Mall

Today the nation is celebrating Martin Luther King Jr. Day, in USA.  At the age of thirty-five, Martin Luther King, Jr., was the youngest man to have received the Nobel Peace Prize. When notified of his selection, he announced that he would turn over the prize money of $54,123 to the furtherance of the civil rights movement.

He would have seen through the guise of any discrimination, as any strategy to divide the human family is a lie.  He said, “A lie cannot live.”

First I want to quote a few of his quotes about hate:

I have decided to stick with love. Hate is too great a burden to bear.

He would not have condoned discrimination and sat silent by the sidelines.  It was not in his blood:

History will have to record that the greatest tragedy of this period of social transition was not the strident clamor of the bad people, but the appalling silence of the good people.

Nothing in the world is more dangerous than sincere ignorance and conscientious stupidity.

In the End, we will remember not the words of our enemies, but the silence of our friends.

King’s I have a dream speech is regarded as one of the best in human history:

The official vision statement for the memorial notes:

Dr. King championed a movement that draws fully from the deep well of America’s potential for freedom, opportunity, and justice. His vision of America is captured in his message of hope and possibility for a future anchored in dignity, sensitivity, and mutual respect; a message that challenges each of us to recognize that America’s true strength lies in its diversity of talents. The vision of a memorial in honor of Martin Luther King, Jr. is one that captures the essence of his message, a message in which he so eloquently affirms the commanding tenants of the American Dream – Freedom, Democracy and Opportunity for All; a noble quest that gained him the Nobel Peace Prize and one that continues to influence people and societies throughout the world. Upon reflection, we are reminded that Dr. King’s lifelong dedication to the idea of achieving human dignity through global relationships of well being has served to instill a broader and deeper sense of duty within each of us— a duty to be both responsible citizens and conscientious stewards of freedom and democracy.[29]

Harry E. Johnson, the President and Chief Executive Officer of the memorial foundation, added these words in a letter posted on the memorial’s website:

The King Memorial is envisioned as a quiet and peaceful space. Yet drawing from Dr. King’s speeches and using his own rich language, the King Memorial will almost certainly change the heart of every person who visits. Against the backdrop of the Lincoln Memorial, with stunning views of the Tidal Basin and the Jefferson Memorial, the Memorial will be a public sanctuary where future generations of Americans, regardless of race, religion, gender, ethnicity or sexual orientation, can come to honor Dr. King.[30]

Martin Luther King, Jr., (January 15, 1929-April 4, 1968) was born Michael Luther King, Jr., but later had his name changed to Martin. His grandfather began the family’s long tenure as pastors of the Ebenezer Baptist Church in Atlanta, serving from 1914 to 1931; his father has served from then until the present, and from 1960 until his death Martin Luther acted as co-pastor. Martin Luther attended segregated public schools in Georgia, graduating from high school at the age of fifteen; he received the B. A. degree in 1948 from Morehouse College, a distinguished Negro institution of Atlanta from which both his father and grandfather had graduated. After three years of theological study at Crozer Theological Seminary in Pennsylvania where he was elected president of a predominantly white senior class, he was awarded the B.D. in 1951. With a fellowship won at Crozer, he enrolled in graduate studies at Boston University, completing his residence for the doctorate in 1953 and receiving the degree in 1955. In Boston he met and married Coretta Scott, a young woman of uncommon intellectual and artistic attainments. Two sons and two daughters were born into the family.

In 1954, Martin Luther King became pastor of the Dexter Avenue Baptist Church in Montgomery, Alabama. Always a strong worker for civil rights for members of his race, King was, by this time, a member of the executive committee of the National Association for the Advancement of Colored People, the leading organization of its kind in the nation. He was ready, then, early in December, 1955, to accept the leadership of the first great Negro nonviolent demonstration of contemporary times in the United States, the bus boycott described by Gunnar Jahn in his presentation speech in honor of the laureate. The boycott lasted 382 days. On December 21, 1956, after the Supreme Court of the United States had declared unconstitutional the laws requiring segregation on buses, Negroes and whites rode the buses as equals. During these days of boycott, King was arrested, his home was bombed, he was subjected to personal abuse, but at the same time he emerged as a Negro leader of the first rank.

In 1957 he was elected president of the Southern Christian Leadership Conference, an organization formed to provide new leadership for the now burgeoning civil rights movement. The ideals for this organization he took from Christianity; its operational techniques from Gandhi. In the eleven-year period between 1957 and 1968, King traveled over six million miles and spoke over twenty-five hundred times, appearing wherever there was injustice, protest, and action; and meanwhile he wrote five books as well as numerous articles. In these years, he led a massive protest in Birmingham, Alabama, that caught the attention of the entire world, providing what he called a coalition of conscience. and inspiring his “Letter from a Birmingham Jail”, a manifesto of the Negro revolution; he planned the drives in Alabama for the registration of Negroes as voters; he directed the peaceful march on Washington, D.C., of 250,000 people to whom he delivered his address, “l Have a Dream”, he conferred with President John F. Kennedy and campaigned for President Lyndon B. Johnson; he was arrested upwards of twenty times and assaulted at least four times; he was awarded five honorary degrees; was named Man of the Year by Time magazine in 1963; and became not only the symbolic leader of American blacks but also a world figure.

At the age of thirty-five, Martin Luther King, Jr., was the youngest man to have received the Nobel Peace Prize. When notified of his selection, he announced that he would turn over the prize money of $54,123 to the furtherance of the civil rights movement.

On the evening of April 4, 1968, while standing on the balcony of his motel room in Memphis, Tennessee, where he was to lead a protest march in sympathy with striking garbage workers of that city, he was assassinated.

Martin Luther King Jr said in I have a dream speech, “I have a dream that one day this nation will rise up and live out the true meaning of its creed: ‘We hold these truths to be self-evident: that all men are created equal.'”  This dream extends, not only to domain of race, but, also religion and creed.  It extends to not only the Christians wearing a cross, but also to Muslim women wearing a Hijab, to Sikh men wearing a turban or Jewish men wearing yarmulke and agnostics and atheists wearing symbols of science, technology or humanism.

Seeking equality and justice is not only the business of every minority but of each and every citizen of our global village.  King also said:

Every man must decide whether he will walk in the light of creative altruism or in the darkness of destructive selfishness.