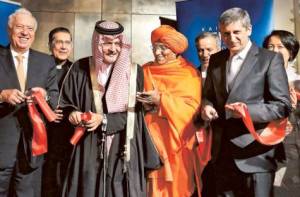 Vienna: Dialogue between religions is as necessary as ever in light of recent conflicts, UN chief Ban Ki-moon said on Monday to mark the opening in Vienna of a new centre aimed at promoting such dialogue.

Backed by Saudi Arabia, the King Abdullah Bin Abdul Aziz International Centre for Interreligious and Intercultural Dialogue (KAICIID), has been the subject of criticism ever since its formal creation last year.

But supporters were keen to highlight its relevance at a glitzy event at Vienna’s Hofburg palace.