Unable to win US support for a figurative ‘red line’ on Iran’s nuclear program, Israeli PM Benjamin Netanyahu drew a literal one during a speech to the UN General Assembly, and offered an apocalyptic vision of a nuclear bombing of Israel.

Netanyahu used a large diagram of a cartoonish bomb to represent Tehran’s alleged ambition to create a nuclear weapon. The drawing was divided into three sections, with marks indicating 70 percent and 90 percent of the uranium enrichment required to build an atomic bomb.

“Iran is 70 percent of the way there, and are well into the second stage. By next summer, at current enrichment rates, they will have finished the medium enrichment and move on to the final stage. From there it is only a few more weeks before they have enriched enough for a bomb,” he said. 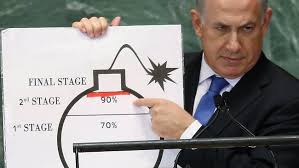