MADINAH: Custodian of the Two Holy Mosques King Abdullah laid the foundation stone for the largest expansion of the Prophet’s Mosque here yesterday. The new project will increase the mosque’s capacity to more than two million worshippers.

King Abdullah arrived here last night from the Moroccan city of Casablanca and was received at Prince Muhammad International Airport in Madinah by Crown Prince Salman, deputy premier and minister of defense.
Other dignitaries who were present at the airport to receive the king were Interior Minister Prince Ahmed, Chief of the Presidency of Meteorology and Environment Prince Turki bin Nasser and Deputy Defense Minister Prince Khaled bin Sultan.

Addressing the stone-laying ceremony at the mosque’s courtyard, Sheikh Abdul Rahman Al-Sudais, chief of the Presidency of the Two Holy Mosques, commended King Abdullah for launching the largest expansion of both Haram mosques in Makkah and Madinah.

The new expansion project, ordered by King Abdullah, would be carried out in three phases. The first phase will increase its capacity to more than 800,000 worshippers while the second and third phases will give room for more than a million worshippers, media reports said.

A number of hotels and buildings in the area would be demolished to create enough space for implementing the huge expansion project. The newspaper put the total amount to be paid to property owners in compensation at SR 25 billion.

In order to carry out the expansion, the Madinah Development Authority will have to remove 23 hotels from the central area around the mosque, one report said, adding that the removal of those hotels would create a shortage of 4,760 rooms to accommodate those who visit the mosque.

The MDA has played down the effect of losing such a large number of rooms, saying 21 new hotel projects would be completed this year to make up for the shortfall.

“King Abdullah’s visit reflects the cohesion between the Saudi leadership and people and his desire to enhance the prosperity of citizens in the region,” he added.

Madinah residents have expressed their happiness over King Abdullah’s visit. “We have been looking forward to this royal visit,” said Adnan Al-Mazroue, president of Taibah University. He praised the king for implementing a large number of welfare and development projects in various parts of the country. 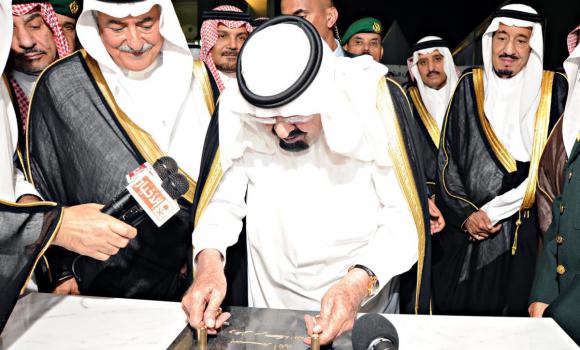 Custodian of the Two Holy Mosques King Abdullah lays the foundation stone for the largest expansion of the Prophet’s Mosque in Madinah on Monday night. (SPA)