Gaza – PNN – Hundreds of Palestinian moved in and out of the Gaza Strip on Saturday as the Egyptian Authorities reopened the Rafah crossing with the Gaza Strip after four years of closure. 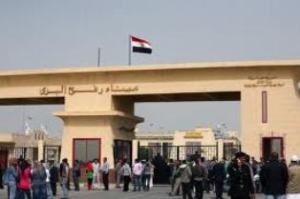 As Palestinian residents expressed happiness and hope that the opening of Rafah border crossing with Egypt will ease the Israeli siege, the Israeli government criticized the move by the Egyptian government.
Addressing Israeli and EU concerns, Ghazi Hamad, director of the border crossing in the Hamas government in Gaza, told reporters today that weapon smuggling will not be allowed adding that the crossing will be only used for the movement of people.

“The opening of Rafah crossing will not end the suffering of the residents but will help to ease its effect on them” Hamad added.

The Israeli government announced that it is concerned that the crossing is being operated without international supervision. Israeli sources also expressed fear that this may be a change of the relationship between Egypt and Israel in a post-Mubarak era.

Responding to the Israeli government, Egyptian government sources said that Israel has no right to interfere between Egypt and the Palestinian Authority in both the West Bank and Gaza adding that Israel’s siege that is “suffocating” 1.5 million Palestinians living in Gaza is illegal