Natural disasters a Divine Sign of the truthfulness of Hadhrat Mirza Ghulam Ahmad, the Founder of Ahmadiyya Muslim Community 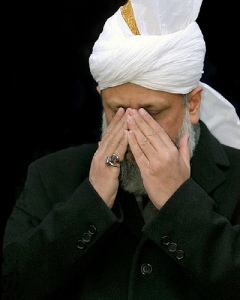 “Whenever any natural disaster occurs in the world, those who fear God are frightened lest any such future disaster puts them in difficulty. That any act of theirs may become a source of God’s displeasure. Such thinking is only of true believers who have the insight and the perception that God does not need anyone and thus, with fear of God in their hearts, they try and tread the paths that lead to His pleasure. God states in the Holy Qur’an: ‘Indeed, those who, out of fear of their Lord, always stand guard against sins. And those who believe in the Signs of their Lord,’ (23:58-59). The Surah goes on to state that these people do not ascribe partners to God and are not those who only remember God in difficult, turbulent times and forget Him in peaceful times. They turn to God with greater intensity in times when they face difficulties or observe climatic changes.”

The Promised Messiah (on whom be peace) wrote:

‘Bear in mind that God has informed me time and again about the coming of earthquakes. So be sure that just as there have been earthquakes in America and in Europe, in keeping with the prophecies, so will they occur in different parts of Asia, and some of them will be as terrifying as doomsday. There will be death on such a large scale that rivers will run with blood, and even birds and animals will not escape it. Such destruction will overtake the earth as had not happened since man was born. Most places will be turned upside down as if they had never been inhabited. There will also be other terrible afflictions, both in heaven and earth, and every sensible person will realize that they are no ordinary phenomena, and no trace of them will be found in books of astronomy or philosophy. Then people will be seized by anxiety and they will wonder what is going to happen? Many will be saved, and many will perish. Those days are near, indeed they are at the door, when the world shall witness a spectacle of doomsday. Not only will there be earthquakes, but other terrible calamities will also appear, some from heaven and some from the earth. This will happen because men have given up the worship of their God, and all their thoughts and their designs and their resolves are diverted towards the world. Had I not come, these calamities might have been delayed for a while, but with my coming the secret designs of God’s wrath, that had long been hidden, have been manifested.

As God said: ‘We never punish until We have sent a Messenger.’ (17:16) Those who repent shall find security and those who fear before the calamity overtakes them will be shown mercy. Do you think that you will be safe from these earthquakes, or that you can save yourselves by your own designs? No, you cannot. All human designs will come to naught that day. Do not imagine that only America has been shaken by the earthquake and that you are safe, for you may experience even greater calamities. O Europe! you are not secure, O Asia! You are not secure, O you who dwell in the Islands, no artificial god will come to your aid. I see the cities falling and I see the habitations in ruin. The One and the Unique has long remained silent. Abominations were committed before His eyes and yet He remained silent. But now He shall reveal His countenance in a dreadful manner. He who has ears to hear, let him hear! The hour is not far. I tried to bring everyone under the security of God, but the decrees of destiny had to be fulfilled. Assuredly, I say that this country’s turn is also drawing near. The days of Noah shall appear before your eyes, and you will see with your own eyes what happened to the land of Lot. But God is slow to wrath, repent so that you are shown mercy. He who abandons God is a worm, not a man, and he who does not fear Him is dead, not alive.’ [‘Haqiqat ul Wahi’ – Essence of Islam, Vol. V, pp. 148 – 150] (Friday Sermon 18th March 2011)

Please find more details on this subject through the following links.

Read a report about the Natural Disasters of 2010:

Read a report of BBC Urdu about the Natural Disasters of 2010: