The trip could have killed them. But people fleeing economic wreckage in the Middle East say they’d do it 100 times over

(CNN)Four-year-old Azhi hobbles across a makeshift migrant center on the Polish-Belarusian border. Grabbing his mother’s hand for support, he carefully tucks his legs under piles of donated blankets. Metal rods tower above the people to prop up a giant zinc roof. Azhi, who has splints on his legs, is smiling and wide-eyed. It’s hard to tell that just days before, the boy’s family faced the specter of death.”We want to go to Germany so Azhi can get an operation,” says his mother, 28-year old Shoxan Hussein. “The doctors said he needs to get it done before he turns five.” 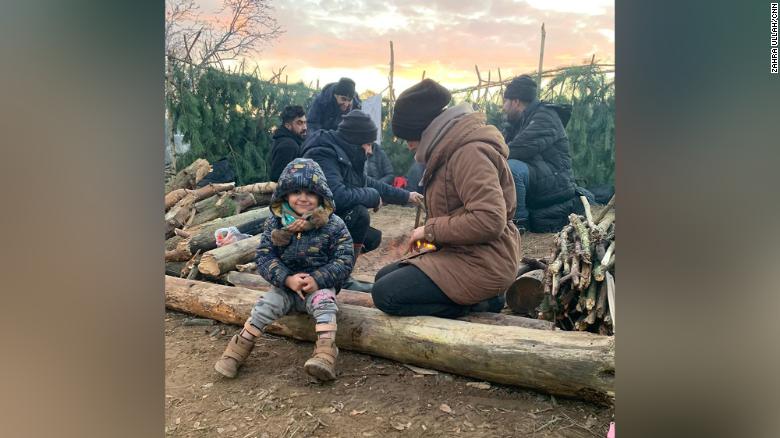 Four-year-old Azhi and his mother Shoxan Hussain, 28, traveled to Belarus from Iraqi Kurdistan. Azhi’s family was among hundreds of migrants who attempted to cross into Poland from Belarus in recent weeks with hopes of claiming asylum in the European Union. After days in the freezing Belarusian forest where migrants say they were subjected to beatings and food deprivation by Belarusian forces, the family never made it across the border. Several people died along the journey while thousands were stranded in inhumane conditions. Azhi and his parents survived unscathed.

Days later, they returned to their native Erbil, the commercial hub of Iraqi Kurdistan, on an Iraqi repatriation flight. They are already trying to chart a new path into Europe. “There is no future for my son in Iraq,” Azhi’s father, 26-year-old Ali Rasool, tells CNN from his Erbil home. “Trying to get to Europe is for Azhi. I need a future for my kid.

Breaking a cycle of misery

Across the Middle East and North Africa, talk of emigration is rampant. Though guns have largely fallen silent in most of the region’s conflict zones, much of the misery has not let up. Violence that once engulfed four countries — Syria, Libya, Yemen and Iraq — has given way to economic wreckage that extends well beyond their borders. Many regional economies have been reeling from the combined effects of the Covid-19 pandemic, refugee influxes and political instability.Government corruption in the MENA region is widely viewed as a main culprit, in addition to geopolitical turbulence.

A recent survey found that one in three of the region’s 200 million Arab youth are considering emigration. In 2020, that figure was even greater, at nearly half of all Arab youth.The problem is most acute in post-conflict zones contending with economic depression and where corruption has flourished. In Syria, the United Nations Development Program says that poverty rates are now around 90%, up from around 50-60% in 2019 when violence was significantly more widespread. People who were considered to be food insecure increased from 7.9 million in 2019 to over 12 million in 2020. 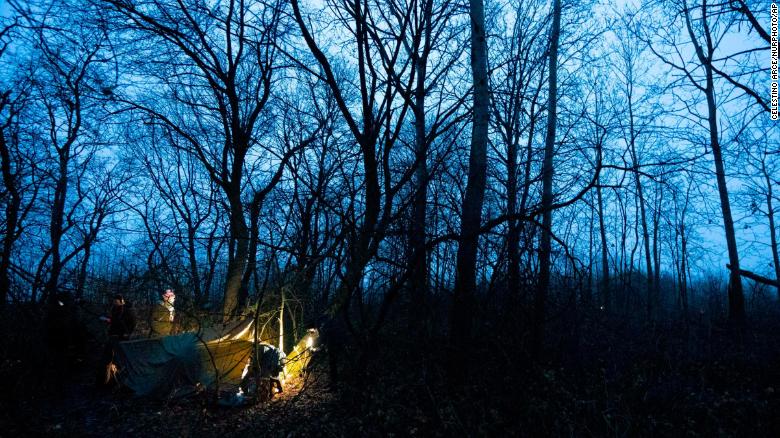 An improvised plastic tent gives shelter to Syrian refugees in the forests of Poland on November 26, 2021.”We’re talking about people who have incomes, a working poor, with one job, with two jobs in the family, who are unable to meet their basic food needs,” UNDP Resident Representative in Syria Ramla Khalidi tells CNN. “What that’s meant is they’re skipping meals, they’re going into debt, they’re consuming cheaper, less-nutritious meals.”Around 98% of people have reported food as their top expenditure.

“Fresh fruits and vegetables are a luxury and they’re skipping meats in their diet,” says Khalidi.Syria’s “massive and severe poverty” has been exacerbated by the financial tailspin in neighboring Lebanon which began in 2019. The Lebanese economy was previously seen as a lifeline for a financially and diplomatically isolated Damascus. A crushing sanctions regime on areas under the control of Syrian President Bashar al-Assad, which is most of the country, was compounded by the Caesar Act in 2020. This aimed to drive Syrian President Bashar al-Assad back to the UN-led negotiating table but it has instead further devastated an already floundering economy, and the President’s rule continues unfazed.

The Syrian regime is widely accused of having repeatedly committed war crimes and crimes against humanity in the last 10 years of the country’s war, including attacks on the civilian population with chemical weapons and indiscriminately shelling populated areas under rebel control with conventional munitions. Tens of thousands of political prisoners have died in Assad’s prisons after having been subjected to extreme torture and mistreatment. 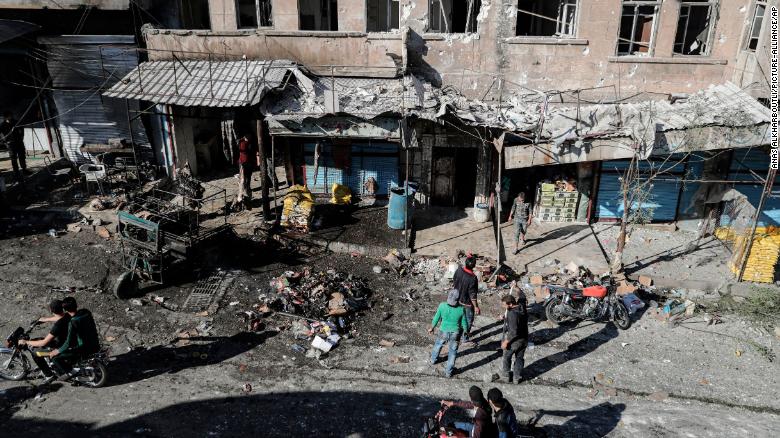 Syrians inspect rubble at a site that was targeted by shelling in Ariha, allegedly carried out by Syrian government forces, killing at least 10 people, on October 20, 2021.In parts of Syria that fall outside of Assad’s rule — namely the country’s Kurdish-controlled northeast and the northwest which is under the sway of fundamentalist Islamist rebels — the economy is also in tatters.

“That’s the only thing that people still share in Syria. Everyone’s suffering economically no matter who controls the areas,” says Haid Haid, consulting associate fellow at Chatham House’s Middle East and North Africa Programme.It’s a situation that has prompted many of the country’s skilled workforce to leave, deepening the economic predicament, says the UN’s Khalidi.”The hospitals, the schools, the factories have lost a lot of their skilled workers because many of these individuals are trying to find their way out even if it means risking their lives,” she says, whilst calling on donor countries to invest in “resilience interventions” aimed at enhancing urban and rural livelihoods.”

It’s an unprecedented crisis in terms of its complexity,” says Khalidi. “Year on year the amount of funding has increased and yet we see humanitarian needs also increasing, so I think we need to change the model, reduce humanitarian dependence and focus more funding on early recovery and resilience efforts. “In neighboring Iraq, ravaged by multiple battles including a devastating war with ISIS, the economy has fared better, but a sense of hopelessness prevails. A youth-led anti-corruption protest movement in October 2019 was lethally crushed and co-opted by major political players, and while independent politicians made unprecedented gains in this year’s parliamentary elections, nepotism and corruption continue to reign supreme in the country’s political and commercial centers, analysts say.”

We cannot talk about Kurdistan or Federal Iraq as a functioning thing because it’s not,” said Hafsa Halawa, non-resident scholar at the Middle East Institute, referring to the northern semi-autonomous region of Iraqi Kurdistan. “The reality is that public services are intermittent, opportunity is zero, corruption, nepotism and violence is ongoing and regular.””What is wrong with someone who’s 21, 22 saying ‘I cannot stay here like my parents did. I have to break the cycle. I have to change things for my future family, for my future kids’?” 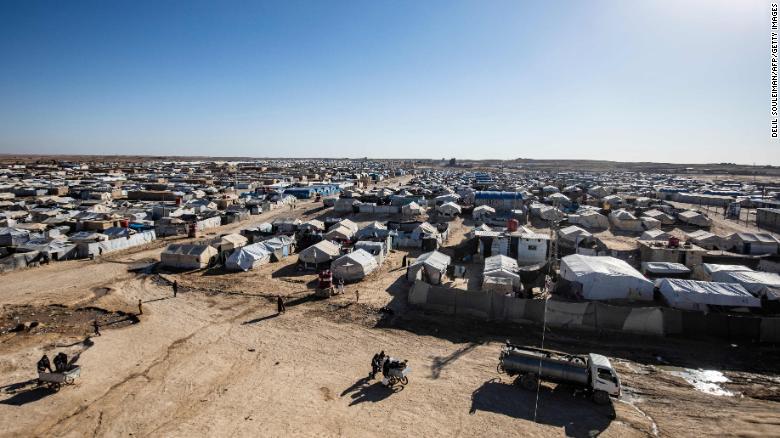 A picture shows the Kurdish-run al-Hol camp, which holds relatives of suspected ISIS fighters in the northeastern Hasakeh governorate, on December 6, 2021.Halawa, who is British-Iraqi-Egyptian, argues that a major driver of the influx of refugees is the disappearance of legal mechanisms for the entry of skilled workers into Europe.”

The fascinating thing to me — if I’m talking about the UK and (Home Secretary) Priti Patel’s immigration point scheme that she introduced — is that my father as a qualified surgeon who went on to serve the NHS for 40 years, would not have qualified for a work visa when he arrived here,” says Halawa.”The mechanisms by which we — in the developed world — allowed people to learn and then keep them here to benefit society are no longer available,” says Halawa.

Chatham House’s Haid, a native Syrian, considers himself among the lucky ones. Nearly five years ago, he was granted refugee status in the UK. He says the images of Syrians dying in the English Channel gave him mixed feelings of sadness and personal relief. He also believes that the migration of Syrians will continue unabated.”

When things (in Syria) started getting worse despite the decline in violence, that’s when people living there were hit by the reality that things will never get better,” says Haid. “That’s why even those who were refusing to leave the country during the war now feel that there is no solution but to flee, because there is no light at the end of the tunnel. That’s it.”At the same time, Haid feels like he made it to the UK in the nick of time. “You feel lucky to have made it before your window of opportunity, which was rapidly closing, is shut forever,” he says.

Back in Erbil, Shoxan Hussein and her husband Ali Rasool believe legal passage to Europe is permanently shut. Rasool, a manager of a property company, and Hussein, an engineer, applied for a visa at the French embassy earlier this year but say they never received a response.

“Erbil is better for me and my wife than anywhere else in the world. We have a good car, good clothing,” says Rasool. “But this is all for Azhi … we’ve already done three operations here and have gotten no results. The problem is that (the doctors) are taking money from us and they haven’t made even 5% difference.””If you told me to risk my life 100 times before I got to Europe to improve my son’s life then my wife and I would do it,” he says. “I would repeat this journey 100 times.”

CNN’s Zahra Ullah and Matthew Chance contributed to this report from the Bruzgi-Kusnica border region in Belarus.