For US Mormons, religiosity has declined over time, study shows

Mormons are still more religious than the nation as a whole, but not as devout as they used to be.

(RNS) — In 2008 more than three-quarters of U.S. Latter-day Saints said religion was “very important” to them, but by 2020 that had declined to just under 62%, according to the national Cooperative Election Study as analyzed by sociologist Ryan Burge of Eastern Illinois University. 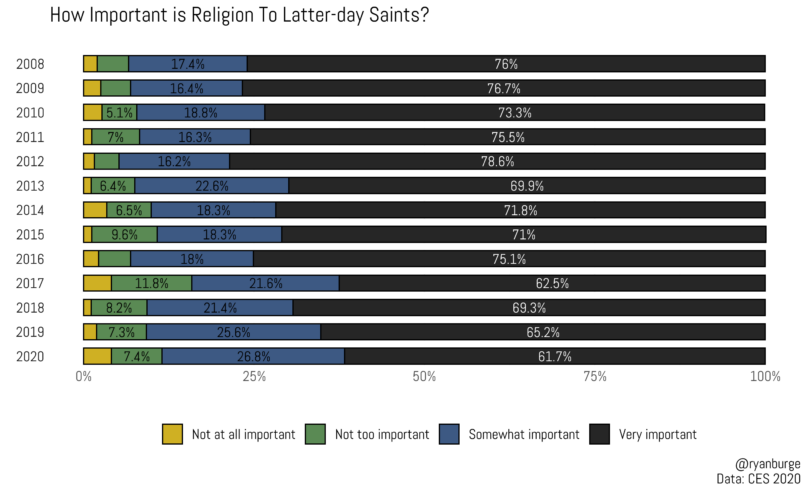 This finding, drawn from nearly 7,000 LDS total respondents over the course of 12 years, is in line with what is happening to other religious groups in the United States. More people are leaving religion, and many of those who stay are characterizing themselves as less religious than they once did. In terms of long-term trends in America, here’s a telling factoid: In 1952, Gallup found that 72% of Americans ranked religion as “very important” in their lives, and by 2018 that had dropped to 51%.

Mormons, it would seem, are still more deeply religious than the nation as a whole, but not quite as devout as they used to be. And that’s not even factoring in the possible effect of COVID-19 on religiosity, which future studies can track.

There are some silver linings in the data. For example, while the percentage of Mormons who rank religion as “very important” in their lives shows a clear decline, if you add together the percentage who said it was “somewhat important” with those who called it “very important,” that hasn’t changed too much. In 2008, 93.4% of U.S. Mormons said their religion was either very or somewhat important to them. In 2020, that same combination yielded 88.5%.

So basically, roughly 9 out of 10 Latter-day Saints in the United States still say religion is important to at least some degree.

There were other interesting findings. I asked Burge to investigate whether the data showed generational difference, with the theory that these declines might be outsized among young adults, with older Mormons holding steady.

However, that did not seem to be the case. There was not a big gap between the under-40 group (the solid blue line) and the over 40s (the dotted red line). In fact, only a few points separated them. This means that it is not a simple story of young people driving the drop in enthusiasm for religion. Instead, the decline seems to be spread across all age groups. 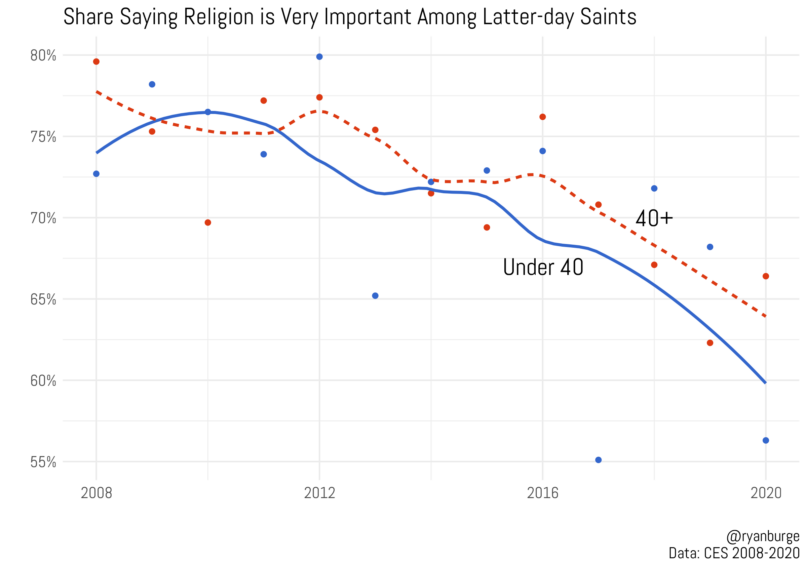 Those are findings about people who say they are members of The Church of Jesus Christ of Latter-day Saints. How many members are there? The CES and other national studies can shed some light on that question.

And it’s good we have this data, because the church itself appears to have stopped providing it. Normally the church releases its global membership number during the April General Conference and then follows up with country-by-country information less than a week later. This year it did the first (global numbers), but not the second, for the first time in my memory. The worldwide number showed a slight increase in membership around the globe, but it did not provide the country-by-country statistics that are so important for researchers. I requested that information in April and was told the numbers would be forthcoming, but they have not appeared after seven months.

My worry is that they never will, because the church does not have a history of dealing with membership declines. In fact, back in the 1980s and 1990s, when some other churches were beginning to show declines, Mormons routinely congratulated ourselves on being the Lord‘s true church as evidenced by the fact we continued to grow. When the numbers become flat or even fall into negative territory, what does that do to a triumphalist theology that has been predicated upon having success after success?

In any case, the church’s official membership data is always going to be higher than the number of people who claim a Latter-day Saint religious identity on a national survey. In the LDS church, people stay on the membership rolls until the age of 110 unless they are excommunicated or have gone through the formal process of requesting their records be removed. Most people who stop attending do not pursue that formal channel, meaning many more people are officially members of the church than would identify themselves that way on a survey.

Even understanding that inflation, the church’s official rolls have still been an excellent way to chart trends over time. For example, here are the membership statistics for the United States for the last several years:

What we see is that even before the disruptions of the pandemic, the church’s rate of annual growth in the U.S. had been gradually slowing. An educated guess would be that with the suspension of missionary work and the many disruptions COVID brought to the church’s efforts in 2020, the church in the U.S. entered negative growth for the first time since 1857.

The CES confirms the general trend of more people leaving Mormonism, as a smaller share of the population claims an LDS identity now than in the past. 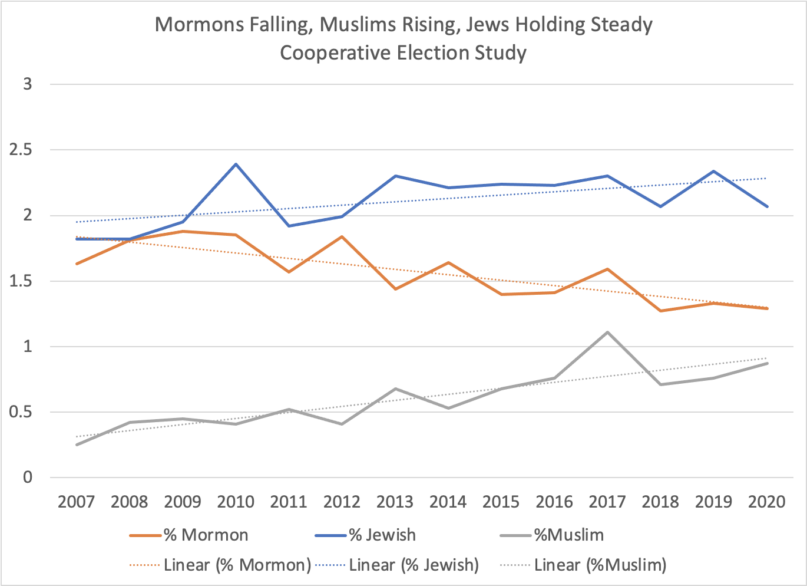 For the last three years, about 1.3% of Americans have said they were Mormons. This is a decline from the earlier years of the study; for instance, from 2008 to 2010, 1.8% or 1.9% of the population identified this way. As political scientist David Campbell of the University of Notre Dame has analyzed the Congressional Election Study, the trend line for Mormons shows some decline compared with two other minority religions over the same period. Jews have held steady and even increased their share of the population slightly, and Muslims have roughly doubled their share, from just below half of a percent to just below 1% of Americans.

On the face of it, moving from roughly 1.8% of the population to roughly 1.3% doesn’t sound like a huge decline. That’s not great news, even if it is entirely predictable based on what’s happening with other Christian religions these days.

Why so many Mormon temples when LDS growth is flat?