US exploited 9/11 to reshape Islamic world, but ended up weaker 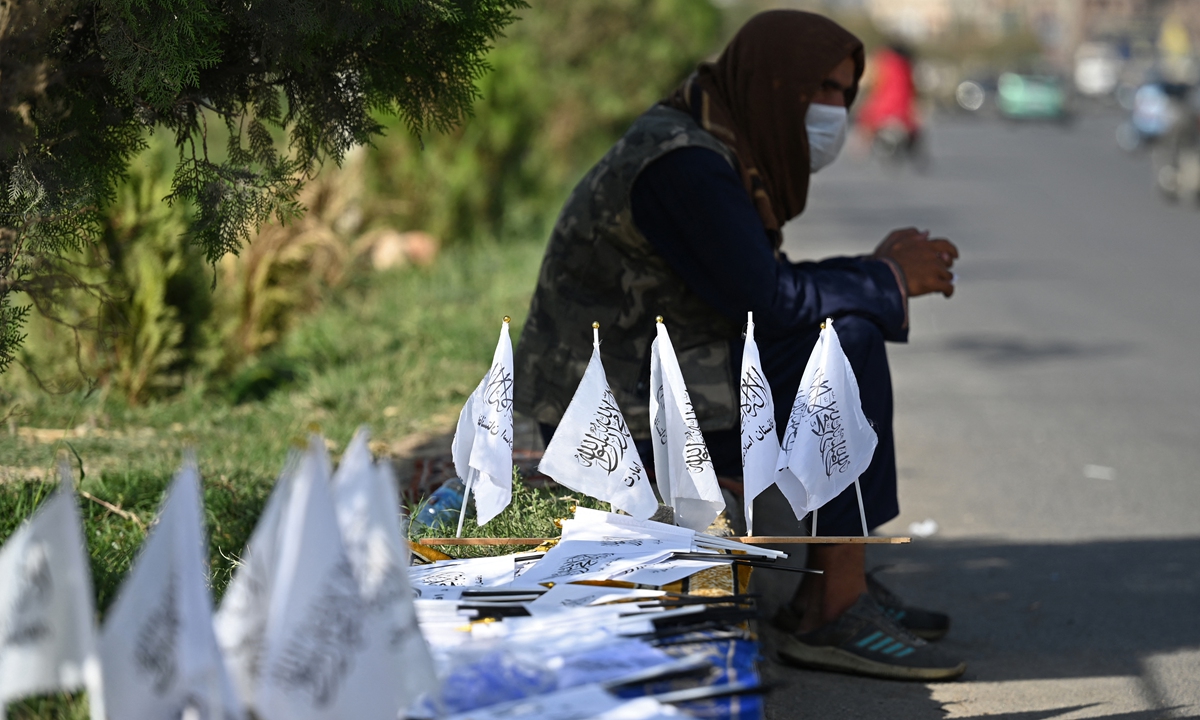 A vendor selling Taliban flags waits by the roadside in Kabul on Thursday. Photo: AFPThe end of the Cold War constituted a major international variable in its impact on the American strategy in the world in general and in the Middle East and Islamic world in particular. We mean the Islamic world as a wide region which enjoys its specifications, structures, complexities and paths that link the East to the West. An Islamic world is composed of a group of diverse regions.

The Islamic world in particular is one of the richest regions in the world with its oil wealth, and it is in the middle of the near and Far East.

The Islamic world is considered a strategic region from a political and economic point of view because it contains the most important sea straits in the world. In addition, this region contains the most important American interests in the world, represented by the presence of Israel in it, and the richness of the Middle East region in oil, as it possesses the largest production and oil reserves in the world – and this shows the political and economic importance of this region.

The 9/11 terror attack was a decisive point in re-formulating the American strategy in the Islamic world, as the events of September 11 were considered a transit point between two different international systems, crossing the post-Cold War order to the new order, which was so-called “the war on terror”.

On this basis, the 9/11 attacks were an influential change on the American global strategy in general and the American strategy toward the Islamic world in particular. These events produced the reality of military power as a force that controls the situation and sets it on the American tone.

As a result of the so-called war on terror, the US began to market daily the new political geography that it intended to impose on the world by military force to achieve hegemony. It was the starting point of the American strategy to redraw the map of the Islamic world, Middle East and Central Asia to expand the area of American hegemony.

The Islamic world is not only the field in which the US demonstrates its strength and tests its weapons, but it is also the site from which the US circulates a new formula for the new world order under the pretext of what so-called war on terror as a justification used by the US to resort to military force in Islamic world.

Here, we can as well notice the same expression used by the American administration at the beginning of the new American campaign against the Islamic world, which began many years ago in Afghanistan and Iraq.

This vision was prepared even before the 9/11. This confirms that the developments were prior arranged and the ideas were ready and waiting for the moment of their theatrical release into existence.

The 9/11 attacks came to be an opportunity for the emergence of this American scheme. As is clear, the ideological dimension is in the American vision that was expressed by politicians and thinkers in an important book which entitled: America and Political Islam: Clash of Cultures or Clash of Interests?

What is known as religious coups and the emergence of radical terrorism is one of the most prominent transformations in the global scene after Al Qaeda’s attack on the heart of modern Western capitalist civilization in New York. After the return of the Taliban movement to power in Afghanistan, many questions have been raised about the lessons learned from the post-9/11 years on the world.

Prior to the 9/11 attacks, political crises depended on solving these problems through international or diplomatic organs. But after the events, the military sides became dependent on a new principle – preventive war – which relied on surprise strikes without waiting for confirmed evidence of the hostility of the target party.

Then US secretary of defense Ronald Rumsfeld implied at an important NATO meeting in Brussels in 2002 that the alliance cannot wait for irrefutable evidence to act against terrorist groups or countries that possess chemical, biological or nuclear weapons. He said “the absence of evidence is not evidence of absence… Simply because you do not have evidence that something exists does not mean that you have evidence that it doesn’t exist.”

This statement was a prelude to the invasion of Iraq in 2003, and a preemptive strike according to the new concept of the US military doctrine.

Accordingly, we can conclude and reach out here to say that all the wars led by the US in the name of spreading Western values, democracy, modernity, and human rights, are all American strategies and tools that have proven to be unsuccessful. Therefore, many theories have appeared today, rejecting and emphasizing the futility of the theory of the clash of civilizations.

Noting that after two decades of the 9/11 attacks, and the failure of the US to achieve its goals in Afghanistan, the control of the Taliban movement and the strengthening of ISIS in the Islamic world. This is what led to the collapse and decline of the power of the US and the loss of confidence in America’s political machinery.

This is the general attitude toward Washington in the Islamic world and the Middle East region, especially after the American escalation of its dispute with Saudi Arabia and its accusation, after two decades, of being involved in the 9/11. This, after all, led to the religious, moral and ideological collision between the Muslim world and the Arab Gulf states in the face of US. It was due to the failed American mechanisms in the region.

So, Afghanistan is not just a war that went wrong, as the many mistakes in the American war in Afghanistan are shared by four American presidents.

The author is associate professor of political science, Faculty of Politics and Economics of Beni Suef University in Egypt. She is an expert in Chinese politics, Sino-Israeli relationships, and Asian affairs, a visiting senior researcher at the Centre for Middle Eastern Studies (CMES) of Lund University in Sweden, and director of the South and East Asia Studies Unit. opinion@globaltimes.com.cn