African Colonies after the Berlin Conference 1884 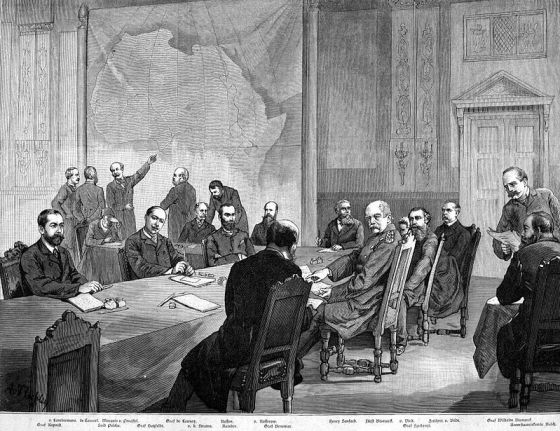 1884-85 was a significant year for Africa and African people. The Berlin Conference took place in Germany and it was here that European nations divided African land into territories for themselves.

By François Maréchal – Le Frondeur (Liège, Belgium), 20 December 1884,
For context, by 1884 the trans-Atlantic slave trade had been practiced for a few hundred years.

Millions of African scientists, physicians, architects, artists and philosophers were taken away to the “New World” to work European plantations in America.

When Europeans expropriated African land, they separated cultural and linguistic communities into new “states”. Ancient African systems of social organisation were suppressed to make way for the new colonial economy.

The borders of African states today were created by Europe. Many youth and adults do not know this fact.

These borders only benefit politicians and prevent the masses of Africans from working together.

By Gartenlaube 1884. Retrieved from deutsche-schutzgebiete.de.,
In order to reverse continental poverty and the trans-Atlantic slave economy, Africans will have to unite across these borders until they no longer divide us. We must unite with our Family in the Diaspora as well.