US shakes up Yemen policy, but long road to peace

Supporters of Yemen’s Houthi movement gesture as they chant slogans during a demonstration against the outgoing US administration’s decision to designate the Iran-backed rebels as terrorists, in the capital Sanaa on January 20 (AFP photo) 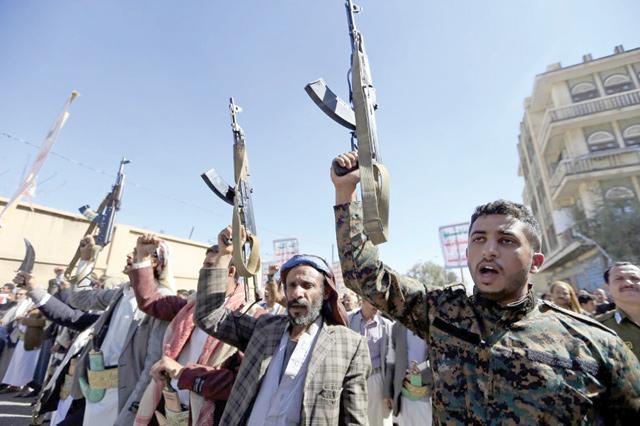 RIYADH — President Joe Biden has shaken up US policy on Yemen by ending support for Saudi-led offensive operations and de-listing the Huthi rebels as a terrorist group, but a swift end to the six-year conflict is highly unlikely.

Biden’s decisions last week mark a reversal of policies by his predecessor Donald Trump, a staunch backer of Saudi Arabia and a fierce opponent of rebel supporter Iran.

What are the implications of the new US approach?

Is this a game-changer?

Biden, who has also halted some weapons sales to Saudi Arabia, called Yemen’s war a “catastrophe” which “has to end”.

Riyadh led a military coalition into Yemen in 2015 to prop up the government, but it has struggled to oust its highly motivated guerrilla opponents.

On Sunday, the latest in a string of armed Houthi drones was intercepted heading for the kingdom, the day after the US moved to delist the rebels as terrorists.

Given Yemen’s complex dynamics, analysts say the challenge is finding a compromise acceptable to its myriad armed factions.

“The million dollar question in Yemen [is] how to end all of its overlapping wars?” asked Gregory Johnsen, who has written widely on US policy in the country.

“The US has clear and obvious leverage with Saudi Arabia. It is much less clear what leverage the US has with the Houthis.”

How can the US help?

The appointment of veteran diplomat Timothy Lenderking as a US special envoy for Yemen is expected to boost efforts to end the war.

Biden said Lenderking would support a UN push for a ceasefire and revive talks between the Houthis and the government.

The rebels say delisting them as a terrorist organisation was a “step towards peace”, but warned they must also be included in negotiations.

Iran cautiously welcomed the US decision to limit support for its arch-foe Saudi Arabia, saying that could help fix “past mistakes”.

But not everyone is convinced.

“The expectation is that Houthis will reciprocate & engage in peace talks in good faith. But that is not how Houthis will interpret this,” Dawsari tweeted.

“Only leverage will force them to change. Biden just lost that for nothing.”

What about the humanitarian crisis?

The US State Department said the “terror group” label could accelerate a humanitarian crisis in a country on the edge of famine, a view echoed by aid agencies.

“The designation did not impact the Houthis in any practical way, but it stopped food and other critical aid from being delivered inside Yemen and would have prevented effective political negotiation,” US Senator Chris Murphy said at the weekend.

The grinding war in Yemen has killed tens of thousands and displaced millions, triggering what the United Nations calls the world’s worst humanitarian disaster.

Mercy Corps’ chief executive Tjada D’Oyen McKenna urged Lenderking to “redouble US and international efforts to increase humanitarian access in order to reach millions of Yemenis in need of food, medical care, and other essential services”.

What does Saudi Arabia do now?

After leading its allies into the conflict in 2015, Saudi Arabia is now stuck in a military quagmire.

Years of bombings have failed to shake the rebels’ hold on the capital Sanaa, and they have steadily expanded their reach in the country’s north.

“With Saudi Arabia’s growing interest in an exit strategy, there is real opportunity for Biden to harness the momentum,” said Varsha Koduvayur, a research analyst at the Washington-based Foundation for Defence of Democracies.

But Riyadh fears that leaving Yemen could give a dangerous, anti-Saudi insurgency free rein, right on the kingdom’s southern border.

Biden has said the US will “help Saudi Arabia to defend its territory and its people” and vowed that support for counter-terrorism operations will continue.

Kodavayur said that would be critical in Yemen, where the resurgence of Al Qaeda in the Arabian Peninsula “remains a threat” — despite the reported arrest its leader Khalid Batarfi.