Foreign militaries an obstacle in Libya’s path to peace 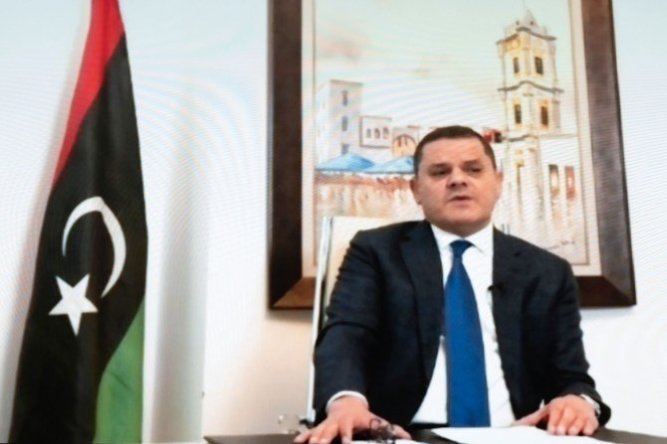 Short Url
https://arab.news/9hfv9
The political process in Libya is moving steadily, but the risks of uncertainty remain. The political negotiations under the UN’s auspices on the one hand and the military situation on the other do not follow the same paths.

A cease-fire was agreed in Geneva on Oct. 23. The agreement contained several requirements, the most important being the withdrawal of all foreign fighters and troops from Libya within three months.

As this deadline passed, both UN Secretary General Antonio Guterres and the US representative at the UN on Jan. 29 invited all foreign fighters and mercenaries to immediately leave Libya. Acting US Ambassador to the UN Richard Mills was more specific. He said: “We call on Russia, Turkey and the UAE to immediately initiate the withdrawal of their forces from the country and the removal of the foreign mercenaries and military proxies that they have recruited, financed, deployed, and supported in Libya.”

New US President Joe Biden has not yet announced the details of his Libya policy. However, we know that, when he was vice president in the Obama administration, he was opposed to the NATO-led military intervention in the country.

Russian mercenaries of the Wagner Group not only continue to stay in Libya but are also digging trenches between Sirte and Jufra, which means they may be planning to stay longer.

As for Turkey, the government has not yet made a statement on the possible withdrawal of its military personnel from Libya or on the plans for the fighters it supports. But a motion voted on last December in the Turkish parliament — when lawmakers decided to extend the armed forces’ stay in Libya for another 18 months — gives an idea about how it may act.

Ankara is likely to face pressure from both the US and the wider international community. The first pressure may come at the NATO summit that will be held “in early 2021.” Biden has a long list of controversial issues with Turkey. It is unclear for the moment when the withdrawal of the Turkish military from Libya may come on to the agenda.

Turkey would not wish to confront the Russian mercenaries in Libya; nor would it want to abandon the strong position it has gained on the ground, because the region it controls contains 80 percent of the country’s oil wells.

Turkey is likely to face pressure from both the US and the wider international community.

While the military situation has remained more or less stable on the ground, there was an important development in the political negotiations conducted in Geneva under the UN’s auspices on Friday.

Out of the 74 Libyan participants — one of the original 75 has passed away since the process began — picked by the UN to participate in the political talks, an 18-member Consultative Council was tasked with setting up a temporary executive body composed of one representative from each of the three major regions of Libya: Tripolitania, Cyrenaica, and Fezzan. On Monday last week, the group adopted a decision to form the executive body, which would organize elections to be held at the end of this year. Turkey rightly welcomed this move. Its Foreign Ministry issued a statement praising the progress achieved in the formation of the executive authority, but the statement fell short of giving a date for the withdrawal of its military presence from Libya.

On Friday, the election of the interim executive body was completed. A sophisticated mechanism was used to make the political reconciliation process as faultless as possible. There were four lists in the running. Candidates needed to receive a minimum of 60 percent of the valid votes to be successful in the first round. None of the lists reached this target. Therefore, a second round of elections was contested by the two lists that obtained the highest number of votes in the first round. The threshold for the second round was 50 percent plus one.

The rules laid down by the UN Support Mission in Libya also included a condition of not standing as a candidate in the December elections. This provision will give strong political figures the incentive to run for more permanent posts.

In the second round of voting — to the surprise of many analysts — the list that included strong candidates such as House of Representatives President Aguila Saleh and Government of National Accord Interior Minister Fathi Bashagha was defeated. The winning list included Mohammad Younes Menfi as president of the Presidency Council and Abdul Hamid Dbeibah as prime minister. The two other members of the Presidency Council are Mossa Al-Koni and Abdullah Hussein Al-Lafi.

The Turkish Foreign Ministry again welcomed this move, but also without any reference to a plan to withdraw its military presence from Libya.

The agreement reached in Geneva is very important, but as long as Turkey and Russia keep their military presence in Libya, the prospects for a satisfactory outcome to the political process remain uncertain.

Yasar Yakis is a former foreign minister of Turkey and founding member of the ruling AK Party. Twitter: @yakis_yasar