Zara the First: Young Scot on becoming first female to lead influential Muslim organisation and her debt to another inspirational woman close to home 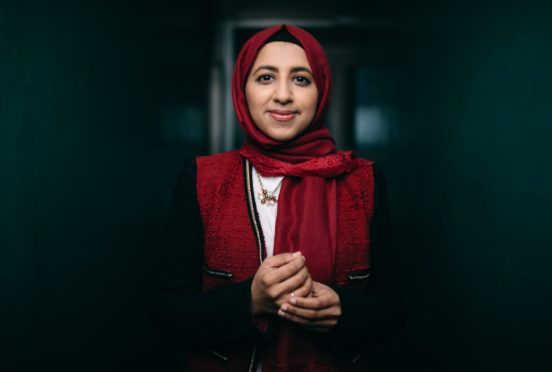 4/2/2021. Pics of Zara Mohammed, who has just been elected the leader of the British Muslim Council – the first female to do so. Location: Glasgow.

She hopes becoming the first woman to head the Muslim Council for Britain will inspire other young women but Zara Mohammed’s own inspiration was closer to home.

The 29-year-old Glaswegian is the first female secretary general of the umbrella organisation supporting 500 mosques, schools, community groups, professional organisations and charities across the UK. She is also the first Scot and the youngest person to lead the influential organisation.

While she is poised to become a role model for many young Muslim women – Zara was touched to learn she was the subject of a lesson on religion and female leaders in a London primary school class – she says her mum inspired her.

She said: “She is a very strong lady and was always caring for people, not just our family but our neighbours. She always said, ‘you’re the benchmark for your own success – don’t compare yourself to others’. Both my parents inspired me to trust my abilities and, if I think I can achieve something, to aim high and go for it.”

Zara expects her unique position as the youngest and first female leader of her organisation to come with added scrutiny. She is acutely aware of the challenges ahead but determined to meet them head on.

“This is a time when we need strong, collaborative leadership. I hope to do as much good as I can but I’m also aware that, as a woman in leadership, I’ll be heavily scrutinised. There will be challenges and curve balls but now is a time to be a little bit fearless.

“If I can make a little change and space for more young people and women from ­different backgrounds to ­follow me, it will be worth it.”

While she admits the ­attention over her appointment has been daunting, Zara is thrilled at the volume of supportive messages she has received from women.

She said: “My favourite part has been all the women messaging and seeing how encouraged and inspired they are. It makes it worth it when you’re giving people confidence to think, ‘yes why can’t a woman lead?’.”

Zara is the first woman to lead the council since it formed in 1997. Gaining the majority of affiliate votes against imam and broad- caster Amjal Masroor was an encouraging step for the new leader, especially as the majority were cast by men.

“I think that’s given me even more confidence because I was able to inspire that trust and support,” added Zara, who previously held the role of assistant secretary general within the council.

Determined to promote inclusivity and diversity during her two-year tenure, Zara also hopes to pave the way for more young Muslim men and women to join the council and embrace leadership roles.

“I don’t really fit your ­stereotype person in leadership,” she admitted. “But with this role being as historic as it is, it’s about what I can do to inspire others. I think this is an important message for young women, for all young people, to believe they are capable and talented enough to take on these roles. I’m going to bring as many women and young people on-board as I can.”

She added: “Globally, we’re seeing a surge of women in leadership and, within the Muslim community, there are many women doing the same in arts, law, politics and sport and we’ve seen a huge increase in women’s organisations. I think the change is there, and women are leading it.”

As she steers the council through unprecedented times, Zara’s first objective is to continue supporting and advising mosques on implementing health and safety strategies, and offering online access to key services and sermons during the pandemic.

The council has also worked to ensure key information on coronavirus and the vaccination process is available in multiple languages. Zara said, “Our ongoing priority is our Covid response, addressing the mental health and economic impact but, most importantly, working with the British Islamic Medical Association to challenge misinformation about the vaccine and make sure our communities get the right message.”

She believes the coronavirus pandemic has also exposed certain inequalities faced by the country’s black, Asian and minority ethnic communities. “The pandemic has highlighted ongoing inequalities,” added Zara. “There are Muslim and ethnic minority communities that live in some of the most deprived communities in the UK, with some of the highest deprivation, social-economic divide and barriers to health care. This is a huge piece of our work moving forward to consider how we can support our community.”

An ongoing mission of the Muslim Council for Britain is to tackle Islamophobia, a prevalent issue in the UK that Zara has experienced first hand, and other forms of prejudice.

“I wear the headscarf so I’m visibly a Muslim woman,” said Zara, who has a master’s degree in human rights law from Strathclyde University.

“Before the pandemic, when I would travel down to London on a busy train I was always anxious someone would say something. I’ve experienced that racism, thankfully nothing severe. Sometimes it’s subtle, other times obvious but, unfortunately, it is part of daily life.”

This extends to employment inequality and discrimination, she explains: “There is the verbal and physical abuse but also the institutional aspect. Many of my friends have been turned away from employment or unable to attain senior management roles because they didn’t look the part.

“This is a key body of work the council will continue, including an upcoming report on Islamophobia and its ­definition, focusing on education, improving reporting of hate crimes and sharing lived experiences to help ­people understand this is a real issue people face daily.”

For Zara, Islamophobia must be addressed on wider, collaborative scale across communities: “I believe we shouldn’t treat Islamophobia as a Muslim issue but as an issue for our society that we have to face together.

“In all communities, if we allow hatred and divisiveness to fester, we actually harm everyone because we create division amongst ourselves. Challenging this as a society is the most effective remedy.”