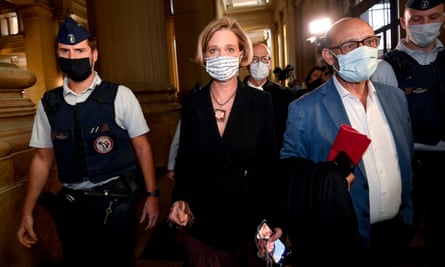 Delphine Boël leaving court in Brussels with her lawyer, Marc Uyttendaele. She is arguing to bear the surname of her legal father and the titles Her Royal Highness and Princess of Belgium. Photograph: Isopix/Rex/Shutterstock

A woman who successfully fought a seven-year legal battle to prove she was the daughter of the former king of Belgium, Albert II, will learn next month whether, against the wishes of her father, she will be able to use the titles Her Royal Highness and the Princess of Belgium.

Delphine Boël, 52, an artist and sculptor, whose mother had an extra-marital affair with Albert in the 1960s and 70s, argued in the Brussels court of appeal that she should also be able to use her biological father’s surname of Saxe-Coburg. The court will give its judgment on 29 October.

King Albert, 86, who abdicated from the Belgian throne in 2013, was forced to acknowledge he was Boël’s biological father after a court-ordered DNA test last January.

Boël, who had spent time with Albert as a child, nicknaming him Papillon (butterfly), had sought acknowledgement more than 20 years ago but her requests had been rejected. She launched a legal battle to prove paternity in June 2013, after the elder of her two children, Joséphine, was admitted to hospital with pneumonia, and she felt the absence of her biological father.