Bacillus Calmette–Guérin (BCG) vaccine is a vaccine primarily used against tuberculosis (TB).[1] In countries where tuberculosis or leprosy is common, one dose is recommended in healthy babies as close to the time of birth as possible.[1] In areas where tuberculosis is not common, only children at high risk are typically immunized, while suspected cases of tuberculosis are individually tested for and treated.[1] Adults who do not have tuberculosis and have not been previously immunized but are frequently exposed may be immunized as well.[1] BCG also has some effectiveness against Buruli ulcer infection and other nontuberculous mycobacteria infections.[1] Additionally it is sometimes used as part of the treatment of bladder cancer.[2][3]

Rates of protection against tuberculosis infection vary widely and protection lasts up to twenty years.[1] Among children it prevents about 20% from getting infected and among those who do get infected it protects half from developing disease.[4] The vaccine is given by injection into the skin.[1] Additional doses are not supported by evidence.[1]

Serious side effects are rare. Often there is redness, swelling, and mild pain at the site of injection.[1] A small ulcer may also form with some scarring after healing.[1] Side effects are more common and potentially more severe in those with poor immune function.[1] It is not safe for use during pregnancy.[1] The vaccine was originally developed from Mycobacterium bovis, which is commonly found in cows.[1] While it has been weakened, it is still live.[1]

The main use of BCG is for vaccination against tuberculosis. BCG vaccine can be administered after birth intradermally.[10] BCG vaccination can cause a false positive Mantoux test, although a very high-grade reading is usually due to active disease.

The most controversial aspect of BCG is the variable efficacy found in different clinical trials, which appears to depend on geography. Trials conducted in the UK have consistently shown a protective effect of 60 to 80%, but those conducted elsewhere have shown no protective effect, and efficacy appears to fall the closer one gets to the equator.[11][12]

A 1994 systematic review found that BCG reduces the risk of getting TB by about 50%.[11] There are differences in effectiveness, depending on region, due to factors such as genetic differences in the populations, changes in environment, exposure to other bacterial infections, and conditions in the lab where the vaccine is grown, including genetic differences between the strains being cultured and the choice of growth medium.[13][14]

A systematic review and meta analysis conducted in 2014 demonstrated that the BCG vaccine reduced infections by 19–27% and reduced progression to active TB by 71%.[15] The studies included in this review were limited to those that used interferon gamma release assay.

The duration of protection of BCG is not clearly known. In those studies showing a protective effect, the data are inconsistent. The MRC study showed protection waned to 59% after 15 years and to zero after 20 years; however, a study looking at Native Americans immunized in the 1930s found evidence of protection even 60 years after immunization, with only a slight waning in efficacy.[16]

BCG seems to have its greatest effect in preventing miliary TB or TB meningitis, so it is still extensively used even in countries where efficacy against pulmonary tuberculosis is negligible.[17]

BCG has protective effects against some non-tuberculosis mycobacteria.

BCG has been one of the most successful immunotherapies.[26] BCG vaccine has been the “standard of care for patients with bladder cancer (NMIBC)” since 1977.[26][27] By 2014 there were more than eight different considered biosimilar agents or strains used for the treatment of non–muscle-invasive bladder cancer (NMIBC).[26] [27] 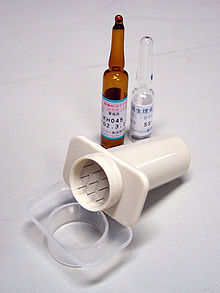 An apparatus (4–5 cm length, with 9 short needles) used for BCG vaccination in Japan, shown with ampules of BCG and saline

BCG is given as a single intradermal injection at the insertion of the deltoid. If BCG is accidentally given subcutaneously, then a local abscess may form (a “BCG-oma”) that can sometimes ulcerate, and may require treatment with antibiotics immediately, otherwise without treatment it could spread the infection causing severe damage to vital organs. An abscess is not always associated with incorrect administration, and it is one of the more common complications that can occur with the vaccination. Numerous medical studies on treatment of these abscesses with antibiotics have been done with varying results, but the consensus is once pus is aspirated and analysed, provided no unusual bacilli are present, the abscess will generally heal on its own in a matter of weeks.[30]

The characteristic raised scar that BCG immunization leaves is often used as proof of prior immunization. This scar must be distinguished from that of smallpox vaccination, which it may resemble.

BCG immunization generally causes some pain and scarring at the site of injection. The main adverse effects are keloids—large, raised scars. The insertion of deltoid is most frequently used because the local complication rate is smallest when that site is used. Nonetheless, the buttock is an alternative site of administration because it provides better cosmetic outcomes.

BCG vaccine should be given intradermally. If given subcutaneously, it may induce local infection and spread to the regional lymph nodes, causing either suppurative and nonsuppurative lymphadenitis. Conservative management is usually adequate for nonsuppurative lymphadenitis. If suppuration occurs, it may need needle aspiration. For nonresolving suppuration, surgical excision may be required. Evidence for the treatment of these complications is scarce.[31]

Uncommonly, breast and gluteal abscesses can occur due to haematogenous and lymphangiomatous spread. Regional bone infection (BCG osteomyelitis or osteitis) and disseminated BCG infection are rare complications of BCG vaccination, but potentially life-threatening. Systemic antituberculous therapy may be helpful in severe complications.[32]

If BCG is accidentally given to an immunocompromised patient (e.g., an infant with SCID), it can cause disseminated or life-threatening infection. The documented incidence of this happening is less than one per million immunizations given.[33] In 2007, The World Health Organization (WHO) stopped recommending BCG for infants with HIV, even if there is a high risk of exposure to TB,[34] because of the risk of disseminated BCG infection (which is approximately 400 per 100,000 in that higher risk context).[35][36]

The age of the person and the frequency with which BCG is given has always varied from country to country. The World Health Organization (WHO) currently recommends childhood BCG for all countries with a high incidence of TB and/or high leprosy burden.[1] This is a partial list of historic and current BCG practice around the globe. A complete atlas of past and present practice has been generated.[37]

BCG is prepared from a strain of the attenuated (virulence-reduced) live bovine tuberculosis bacillus, Mycobacterium bovis, that has lost its ability to cause disease in humans. Because the living bacilli evolve to make the best use of available nutrients, they become less well-adapted to human blood and can no longer induce disease when introduced into a human host. Still, they are similar enough to their wild ancestors to provide some degree of immunity against human tuberculosis. The BCG vaccine can be anywhere from 0 to 80% effective in preventing tuberculosis for a duration of 15 years; however, its protective effect appears to vary according to geography and the lab in which the vaccine strain was grown.[13]

A number of different companies make BCG, sometimes using different genetic strains of the bacterium. This may result in different product characteristics. OncoTICE, used for bladder instillation for bladder cancer, was developed by Organon Laboratories (since acquired by Schering-Plough, and in turn acquired by Merck & Co.). Pacis BCG, made from the Montréal (Institut Armand-Frappier) strain,[56] was first marketed by Urocor in about 2002. Urocor was since acquired by Dianon Systems. Evans Vaccines (a subsidiary of PowderJect Pharmaceuticals). Statens Serum Institut in Denmark markets BCG vaccine prepared using Danish strain 1331.[57] Japan BCG Laboratory markets its vaccine, based on the Tokyo 172 substrain of Pasteur BCG, in 50 countries worldwide.

According to a UNICEF report published in December 2015 on BCG vaccine supply security, global demand increased in 2015 from 123 to 152.2 million doses. In order to improve security and to [diversify] sources of affordable and flexible supply,” UNICEF awarded seven new manufacturers contracts to produce BCG. Along with supply availability from existing manufacturers, and a “new WHO prequalified vaccine” the total supply will be “sufficient to meet both suppressed 2015 demand carried over to 2016, as well as total forecast demand through 2016-2018.”[58]

In the fall of 2011, the Sanofi Pasteur plant flooded causing problems with mold.[59] The facility, located in Toronto, Ontario, Canada, produced BCG vaccine products, made with substrain Connaught, such as a tuberculosis vaccine ImmuCYST, a BCG Immunotherapeutic – a bladder cancer drug.[60] By April 2012 the FDA had found dozens of documented problems with sterility at the plant including mold, nesting birds and rusted electrical conduits.[59] The resulting closure of the plant for over two years caused shortages of bladder cancer and tuberculosis vaccines.[61][62] On October 29, 2014 Health Canada gave the permission for Sanofi to resume production of BCG.[63] An 2018 analysis of the global supply concluded that the supplies are adequate to meet forecast BCG vaccine demand, but that risks of shortages remain, mainly due to dependence of 75 percent of WHO pre-qualified supply on just two suppliers.[64] 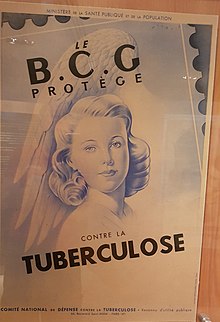 Albert Calmette, a French physician and bacteriologist, and his assistant and later colleague, Camille Guérin, a veterinarian, were working at the Institut Pasteur de Lille (Lille, France) in 1908. Their work included subculturing virulent strains of the tuberculosis bacillus and testing different culture media. They noted a glycerin-bile-potato mixture grew bacilli that seemed less virulent, and changed the course of their research to see if repeated subculturing would produce a strain that was attenuated enough to be considered for use as a vaccine. The BCG strain was isolated after subculturing 239 times during 13 years from virulent strain on glycerine potato medium. The research continued throughout World War I until 1919, when the now avirulent bacilli were unable to cause tuberculosis disease in research animals. Calmette and Guerin transferred to the Paris Pasteur Institute in 1919. The BCG vaccine was first used in humans in 1921.[65]

Public acceptance was slow, and one disaster, in particular, did much to harm public acceptance of the vaccine. In the summer of 1930 in Lübeck, 240 infants were vaccinated in the first 10 days of life; almost all developed tuberculosis and 72 infants died. It was subsequently discovered that the BCG administered there had been contaminated with a virulent strain that was being stored in the same incubator, which led to legal action against the manufacturers of the vaccine.[66]

Dr. R.G. Ferguson, working at the Fort Qu’Appelle Sanatorium in Saskatchewan, was among the pioneers in developing the practice of vaccination against tuberculosis. In 1928, BCG was adopted by the Health Committee of the League of Nations (predecessor to the World Health Organization (WHO)). Because of opposition, however, it only became widely used after World War II. From 1945 to 1948, relief organizations (International Tuberculosis Campaign or Joint Enterprises) vaccinated over 8 million babies in eastern Europe and prevented the predicted typical increase of TB after a major war.

BCG is very efficacious against tuberculous meningitis in the pediatric age group, but its efficacy against pulmonary tuberculosis appears to be variable. As of 2006, only a few countries do not use BCG for routine vaccination. Two countries that have never used it routinely are the United States and the Netherlands (in both countries, it is felt that having a reliable Mantoux test and therefore being able to accurately detect active disease is more beneficial to society than vaccinating against a condition that is now relatively rare there).[67][68]

Tentative evidence exists for a beneficial non-specific effect of BCG vaccination on overall mortality in low income countries, or for its reducing other health problems including sepsis and respiratory infections when given early,[69] with greater benefit the earlier it is used.[70]

In rhesus macaques, BCG shows improved rates of protection when given intravenously.[71][72]

BCG vaccine is also in Phase 3 trials (as of March 2020) of being studied to prevent COVID-19 in health care workers in Australia and Netherlands.[75] Neither country practices routine BCG vaccination.