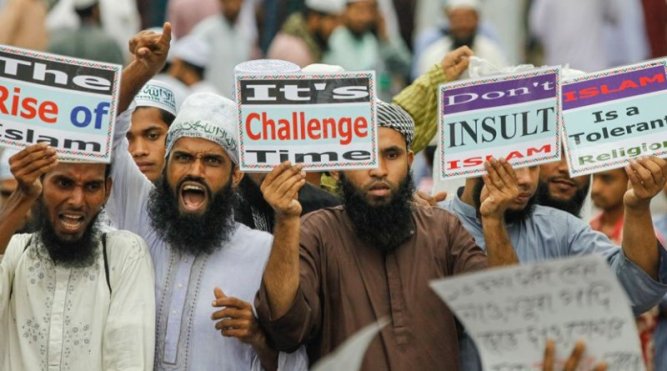 THE fears for attacks that the Ahmadiyyas in Brahmanbaria expressed, alleging that they continue to be threatened by groups of religious bigots, suggest that the administration has not adequately lifted a finger to ensure their security. Members of the Ahmadiyya Muslim Jamaat in Brahmanbaria on Wednesday expressed their concern after a mosque of theirs, Masjid Baitul Wahed, at Kandipara in the district town, a microbus parked inside the mosque premises and some houses of the Ahmadiyyas bordering the mosque had been vandalised reportedly by students of the Jamia Islamia Yunusia Madrassah, as the police said the next day. The incident took place riding on rumours that the Ahmadiyyas had earlier beaten students of the madrassah. The groups supporting the madrassah students are also reported to have put out a call for others to attend Friday’s congregational prayers in the Ahmadiyya mosque although the madrassah students later denied having put out any such call. The madrassah students, who brought out a procession immediately after Tuesday’s attack and held a rally at the district press club, are also reported to have demanded the passage of a law declaring the Ahmadiyyas non-Muslims.

Although nothing happened, fortunately, to the Ahmadiyya mosque at the time of congregational prayers this Friday, this does not guarantee against any such incidents in future. Because attacks on minorities, religious and ethnic, are not that frequent but are not rare too, when one such incident should be considered too many. In an incident in the middle of February 2019, some groups of religious bigots carried out attacks on the Ahmadiyyas at their Ahmadnagar neighbourhood in Panchagarh. Several hundred people at night marched down more than a kilometre from the central mosque of the district, broke through a police picket on the way and vandalised and burnt several dozen houses of the Ahmadiyya community. Many of the women of the community are also reported to have been dragged out of their houses and physically assaulted. The police were blamed for their failure to protect the community and a case was filed but any progress in the investigation soon stopped coming to be heard. In the case of Brahmanbaria, the Ahmadiyya Muslim Jamaat in a release on Thursday also said that some groups had occupied four of their mosques in the district in 1987 and none of the mosque has ever been returned to them. In such a situation, the Ahmadiyyas fear that the latest move could be directed towards the occupation of another of their mosques.

While the government must, under the circumstances, arrange for the safeguard of the Ahmadiyyas at hand and afford them protection, especially in view of their fears still persisting, it must look into the investigation of the attacks on the Ahmadiyyas in Panchanger that took place early 2019. The government must also stop any hate campaigns against minorities, religious and ethnic, so that such communities do not fall prey to majoritarianism of any sort.