The tragedies are too numerous to list, and their enormity is even more alarming in hindsight. 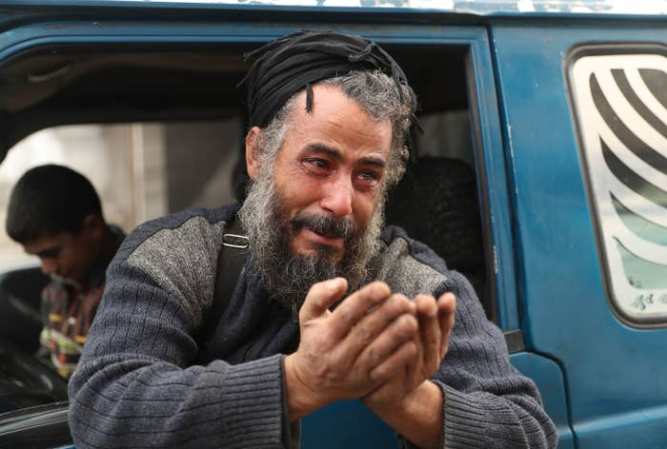 Abu Ahmad, one of the last people to flee from Maaret al-Numan in Syria’s Idlib province, leaving with his family for a camp for the displaced, Dec. 24.

As the US prepared to invade Iraq in the winter of 2003, my father and I were in Mecca, taking part in the annual hajj pilgrimage. We surged with a great mass of humanity in the millions to pray atop Arafat, the mountain of mercy. We slept under the open sky on the pebbles strewn throughout Muzdalifa, a plain near the holy city. Before the hajj we had taken evening strolls in Medina, the Prophet Muhammad’s city, often walking by Shia worshippers chanting mournful hymns by the resting places of his family and companions in the Baqi’ graveyard.

I was 17 at the time, and I am still bewildered at how quickly it all unraveled, how thoroughly that momentary sense of unity and fraternity was destroyed in my mind in the immolation that followed. Throughout the Arab world, and in the Muslim world beyond it, the 21st century — and particularly its second decade — will be remembered for the litany of catastrophes that devastated entire nations and struck at the very idea of the moral arc of the universe.

It is too easy to elucidate these tragedies. They are too numerous, their enormity only more alarming in hindsight. The Muslim caliphate, an idle dream colored by myths of former glory, was resurrected in a brutal and fevered nightmare of atrocities piled upon crimes against humanity. The emergence of ISIS and the horrors it wrought will likely spell the end of ideologically driven political Islamist movements in the Middle East, much like the crushing defeats of the 1967 war undermined pan-Arab nationalism.

A nine-year civil war in Syria with half a million dead undermined every international norm in warfare, from the targeted bombing of hospitals to the use of chemical weapons. It fueled the largest mass migration since World War II, and the rising tide of right-wing populism across the globe, whose uniting force is anti-Muslim hatred. The governments of the world’s two most populous countries launched sweeping projects to question the legitimacy of hundreds of millions of Muslim citizens and break their spirits. Revolutions gave way to crushing tyranny throughout the Middle East, the tyrants themselves turning against each other in a cold war that destroyed the idea of any kind of shared destiny. New forms of injustice are invented every day.

But the broader, collective tragedy was the cruelty and enmity among supposed brethren. There is an exuberance in inflicting torment and suffering that goes beyond the traditional and practical zero-sum politics of exclusion in the Middle East, whether it is the Orwellian joy of launching military operations with monikers like “Operation Olive Branch” and “Restoring Hope,” the enthusiastic and vindictive mass murder or incarceration of political opponents in countries like Egypt and Turkey, the brazenness of chopping up a journalist inside a consulate, or the vulgarity of a political discourse in which every day is a witch hunt.

One hadith or recorded saying by the Prophet Muhammad goes: “The parable of the faithful in their affection, mercy, and compassion for each other is that of a [single] body. When any limb aches, the whole body reacts with insomnia and fever.” It could not be less true today. As an Egyptian saying goes, “those who had modesty are dead.”

But as I write this, my son is 7 months old and two things give me hope for the world he was born into. First, while western powers and foreign influences played an important role in setting the stage for conflict, the worst excesses of our tyrants, be they presidents and kings or preachers and evangelists, are products of our own societies. The invasion of Iraq created an environment where ISIS could flourish, but its chieftains and ideologues are very much our own. So there is hope for change from within. And secondly, an experiment has begun that could declaw some of these tyrants.

A few months ago Ayed al-Qarni, a prominent Saudi cleric with a huge following in the Arab world, apologized in a television interview for espousing a harsh and austere brand of Islam. “I apologize to Saudi society for the mistakes, [for the] harshness that contradicted scripture and the forgiving nature of Islam, that moderate, centrist religion that is a mercy to all mankind,” he said.

Al-Qarni claimed his apology was a result of his personal growth and development. But he also acknowledged the real source of his rebirth by praising Saudi Arabia’s powerful Crown Prince Mohammad bin Salman. Among other things, the crown prince is responsible for Saudi Arabia’s disastrous war in Yemen and the humanitarian crisis it created, an unprecedented crackdown on Saudi activists and moderate religious clerics, and, according to the CIA the murder of journalist Jamal Khashoggi. He also initiated a series of dramatic social and religious reforms in the kingdom, from opening entertainment venues to ending gender segregation in restaurants, eliminating many of the guardianship rules that denied agency to Saudi women, and trimming back the power of the clergy to police society and public behavior.

To outsiders, many of these reforms may seem archaic, shallow and symbolic, an anachronism in our era. But anyone who grew up under the influence of the harsh and austere religiosity exported throughout the Muslim world by the Saudi state via its clerics and oil wealth knows just how significant this change in direction could prove to be.

Al-Qarni and his ilk have a lot to apologize for. The roots of violent jihadism are too complex to be laid solely at their feet, although they certainly deserve their share of the blame. But for many Muslims, their legacy is both deeper and harder to define: the absence of joy and a harshness that permeated one’s vision of religion in total opposition to the mercy they have now belatedly discovered. It is a legacy seen in the absence of mothers, daughters, and sisters in family photographs, their covered faces retreating into the background in malls and markets. It’s the judgment in the eyes that look upon a woman whose hair cascades down her back for all to see or a man listening to music in his car, the harsh cut in the film reel where the kiss was supposed to be.

The desire to resurrect a past of fundamental purity may have reached its most violent and deranged form in places around the globe where this Saudi influence was strongest, but it’s not unique to the Muslim world. Across the West, right-wing xenophobes preach anti-immigrant nationalism centered on reclaiming a mythical original social purity. Salafism is a similar reaction to an increasingly complex, depressing modern reality filled with defeat, oppression, lack of agency and disruptive, imported social trends. It harkens to a simpler, mythological time, one in which heroism is possible and dignity is a straightforward choice, where the right thing to do is as clear as a white thread against the night sky.

The problem, of course, is that like every imagined utopia, this one wasn’t real and never will be. Only 20 years after the Prophet Muhammad’s death, a rebellion toppled the caliph, who was the prophet’s son-in-law, and rival claims to leadership led to fratricide and civil war whose legacy endures almost 1,500 years later. Its participants, then and now, accuse one another of treason, apostasy, and treachery over their competing visions of society.

Saudi Arabia has begun to loosen the tyrannical hold over society enjoyed by the clerics who imposed what they considered a true Islam. But to truly atone for its evangelical embrace of puritanism and its propagation throughout the Muslim world, it must champion reform and dialogue across the diverse mosaic of tradition, mysticism, and sect that encompass the global Islamic experience. It must give way to voices of moderation and inclusion that can take the lead in reforming religious education.

A new era for the Muslim world would deemphasize the purist obsession with minutiae and rituals, and emphasize the overarching moral codes of egalitarianism and compassion that are at the core of Islamic teaching. It would embrace the critical thinking that was key to the Islamic Golden Age, which kept the flame of progress alive in the Medieval era.
Saudi Arabia may never atone for the murder of Jamal Khashoggi, the devastation it wrought in Yemen, its torture of women’s rights activists or its destabilization of the Arab world. But whether we like it or not, the country holds the keys to a peaceful reformation that could have far reaching impact on generations of young Muslims.

My son will grow up in a multifaith household where we will celebrate Christmas and Eid, paint Easter eggs and eat sugar-dusted pistachio pastries during the Feast of Sacrifice. In an era of great uncertainty and monumental change, I will teach him to never be bewildered by the multiplicity of paths to the Divine. We must take comfort in the fact that it’s impossible to get lost along the way.

Kareem Shaheen is a journalist and columnist based in Montreal and a former Middle East correspondent for the Guardian.