Building a Bridge Between China and Her Muslim Minority: Taoism as Understood by a Muslim Scholar 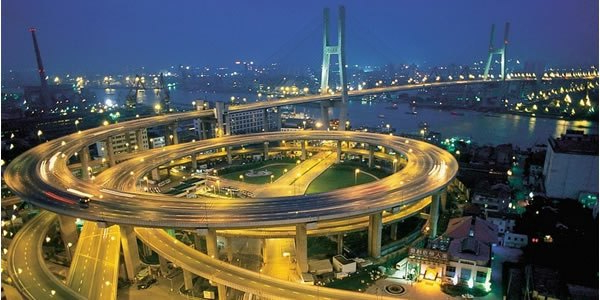 Nanpu Bridge, Shanghai.  Suggested reading: China to rewrite the Quran and the Bible to fit ‘socialist values’ and A Chinese Emperor’s poem about Prophet Muhammad

Source: Taoism, A Chapter of a book, Revelation, Rationality, Knowledge and Truth

ALL CHINESE RELIGIONS are derived from the same ancient source of spiritual and religious experiences of the great Chinese sage prophet Fu Hsi. In the subsequent ages, many a great sage and thinker pondered over the works of Fu Hsi and studied them in-depth. Based on their study they presented to the Chinese people new philosophies, sciences, religions and moral teachings. Among them are King Wan, his son Cheu Kung and Lao-tzu, all held in great esteem by the Chinese people of all ages. The way of life presented by Lao-tzu (6th century BC), a contemporary of Confucius, is known as Taoism.

In Taoism, eternal truth is embodied in a being known as Tao whose attributes are spiritual and holy rather than material. Tao can be aptly defined as a personification of eternal virtues. They are precisely the same attributes as ascribed to God in Islam and other Divinely revealed religions. Taoism teaches man to completely submit to Truth (Tao), and to strive to modulate Tao. Tao is the model, and Taoism is the way to gain nearness to this model.

The same is the treatment in the Holy Quran regarding the relationship between God and man:

The hues of God! And who is more beautiful in hues than God?—and Him alone do we worship. 1

In Islam God is described and introduced through His attributes and the goal set for Muslims is to emulate them to modulate their lives. The description of Tao, presented by Lao-tzu, is quite similar to the attributes of God mentioned in the Quran. He writes:

‘The great Tao is vast. He is on the left and He is on the right. All creatures depend upon Him, and the care of them tires Him not. He brings creation to completion, without seeking reward. He provides for all His creation, but requires nothing for Himself, so He may be considered small. All creatures turn to Him for their needs, yet He keeps nothing for Himself, thus He may be named ‘the Supreme’. He does not consider Himself great and because of this He is truly Great.’ 2

Again we have another description:

‘Looked for but not visible, such a Being may be colourless. Listened for but not heard, such a Being may be called Silent. Grasped for but not caught, such may be called Concealed. No one can comprehend the ultimate source of these three qualities, but they are found in one Being. Though not luminous yet below Him there is no darkness. Being infinite He cannot be described. All His shapes keep returning to nothingness, thus we can say He is Shapeless; His image is without form. He is beyond comprehension (being the rarest of things). Try to reach His beginning, no beginning can be seen. Seek His end, no end can be perceived. Therefore, follow the ancient ways and improve your present.’ 3

Also, in another verse the description of Tao runs as follows:

‘He is indivisible and His true nature cannot be grasped. All creation originates from Him. He existed before heaven and earth were created. He is One and alone without form or sound. He exists independently without any support. Nothing changes in Him. He is in constant motion, but never tires. He can be called the Begetter of the universe.’4

The description of Tao given in the above passages is also found in different verses of the Quran, which when read together, reproduce everything covered by the above quotes. The image of God thus described in the Holy Quran, is summed up by the founder of the Ahmadiyya Muslim Community, the late Hazrat Mirza Ghulam Ahmadas of Qadian (India), in the following words:

It is pertinent to note that Chinese philosophy had its roots in religion, but with the passage of time its religious origin was obscured. Its followers adhered to the philosophy itself but thought it unnecessary to have any direct link with the source which had nourished it in the past. Consequently, the image of God was gradually impersonalised and the followers of Tao ceased to cultivate a personal relationship with Him as a Supreme Conscious Living Being.

N SHORT, like Confucianism, Taoism too at its source believed undoubtedly in a living, personal God to be the Eternal Truth. In the original works of Taoism or Confucianism, it was not considered sufficient just to gain an intellectual understanding of Tao, but the entire goal of life was set to mould one’s character and actions according to the concept of Tao.

However, in the source material of Taoism, as quoted above, the belief in Tao as an eternal intelligent creator has over the ages been obscured. But the idea of revelation itself is still retained, though only under the guise of inspiration. A conspicuous shift from Divine revelation to inspiration without a Divine origin, marks the trend among the spiritual thinkers of the later ages until no trace of Divinity is left in their writings. Inspiration to them became purely an internal phenomenon, which through deep contemplation and meditation could lead to the fountainhead of truth within oneself.

To delve deep into one’s nature can of course lead to the discovery of inner truth, but the Tao experience of inspiration as quoted in the authentic Taoist works is not entirely internal. With them inspiration has its own limitations—it cannot lead to objective truth which lies beyond the reach of the person who undergoes an inspirational experience.

The very foundation of Taoism is based on the great vision of Fu Hsi. The definition of inspiration however extended, can in no way be applied to that vision. When interpreted, it comprises such fountainheads of knowledge as were to give birth to many highly evolved and complex Chinese philosophies and sciences much later in time.

This is sufficient to illustrate the case in point. Inspirations cannot give birth to prophecies; no way can they lead to such future events as stand witness to the existence of an All-Knowing Supreme God by their realizations.