The Muslim Times is promoting secularism in every country of the world.  We also have the best collection about the Quran and the Bible.  Suggested reading: Building a Bridge Between China and Her Muslim Minority: Confucianism as Understood by a Muslim Scholar

China plans to rewrite all translated “classic religious books” to reflect the socialist values of the Communist Party of China. The order was given during a meeting in November that was organized by the Committee for Ethnic Affairs, which is responsible for all religious matters of the country.

While not directly referring to the Quran and the Bible, the committee plans a comprehensive review of the religious texts, which allegedly “do not conform to the progress of the times” and need to be fitted to the “era of President Xi Jinping.”

The reviewed editions of the text – sutras from Buddhism included – should not be against the principles of the Communist Party and will either be changed or re-translated by state-appointed censors.

In the meeting, a group of experts and representatives gathered to be told that they would need to follow President Xi’s order to interpret their beliefs in accordance with “the core values of Socialism,” Xinhua News Agency reported.

This move comes amid the crackdown on the Muslim Uighur’s that are held in so-called re-education centers. Up to 1 million people have been incarcerated in these centers, according to U.S. officials and U.N. experts. Beijing initially denied the existence of the camps in Xinjiang, but now says they are “vocational training centers” necessary to combat terrorism. 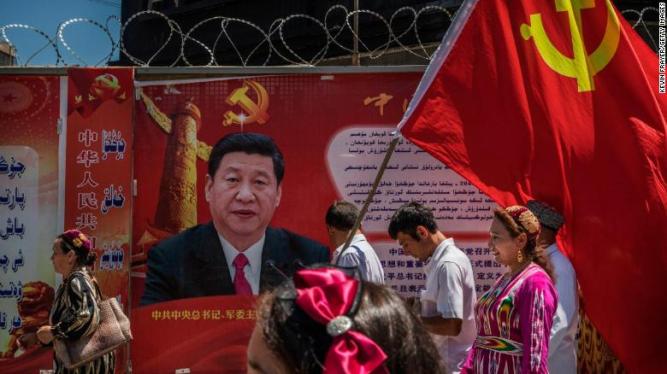 KASHGAR, CHINA – JUNE 30: Ethnic Uyghur members of the Communist Party of China carry a flag past a billboard of Chinese President Xi Jinping as they take part in an organized tour on June 30, 2017 in the old town of Kashgar, in the far western Xinjiang province, China. Kashgar has long been considered the cultural heart of Xinjiang for the province’s nearly 10 million Muslim Uyghurs. At an historic crossroads linking China to Asia, the Middle East, and Europe, the city has changed under Chinese rule with government development, unofficial Han Chinese settlement to the western province, and restrictions imposed by the Communist Party. Beijing says it regards Kashgar’s development as an improvement to the local economy, but many Uyghurs consider it a threat that is eroding their language, traditions, and cultural identity. The friction has fueled a separatist movement that has sometimes turned violent, triggering a crackdown on what China’s government considers ‘terrorist acts’ by religious extremists. Tension has increased with stepped up security in the city and the enforcement of measures including restrictions at mosques. (Photo by Kevin Frayer/Getty Images)

Building a Bridge Between China and Her Muslim Minority: Confucianism as Understood by a Muslim Scholar