Science and religion: A bittersweet relationship 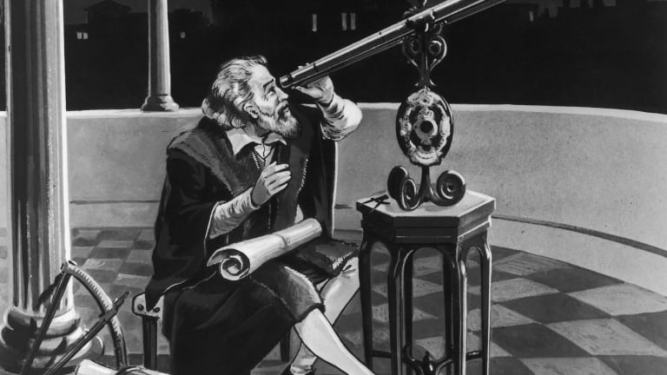 Galileo Gallelie: “Mathematics is the language with which God has written the universe.”  The Muslim Times has the best collection on religion and science

Earlier this week, in Paris, Hazrat Khalifatul Masih V most eloquently panned out before UNESCO how Muslim scientists, scholars and philosophers shaped the world of science. In his discourse, Hazrat Amirul Momineen made it clear that the “Holy Quran and the teachings of the Holy Prophet of Islam inspired the works of generations of Muslim intellectuals, philosophers and inventors in the Middle Ages”.

It is important to note, Muslim intellectuals possessed personal academic and intellectual goals that were promoted and endorsed by their religion to pursue the sciences. It is crucial to acknowledge that the scientific world in the west, particularly in France, did not experience such an easy ride when science came face to face with religion.

The Middle Ages in Europe witnessed a painful struggle between science and the church. With the dawn of the Renaissance, the world of scientific thought would experience hurdles placed by religious clerics declaring scientists as “heretics”.

Scientists and thinkers like Galileo Galilei and Baruch de Espinoza (better known as Spinoza), would be trialled for their ideas that challenged the Church. Regarding Galileo, Hazrat Khalifatul Masih IV wrote:

“One famous example is that of the tussle between the Church and Galileo. When Galileo (1564–1642) published his findings about the solar system, it infuriated the Church because his findings were against the perception which the Church had of the solar system. Under extreme duress he was forced to publicly renounce his scientific discoveries. Alternatively, he would have suffered death by torture…” (Christianity: A Journey From Facts to Fiction, p. 24)

Galileo was so relentless with his push for science that even 16 years after being warned by the Church, he published his Dialogue on the Two Chief World Systems, confidently discussing Copernicus’ refutation of the geocentric theory. Threatened with torture, he ended up declaring, “I do not hold this opinion of Copernicus” (Camus on Galileo The Myth of Sisyphus)

Aside: Suggested reading and viewing

The infamous Inquisitions of Europe originated for those who were suspected of publishing, spreading or talking about scientific idea that undermined the Church’s authority. However, the cocoon of supressing science would only breed a growing minority of free-thinkers, scientists, philosophers and for that matter, atheists.

Supressing science and free thought across Europe gave birth to the secret salons of Paris where thinkers, the likes of Baron d’Holbach, David Hume, Louis-Philippe Segur, Denis Diderot and Jean Meslier would discuss science, and philosophers like Voltaire who “appealed to our intelligence” and “Rousseau [who] touched our hearts”, as Louis-Philippe Segur put it. (The Twlight of Atheism, p. 36).

Scientific books and research began to be strictly controlled particularly in France, and anything that opposed religion would be violently shunned. This suppression simmered the heat of the violent French Revolution and led France to a full-fledged “secular” outlook.

The Reign of Terror (La Terreur) followed the French Revolution, led by radical individuals like Jacobin, Jacques Hebert and Maximillian Robespierre, where it was religion’s turn to be violently opposed. Many executions took place in France, using Dr Guillotine’s new slaughtering machine; based on the principles of gravity by Newton. Religious attire was also banned in some places and churches were shut down – the tables had been turned. Churches were being turned into “temples of reason” and the words “liberty” and “reason’’ would now openly be echoed.

On 10 November 1793, a festival took place in Notre-Dame Cathedral known as the “Festival of Reason”; the most famous Church in France had now been renamed as the “Temple of Reason”. During the festival, a “Goddess of Reason” who was to be worshipped appeared before the crowd and all sorts of rituals took place, with reason being the new “god”.

Prior to this, festivals would almost always be religious in nature, but now it was the new “Cult of Reason” government which was holding festivals in awe of liberty, nature and fraternity.

The suppression of science had turned reactionary in leading European society to strongly oppose religion and towards the spiritual darkness that we witness today in the form of the age of atheism.

The ideals of the French Revolution spurred across Europe, including Britain. Percy Shelley’s The Necessity of Atheism and Queen Mab are prime examples of France’s intellectual influence upon Britain.

Though many factors had played a role, the suppression of science and research was instrumental in leading to this extreme. It paved way for a largely anti-religion society. The force of intellectuals would now fiercely oppose religion and theories against it began to develop at an unprecedented rate, for example, Karl Marx’s notion about religion being “the opium of the people”.

This was a struggle that the Muslim scientists and philosophers did not have to undergo, for the most part. However, as the Enlightenment reached its peak and reason and science were given undue importance in that the existence of God was rejected, Allah sent the Promised Messiah, peace be upon him.

Interestingly, at the advent of the Promised Messiah (as), Muslim clerics had begun to oppose technological advances and issued fatwas (edicts) against technology developed by the West. It was the Promised Messiah who corrected the ways of such clerics and revived the original teachings of Islam, promoting research and science.

At the same time, the Promised Messiah pushed back at those who had taken hold of the other extreme of pure reason and science.

The effects of Western philosophers were beginning to catch fire in the east, with scores of Muslim and Hindu youth turning away from religion and focusing their sole attention on subjects like logic and philosophy. Islam had also lost its pomp and spiritual light, thus falling prey to doubt and scepticism.

The Promised Messiah (as) in his Arabic book Lujatu-Nur alludes to a populace of India who had begun to laugh, ridicule and mock those who adhered to religion, while priding themselves with their own intellectual understanding and ability in philosophy, nature and logic. The Promised Messiahas described the intensity of the situation by saying, “They have entered the stomachs of philosophers like the deceased enter graves”. (Lujatu-Nur, Ruhani Khazain Vol.16 p.48 )

The Promised Messiah challenged atheists on two fronts. Firstly, he presented intellectual arguments supplemented with a more robust proof of a living God through revelation. The intellectual arguments the Promised Messiah detailed against the philosophers were unique and novel and proved to be a breath of fresh air, a ray of hope and a source of solace and conviction for believing people.

Regarding the field of academia and tackling the various ideologies of the world at the time, the Promised Messiah said, “I have thus been moved by God to enter this battlefield of science and academic advancement armed with a literary arsenal, and also to exhibit the spiritual valour of Islam and demonstrate the marvel of its inner strength…” (Malfuzat, Vol. 1, p. 58).

The world of Islam and the West had taken up two extremes at the advent of the Promised Messiah. Muslims generally no longer supported research, science and the thought-process that the Quran had imparted, and previous Muslim intellectuals of the Golden Age had adopted. And the West had left religion altogether, giving science and philosophy an almost divine authority.

Both of these extreme fronts were successfully challenged by the Promised Messiah through his literature and a new dawn of Islam was shown to the world.

After the demise of the Promised Messiah, his successors have successfully upheld the great mission. While religious education lies at the core of human life, Khilafat-e-Ahmadiyya has encouraged secular learning to keep at par with the modern world. We see Hazrat Khalifatul Masih awarding gold medals to those that have excelled in education during the year. Financial grants are available to students who wish to pursue higher education in science, technology and humanities. Knowledge is, for the Ahmadiyya Jamaat, a lost asset that must be attained at any cost.