In just a few years, the dreams of European immigration hardliners have become reality on the Mediterranean. Volunteer sea rescue operations have been shut down, and the route across the sea is more dangerous than ever.

It was just before midnight when Fabian Heinz lost his faith in Europe. The Alan Kurdi, a ship belonging to Sea Eye, a German sea-rescue organization, was bobbing up and down between Lampedusa, in Italy, and Malta. Heinz, a 29-year-old photographer from Würzburg, remembers holding watch on deck that evening.

He looked up from his post to the dozens of refugees that he and other rescuers had saved from the sea near the Libyan coast. They were sleeping as well as they could, lying crisscrossed on the overfilled deck, wet from the spray of the waves. The Alan Kurdi had been sailing on the Mediterranean for two days at this point, but no country wanted to let the ship dock. Malta had forbidden the crew from making land. Italy’s Interior Minister Matteo Salvini had suggested the boat go to Hamburg. Supplies on board were running low, and there could soon be medical emergencies.

“I was prepared for all of that,” says Heinz. But in that moment, he felt incredibly lonely. “I had the feeling that nobody cared whether we just drifted out here. This kind of thing shouldn’t be happening here in Europe.” When Malta’s coast guard ultimately brought the migrants on board days later, two women had already collapsed. Even without refugees, the crew of the Alan Kurdi wasn’t allowed on land. The helpers had to head south. Thirteen days after saving 64 people, they were allowed to disembark — in Tunis.

For refugees, Europe is increasingly becoming a fortress without a gate. Even volunteer maritime rescuers are now being criminalized. Ports are closed to them. Ships are confiscated. Helpers are put on trial. Lifeline captain Claus-Peter Reisch was just sentenced to pay 10,000 euros by a Maltese court because his ship hadn’t been properly registered. The Italian Public Prosecutor’s Office is accusing 10 volunteers from the vessel Iuventa of illegal immigration. The crew could face up to 20 years in prison. 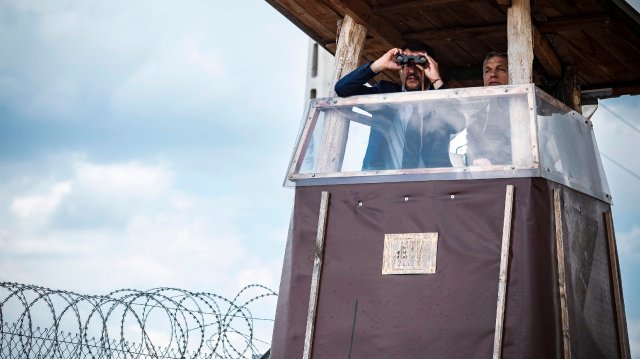 This handout picture released by Hungarian Prime Minister’s press office shows Italian Deputy Premier and Interior Minister Matteo Salvini (L) using binoculars next to Hungarian Prime Minister Viktor Orban from a watch tower on May 2, 2019 along the border fence on the Hungarian-Serbian border near the village of Roszke. (Photo by BALAZS SZECSODI / HUNGARIAN PRIME MINISTER’S OFFICE / AFP) / RESTRICTED TO EDITORIAL USE – MANDATORY CREDIT “AFP PHOTO / SOURCE / BYLINE” – NO MARKETING – NO ADVERTISING CAMPAIGNS – DISTRIBUTED AS A SERVICE TO CLIENTS