Why Pope Francis may open the door to married priests 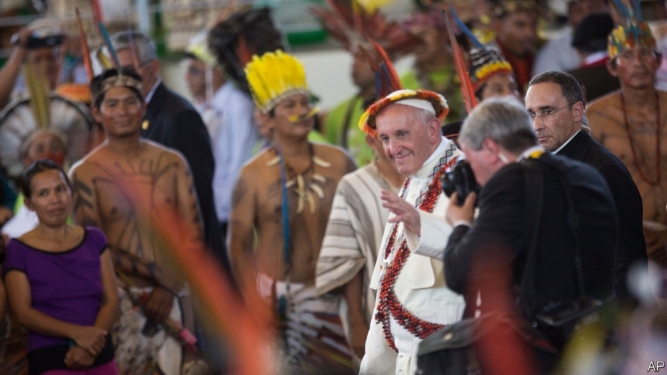 NOT FOR the first time, Pope Francis—or, to be more precise, his aides in the Vatican—have raised eyebrows. On June 17th, in a document that sets the agenda for a meeting in October to discuss the problems of the Amazon basin, they declared that the Catholic church should consider ordaining married men. The problems of Amazon communities range from the destruction of the natural environment to the persecution of its indigenous peoples. For the Catholic church, however, there is another pressing issue—it does not have anywhere near enough priests to minister to the existing Catholic population, let alone proselytise or fend off a growing challenge from Evangelical Christianity. Some Catholic figures talk of confronting a “Eucharist famine”.

The document asks the bishops who will attend the gathering, or synod, to discuss making priests of “elders, preferably indigenous, respected and accepted by their community, even if they have a constituted and stable family”. It also moots the idea of women taking part in what it calls “official ministry,” but quite what that could mean is unclear. The bishops would not be able to authorise the change, but they could recommend it to Francis who does have the power to enact it.