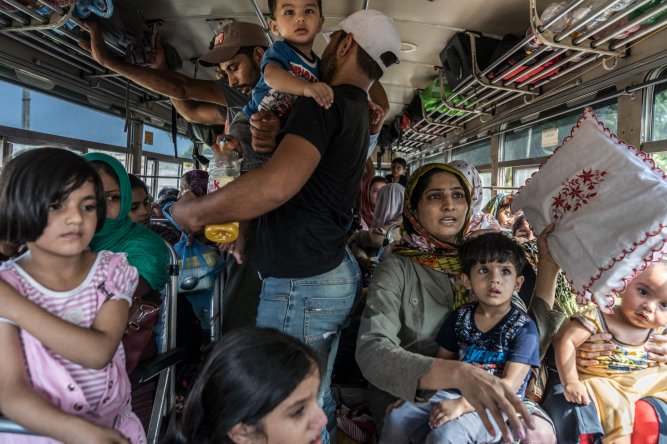 Muslims from Negombo, Sri Lanka, being relocated to another town. Suggested reading: The Muslim Times’ Collection on Islam’s Condemnation of Terrorism

By Jeffrey Gettleman and Dharisha Bastians

NEGOMBO, Sri Lanka — Auranzeb Zabi was cooking rice at a friend’s house on Wednesday when he heard angry shouting outside, looked out the window and saw a mob of Sri Lankan men carrying iron bars.

A day after the Islamic State claimed responsibility for suicide bombings that killed more than 350 people, Muslims in some areas of Sri Lanka were facing a rising backlash.

The mob surrounded the house. Mr. Zabi, a Pakistani refugee who has lived in Sri Lanka for two years, said he grabbed his two children, dashed into the yard and scampered over two walls before reaching an army checkpoint.

There the mob caught up with him, he said, and delivered a harsh beating, begging the soldiers to let them kill him. Hours later, Mr. Zabi still looked terrified.

Sri Lanka’s Muslims Face an Angry Backlash https://t.co/UlmfsSFoKF via @wordpressdotcom. CRAZY: AHMADI MUSLIMS FACING BACKLASH FOR THE CRIMES OF ISIS. MAY ALLAH HAVE MERCY ON US ALL