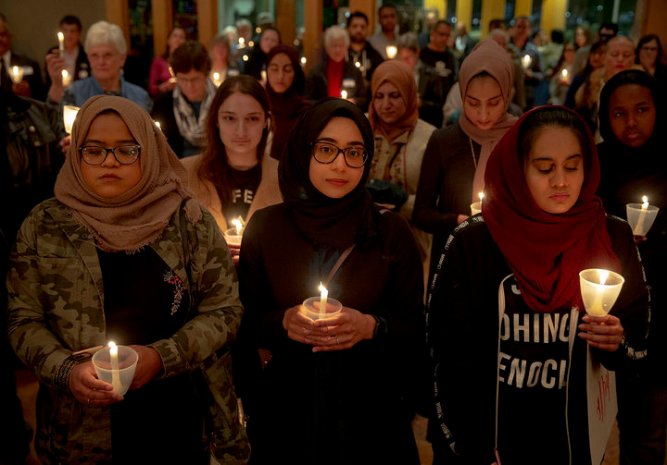 Syeda Sabeera, from left, Sumaiya Syed and Amina Choudhury stand with candles during a prayer service at St. James Episcopal Church on Saturday, March 16, 2019, in Austin, Texas. The service was held in honor of those killed and injured in Friday’s mass shooting at two mosques in Christchurch, New Zealand. (Nick Wagner/Austin American-Statesman via AP)

From personal conversations in coffee shops to mass vigils at universities, here are just some of the ways interfaith allies have been showing their love.

When horrific tragedies grip news headlines, children’s television host Fred Rogers often advised people to “look for the helpers” ― because even in times of great sorrow, “you will always find people who are helping.”

After New Zealand’s mosque massacre last week, that’s exactly what one Muslim-American leader decided to do.

Tarek El-Messidi, an activist from Chicago, asked his Facebook followers on Monday evening to share stories of how non-Muslims have shown their solidarity since last Friday’s shooting. The goal was to create a comprehensive list illustrating “how much good has come out of the tragedy,” El-Messidi wrote in his post.