The evolution of the French far-right’s rhetoric on Islam 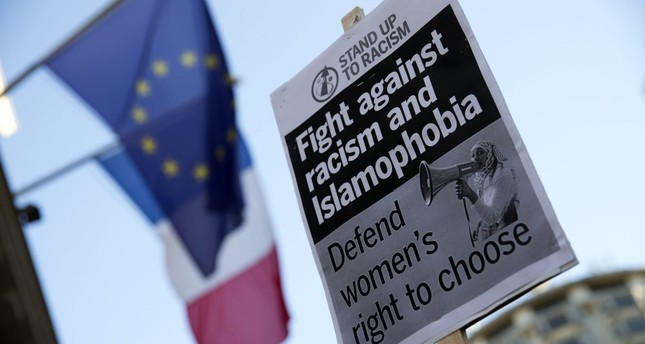 A placard held by a demonstrator at a protest against the Burkini ban on French beaches, outside the French Embassy in London, Aug. 26, 2016.

Anti-Islam speech is not something that naturally emerged in the French far-right. It became progressively more common due to a mixture of electoral calculation and genuine intellectual change. Knowing the reasons helps to counter the appeal of these hostile feelings

“I affirm that nothing in the Muslim religion prevents, at a moral point of view, from making the Muslim believer or practitioner a complete French citizen. On the contrary, its precepts are the same as those of the Christian religion, the foundation of Western civilization.” Who made this statement at the French National Assembly, on Jan. 28, 1958? Jean-Marie Le Pen, at that time the youngest deputy of this assembly.

Such a quote may be a beginning to assess the evolution of the French far-right toward Islam. Islam does not need a definition, but by the French far-right, I mean here mostly three trends: The nationalist populism, that exists since the 1880s (imposing an authoritarian regime with a “savior” who acts against the traditional elites); the Action Française (very briefly: a synthesis between nationalism and traditionalism); and the radical far-right (neo-Fascists, neo-Nazis and groups having emerged more recently from such milieu).

Until the 1950s, the French far-right, as far as it had an interest in Islam and Muslims, either cynically tried to use them against the Jews (particularly in Algeria during the 1890s and 1930s), or, for the more intellectual organizations, such as the Action Française, showed a certain respect, particularly for the Ottomans and Turkish Islam.

In fact, a study of the French press during the Turkish War of Independence shows a kind of sacred union from the Action Française to most of the liberal and Marxist left to defend the Turks. The attacks exist, but they are marginal. The Algerian war from 1954-1962, is the root of the current contradictions. On one side, the religious dimension claimed by the Algerian National Liberation Front (FLN) created a fear of Islam, well beyond the limits of the far-right, actually. That fear is fueled by the flow of refugees (settlers and Sephardi Jews) at the end of the war. On the other side, there was massive participation by Arabs and Berbers with the Fre

nch forces during this same conflict – more often caused by hostility toward the methods and alliances of the FLN, particularly the Soviet alliance, than by any sense of refusal of the independence of their country.

As early as 1962-1963, feelings of revenge turned, particularly in publications like the weekly Minute (which was selling 200,000 copies at that time), into attacks against Algerian immigrants, presented as the main cause of rapes and murders, all crimes supposed to be a continuation of the war.

Regardless, Islam as such remained secondary, with one exception that is important for the most recent period: Dominique Venner (1935-2013) and his organization, Europe-Action (which was active until 1966), which published a review of the same name. Venner, initially a neo-Fascist, did not repudiate the Fascist doctrines as such, but by 1962 saw them as one inspiration among others. His work during the 1960s consists of rehabilitating racism, presented as a way to safeguard a European identity threatened by immigration, and more particularly by Muslim immigration.

Regardless, when the National Front, the FN – renamed the National Rally (RN) in 2018, was established in 1972, immigration was not an important part of its program and Islam is purely and simply absent. The FN initially focuses on anti-Communism, in a broad sense. The results for Jean-Marie Le Pen in the presidential election of 1974 (0.74 percent) provoked an internal campaign by the ideologues of the party and leads François Duprat to impose a theme of immigration. Duprat is inspired by the rise of the far-right in Switzerland since the 1960s and even more in Britain, at the beginning of the 1970s. His reasoning is the following: With immigration, the far-right can gain votes; not unlike the Conservative leader Enoch Powell in Britain, the classical right in France will want these votes and will validate a part of our program, and as a result, our party will not be considered as a pariah anymore.

Duprat died in a spectacular assassination (a bomb under his car, likely placed here by other far-rightists) in 1978, just after having imposed his strategy on Le Pen who initially was reluctant. As Duprat is openly a neo-Fascist, his death and the relative decline of his supporters inside the FN after 1981 paradoxically facilitate the success of his strategy. The attempts of key figures of the French classical right, even before the rise of the FN in 1983-1984, to gain votes by demagogy on immigration and public safety prove this reasoning efficient. That having been said, it is essential to note that Duprat’s strategy targets the alleged social cost of immigration, and that Jean-Marie Le Pen adds the issue of public safety; religion as such is not considered electorally interesting.

It was not until the beginning of 1990s that Franck Timmermans, who has developed his political consciousness in reading Duprat who is, at the time, deputy general-secretary of the FN, develops a specifically anti-Islam rhetoric. Indeed, he considers that school teachers should not be neglected as potential electors, yet only a defense of secularism, supposedly attacked by Muslim immigrants, could gain a significant number of votes from this professional category traditionally hostile to the far-right. At the end of the decade, but this time outside the FN, Guillaume Faye, an important thinker of the far-right during the 1970s and 1980s, who had stopped his militant activities in 1987, restarts them and reverses his previous positions.

Until the 1980s, Faye was fiercely anti-American and saw the Muslim world, including Khomeini’s Iran, as a natural ally. By 1998-1999, his main enemy is now Islam, and the U.S. the natural ally. Faye’s books have been translated into English since the 1980s; the mutual influence between him and the American alt-right is clear, and admitted by both sides.

In France, Faye and Venner are used as the main intellectual reference by the Bloc identitaire, an organization established in 2003 by former neo-Fascist and neo-Nazi leaders, who now claim, after the banner of their organization Unité radicale in 2002, to focus on the defense of the regional, national and European identities, against extra-European immigration, particularly Muslims, although a documentary of Al-Jazeera, “Generation Hate,” released in December 2018, shows quite a different picture. Venner massively contributes, through articles and books, to the Bloc identitaire until his death. Never quite successful electorally, the Bloc identitaire gradually manages, during the 2010s, to place several of its members and ex-leaders inside the FN.

Indeed, after 9/11, the FN begins to intensify its anti-Muslim speeches; see particularly the interview of Jean-Marie Le Pen to Le Monde on April 19, 2003 where he was sentenced to a fine of €10,000 for this statement against Muslims. However the FN would soon hesitate between this strategy and its opposite, which is to say seducing the assimilated Muslims.

The mediocre result in the presidential election of 2007 (10.44 percent) and the arrival of Marine Le Pen at the presidency of the party in January 2011 leads to more aggressive speech regarding Islam.

However, the evolution does not lead to a simple imitation of Geert Wilders’ party, where hostility toward Muslims is the essence of the program. Indeed, from 2011 to 2017, Marine Le Pen develops, with the vice president of the FN, Florian Philippot (who, unlike his predecessors, has no far-rightist background), a political platform centered on national sovereignty, against the European Union, NATO, and so forth.

This scheme explodes during the debate with Emmanuel Macron in 2017, when Marine Le Pen appears unable to master the key issues, the euro in particular, in spite of an impressive number of notes in front of her. Florian Philippot leaves the FN some months later, denouncing a party abandoning national sovereignty for an intolerant conception of identity. His departure is reminiscent of the resignation of Frauke Petry from the Alternative for Germany (AfD) the same year and Nigel Farage from the U.K. Independence Party (UKIP) the next year. All three played with fire and eventually burned their fingers.

Regardless, the current crisis of the “yellow vests” and the diminution of the casualties of Daesh’s terrorism in France incites the FN (now RN) to a return to the Duprat strategy (the alleged social cost of immigration) more than to a Wilders-styled speech, at least for the time being. The French far-right as a whole remains deeply divided on Islam: A significant part – such as the Bloc identitaire, the former far-leftists turned far-rightists of Riposte laïque, and an important number of FN/RN members – advocate an uncompromising hostility; others, like the “ethno-pluralists,” favor an emphasis on the ethnic identity of the Muslim immigrants, particularly Berbers, as a way to integrate them; still others, including inside the FN/RN, affirm to believe in assimilation. And nothing, probably, provokes more different, even contradictory, reactions than today’s Turkey, both inside and outside the FN/RN.

Concerning the most anti-Muslim elements, the police have until now managed to prevent the use of terrorism in arresting those, fortunately not numerous, who are prepared for this kind of violence. Electorally, a large part of responsibility belongs to the classical right: The demagogy of the 1980s largely helped the rise of the FN; Nicolas Sarkozy’s attempts, by 2009, and particularly during the campaign of 2012, to convince far-right voters who had voted for them in 2007 to do so again, have in fact favored Marine Le Pen; and the caricature of the campaign for the European elections of 2014, centered on fears for the national identity, helped the FN even more. It is time to learn from past errors.

* MA in history from Paris-Sorbonne University