Husband of Iranian human rights lawyer says she is sentenced to 38 years, 148 lashes 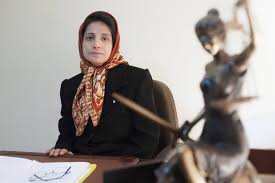 GENEVA (Reuters) – Nasrin Sotoudeh, an internationally renowned human rights lawyer jailed in Iran, was handed a new sentence on Monday which her husband said was 38 years in prison and 148 lashes.

Sotoudeh, who has represented opposition activists including women prosecuted for removing their mandatory head scarf, was arrested in June and charged with spying, spreading propaganda and insulting Iran’s supreme leader, her lawyer said.

She was jailed in 2010 for spreading propaganda and conspiring to harm state security – charges she denied – and was released after serving half her six-year term. The European Parliament awarded her the Sakharov human rights prize.