The way U.S. teens spend their time is changing, but differences between boys and girls persist 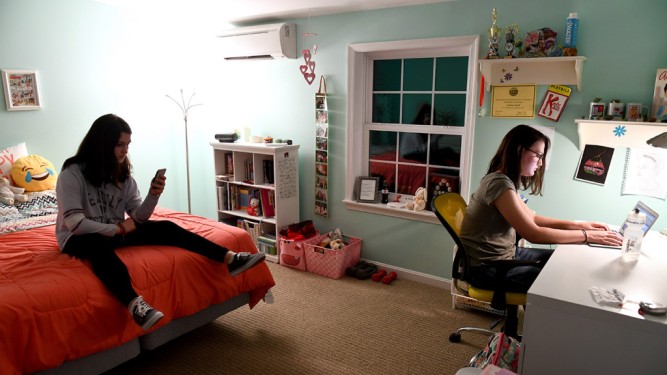 ARLINGTON, VA – MARCH 22: Audrey Smith, 15, right, does homework in her room while her sister, Lauren, 13, hangs out March 22, 2018 in Arlington, VA. Three generations share the home that was renovated to include spaces for everyone. (Photo by Katherine Frey/The Washington Post via Getty Images)

Teens today are spending their time differently than they did a decade ago. They’re devoting more time to sleep and homework, and less time to paid work and socializing. But what has not changed are the differences between teen boys and girls in time spent on leisure, grooming, homework, housework and errands, according to a new Pew Research Center analysis of Bureau of Labor Statistics data.

Teens are also getting more shut-eye than they did in the past. They are clocking an average of over nine and a half hours of sleep a night, an increase of 22 minutes compared with teens a decade ago and almost an hour more than those in the mid-1990s. Sleep patterns fluctuate quite a bit – on weekends, teens average about 11 hours, while on weekdays they typically get just over nine hours a night. (While these findings are derived from time diaries in which respondents record the amount of time they slept on the prior night, results from other types of surveys suggest teens are getting fewer hours of sleep.)