Ahmadiyya Islam Message given to Participants of Tabligh Meeting in Macedonia 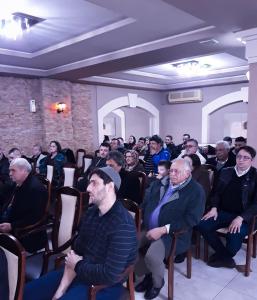 Being local president and Missionary of Ahmadiyya Jamaat in Macedonia Mr Wasim Ahmad utilized propped up opportunity to spread the Ahmadiyya Islam Message. On 22.01.2019, availed the chance of presence of Mr Abdullah Wagishauser, National Head of Ahmadiyya Muslim Community Germany who had traveled from Kosovo to participate in official handing taking ceremony of a special van donated by Humanity First Germany to Municipality of Kumanovo-Macedonia.

Through active Macedonian Ahmadiyya members, Dr Orhan and Mr Ramadan invitations were extended for tabligh meeting which was organised at 16.00 hours in the hall of  a local restaurant. Alhamdolillah approximately 100 participants showed up. 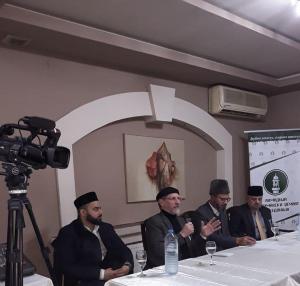 Starting with recitation of Holy Quran first speaker appeared to be the Mayor of Kumanovo who along with his staff member specially came to participate in the meeting. Since the mayor had already attended German Jalsa in 2018 as such Ahmadiyya Community is well known to him.  In his short speech he amicably applauded the peace efforts done by the spiritual head of the community. Along with he also appreciated humanitarian work of Humanity First. 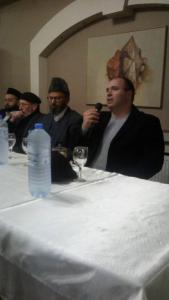 In second speech being Missionary of Ahmadiyya explained in detail the beliefs of Ahmadiyya community and drew the attention of participants to examine Ahmadiyya Teachings.
Mr Abdullah Wagishauser, National Head of Ahmadiyya Community Germany in his speech amicably explained the current encouraging situation of Ahmadiyya youth who compared to other Muslim groups are very active in religious activities. He also stated that in spite being very small number (just 50 thousands out of 5 millions Muslims residing in Germany) Ahmadiyya community has built 50 proper mosque while whole Germany has 150 mosques. Loyalty of country where some one lives was also highlighted by the AMJ Germany Head.
At the end of the meeting participants were served with dinner. Almost all participants appreciated all the speeches and applauded the efforts of AMJ Macedonia to spread the true message of Islam