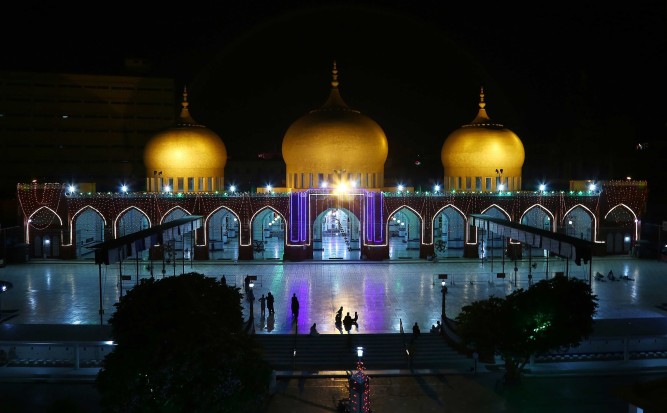 The Memon Mosque at night in Karachi, Pakistan. CreditCreditShahzaib Akber/EPA, via Shutterstock.  The Muslim Times has the best collection of articles about the prophet Muhammad, may peace be on him

By Haroon Moghul, who is the author of “How to Be a Muslim: An American Story.”

Tuesday is the Prophet Muhammad’s birthday. It’s the 12th of Rabi al-Awwal, the day most Muslims believe he came into the world some 1,400 years ago.

I first met Muhammad in August 1998. I was fresh out of high school in Somers, Conn., and my brother and I made the road trip from Jidda, where he was working for the summer, to Medina to pay our respects at Muhammad’s tomb.

I must have looked ridiculous. I was drowning in elephantine JNCO jeans and carried a backpack with a Pearl Jam patch ironed on. I was probably wearing the boisterous baseball cap of some snowboard manufacturer; I hope I left the wallet chains at home.

I was on my way out of Islam when I made my way with the rush of tens of thousands of pilgrims shuffling from the prayer hall southward toward his tomb. I was headed to atheism. Or Catholicism. I was 18 years old and hadn’t decided which way of life would give me the warmth I felt my faith lacked, and the freedom I believed it denied me.

But I showed up in Medina that summer because I thought I’d give Islam one more chance. I hadn’t expected the moment to mean much to me, because Islam didn’t mean much to me. But there I was, facing the resting place of the prophet, overcome with emotion.

I’d memorized Muhammad’s life story in Sunday school, cramming facts, dates, lineages into my head as if I was preparing for an A.P. exam, a good Muslim like my parents wanted me to be. But it had thus far been so much data — cold, abstract and inhuman.