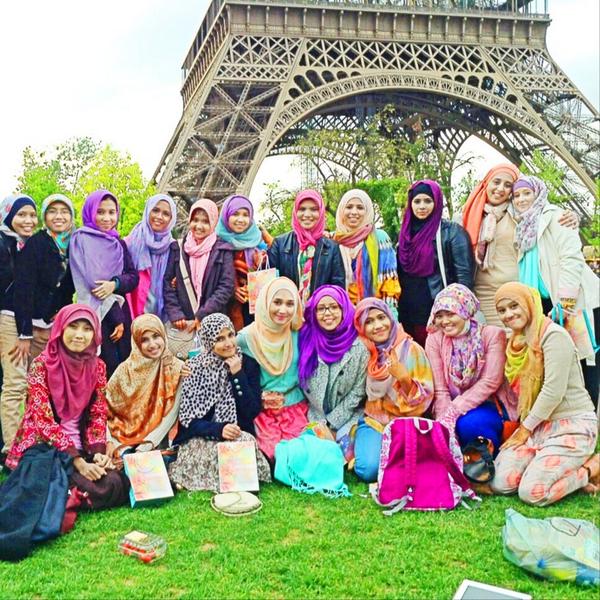 Hijabi girls in front of Eiffel Tower in Paris. The Muslim Times has the best collection to refute Islamophobia and promote secularism in every country of the world

By Colin Randall, who is a former executive editor of The National

In perhaps the biggest gamble of his risk-taking French presidency, Emmanuel Macron is considering a bold constitutional change affecting Muslims as part of his strategy to combat extremism.

Mr Macron’s initiative to formally organise Islam in France was originally promised in the first half of the year. After repeated delays, driven by the deep sensitivities of the task he has set himself, it is now expected in the new year.

Reports in the country’s media suggest it may include a proposal to amend a cornerstone of French society: the 1905 law separating church and state; a distinction cherished in the country’s secular republican tradition.

This would enable assistance for religious institutions from public funds, which is not permitted under the law as it stands. The aim of this approach would be to end the reliance on overseas funding for new mosques, their upkeep and the training of imams, facilitating a more structured system, even in relatively poor areas where Muslim leaders find matters of funding and organisation to be particularly challenging.

Because secularism is so rooted in France, a principle that unites natural enemies on the left and right, such a step would arouse fierce opposition across the political spectrum.

Macron is already among the most unpopular French presidents of recent times. Given how unhappy the French electorate became with Francois Hollande, Nicolas Sarkozy and Jacques Chirac, that is saying a lot. Many who last year welcomed the election victory of the youngest president in French history now dismiss it as, above all, a vote against his far-right opponent Marine Le Pen.

Portrayed by the left as a “president for the rich”, Macron has also been the target of two far-right assassination plots. The latest involved a foiled plan to stab him with a ceramic knife during ceremonies marking 100 years since the end of the 1914-1918 war.

Part of the reason for his broader unpopularity – one recent poll put his approval rating as low as 21 per cent − is his commitment to changes in social and economic policy that he believes are essential to France’s future. The French tend to nod in approval when presidents promise reform, only to recoil in horror once it threatens to affect them.

Mr Macron has confronted powerful groups, including militant railway workers accustomed to getting their own way. Teachers, pensioners and motorists hit by cuts and soaring fuel prices have protested, and ministers have departed in despair. But the president has generally shown a strikingly non-French resolve to tough it out.

On France and Islam, the Elysee Palace insists that the president’s deliberations remain incomplete. But the magazine L’Opinion claims to have seen a preliminary draft of what Mr Macron will say when he finally outlines his vision for the way France’s largest religion after Catholicism should be structured.

It is widely accepted, by a number of Muslim observers as well as mainstream political figures, that the present organisation of Islam in France is fragmented and often dependent on foreign benefactors. However, many Muslims are suspicious of state interference that excludes them from consultation processes. The country’s biggest representative body, the French Muslim Council, bitterly complains that this is exactly what has happened.

Among other suggestions the president has considered is the idea of a “halal tax” − a small levy, collected by Muslims themselves, on halal products, pilgrimages and donations.

The idea was floated in a report for the Montaigne Institute, a leading French think tank, and submitted to Mr Macron by Hakim El Karoui, a French banker-turned-academic whose uncle, Hamed Karoui, served as Tunisian prime minister for 10 years.

Mr El Karoui said the proceeds could fund mosques, the training and remuneration of imams, and projects to oppose both anti-Muslim xenophobia and what he controversially described as “the anti-Semitism shown by some Muslims”. Reaction, on all sides, was mixed.