Belief is back: why the world is putting its faith in religion 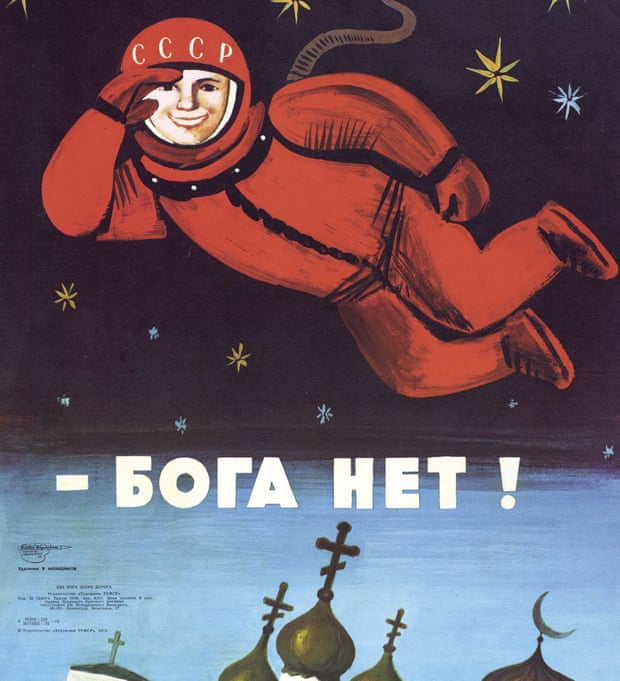 ‘There is no God,’ says Yuri Gagarin in this 1975 Soviet propaganda poster … The Road is Wider Without God/God Doesn’t Exist by Vladimir Menshikov Photograph: The State Museum of the History of Religion, St Petersburg, Russia

By Neil MacGregor, who was the director of the British Museum between 2002-2015. He is the author of A History of the World in 100 Objects and Living With the Gods.

Fifty years ago, religion was on the retreat as science advanced. Now it is centre stage of global politics. What does it offer the modern world, asks Neil MacGregor

It must surely be one of the most beguiling and evocative posters of the 1970s. High above the Earth, floating serenely among the stars and loosely tethered to a speeding spaceship, Yuri Gagarin smiles out at us and salutes. The first man in space is dressed in brilliant communist red, and emblazoned on his helmet are the letters CCCP (the Russian initials for the USSR). Above the skies, he looks around and tells us what he can see, or rather what he can not see: Boga Nyet!: There is no God! Below him are the toppling towers and domes of churches and mosques, left behind and condemned to imminent collapse by the soaring achievements of Soviet science. The old religions are withering away. Reason and research have raised humanity to a new idea of heaven – we can now all join Gagarin in an achievable paradise, empty of divine beings, and full instead of starry promise.

A photograph taken 42 years later, in May 2017, is an equally compelling image of our own decade. It shows what popular songs long regarded as perhaps the nearest thing to heaven on earth – Paris in the springtime. But this is no romantic glimpse of the world’s favourite tourist destination. We are in the working-class suburb of Clichy. In the square in front of the mairie, beneath the French tricolour and the stars of the European Union, and under the watchful eyes of the police, God is being defiantly worshipped on the public highway. Hundreds of Muslim men are kneeling in prayer to protest at the closure of their unauthorised mosque. The secular French state, its republican values built on the basis of an absolutely non-negotiable laïcité (secularism), is being peacefully but fundamentally challenged by a group claiming the right to be loyal French citizens while asserting that they (and millions of others) also have rights as members of a religious community. As the notorious row about the burkini showed just a few years ago, these are not claims that France finds it easy to accommodate.

Both images are entirely characteristic of their time, with resonances far beyond their place. The Soviet poster was of course devised as propaganda, but the assumptions behind it were very widely shared. In the 1970s, most politicians in the US and western Europe, as in the USSR, broadly believed that scientific advance, material progress and growing prosperity would lead to the continuing retreat of faith from the public realm. Just as important, nearly all shared the view later articulated in Bill Clinton’s 1992 presidential campaign, that the most significant political determinant would ultimately be “the economy, stupid”.

Russia now defines itself loudly and proudly as Orthodox. Putin is ostentatiously devout. Even the KGB has its own church

All that has changed. In the Russia that has emerged from the wreckage of the USSR, state atheism is decidedly a thing of the past. The country now defines itself loudly and proudly as Orthodox. President Putin is ostentatiously devout. The Cathedral of Christ the Saviour in Moscow, dynamited on Stalin’s orders in 1931, has been meticulously rebuilt. Even the KGB has its own church. Beyond Russia, the competitive materialisms of the cold war have been in large measure dislodged, or at least recast, by a different discourse. To an extent rarely seen in Europe since the 17th century, faith now shapes a significant part of the global public debate.

What is wrong with the Orthodox Church?

The Cathedral of the Resurrection of Christ, St Petersbugh, Russia. Each religion and sect is trying to assert political control and the Muslim Times is promoting secularism in every country of the world