Celebrate Eid without giving your stomach a hard time 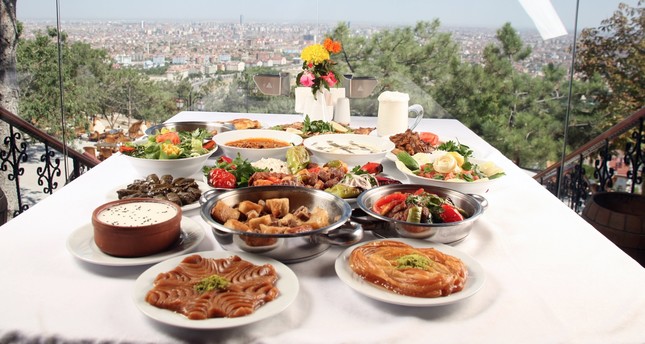 Ramadan is over and it is time to celebrate Eid al-Fitr, which means a lot of chocolate and sweet treats but be warned: After a month of fasting, over-eating might cause some unwanted discomfort

Fasting brings along reformation, body cleansing and rest. During the last month, Muslims around the world have experienced a general washout period, both materially and spiritually. However, during the month of Ramadan, which coincides with summer months, 17 hours of hunger and dehydration and excessive loss of water due to increase in temperatures have affected the normal order of metabolism, as well as eating habits.

Prof. Dr. Nevin Şanlıer, from the Faculty of Health Sciences at Lokman Hekim University, stressed that adequate and balanced nutrition is very important while fasting, as well as during Eid-al-Fitr when the eating regimen returns to normal.

“It is beneficial to consume milk and yogurt in the milk group, meat, chicken, eggs, cheese in the meat group, dry legumes, vegetables and fruit, and bread, bulgur, pasta, rice and similar foods in the grain group in sufficient amounts during main meals,” Şanlıer said.

Şanlıer emphasized the importance of diet after Ramadan, noting that it is essential to start the day with a light breakfast.

Breakfast should not be skipped in order to avoid excessive consumption of food later in the day, and in accordance with adequate and balanced nutritional rules, consumption of food should be kept little and often, while foods should be consumed slowly by chewing well. Considering that saturation begins to be felt after 12-20 minutes of eating, it is imperative to eat slowly in this regard.

“Take frequent breaks between bites while eating. Increase fluid consumption. In order to replace liquid lost in hot summer months, 10 to 12 glasses of clean and reliable water should be drunk per day, and freshly squeezed fruit juices, low sugar or unsweetened compote, lemonade or ayran should be preferred over soft drinks,” Şanlıer continued, adding that lemon juice, peppermint, cloves, ginger and cinnamon will give flavor to these liquids, creating a refreshing effect and enhancing your digestive power. “After meals, prefer digestive-friendly mate, white and green tea to accelerate the slowing metabolism,” she added.

Individuals are advised to pay attention to coffee and tea consumption throughout the day, prefer herbal teas, and avoid consuming more than two cups of coffee a day, Prof. Dr. Şanlıer said, stressing that those with chronic diseases (diabetes, hypertension, cardiovascular diseases, etc.), should pay attention to the increased consumption of sugar together with chocolate and sweet treats, which have become a tradition during Eid-al-Fitr.

During Eid-al-Fitr celebrations, the consumption of sweets and chocolate should be kept under control and individuals should keep away from the persisting attitudes and excessive eating tendencies in their surroundings. If it is desired to consume dessert, milk puddings should be preferred instead of doughy and sherbet desserts. If you want to make healthy sweet choices, you can always consider serving dried fruits such as apricots, dates and plums to your guests instead of sugar and chocolate, milk puddings and ice cream instead of sherbet desserts, as well as fresh fruits, hazelnuts, walnuts and almonds as long as you keep the portion under control, underlining that guests should avoid excessive insistence to eat since they will be welcomed with refreshments everywhere they go.

Stay away from fried desserts

Pointing to the amount of salt consumption, Şanlıer recalled that excessive salt intake during the summer may cause increased blood pressure, while its inadequate consumption can lead to very dangerous health problems by disturbing the balance of fluids between our cells. She suggested that you should make sure not to exceed six grams of salt per day (a dessert spoonful). “For this reason, you should absolutely reduce salt intake. The amount of sodium found in foods is sufficient for you. Excessive salt intake can cause bloating in your body as a result of water retention, causing thirst at the same time,” Şanlıer said. Stating that vegetable oils (sunflower, hazelnut oil, olive oil, corn oil, etc.) should be used in meals, and that it is very important not to add extra oil to meat dishes, Şanlıer said instead of frying and roasting methods, boiling, grilling and baking in the oven should be preferred and plenty of peppermint, parsley, onion and such should be added to dishes.

“In particular, prefer grilled, boiled and baked dishes and avoid roasted, smoked and fried foods. Stay as far away as possible from deli products such as bacon, sausages, salami, greasy foods, pastries, spicy foods, as well as fried desserts,” she said.

Giving some recommendations on the choice of food to those going on a vacation during the holiday, Şanlıer said excessive food should be avoided on menus, especially those offered in open buffet style, and food should be selected to provide adequate and balanced nutrition from open buffet, urging holidaymakers to avoid overly salty, oily and sugary foods, as well as creamed foods, raw eggs, milk and fish left outside. “Food poisoning is an important public health problem, increasing especially in the summer months. Although they are mostly mild and short-lived diseases, some factors related to food leading to poisoning and the person in question may cause the illness to become more severe or even fatal time to time,” Şanlıer said.

Şanlıer stated that foods that are sold outside and outdoors in the summer should be avoided and potentially risky foods (meat, eggs, milk, fish, etc.) that quickly go bad should not be left outside. While hygiene rules must be taken during preparation and cooking of food, and hands, vegetables and fruits should be thoroughly washed before eating. “People with diarrhea should refer to the nearest health facility. It is important to increase the energy expenditure because of the increase in the consumption of energy-rich foods through the holiday visits,” she said. “Increased physical activity will also allow for the metabolic rate, which decreases due to fasting, to increase. Doing physical activity for 45 to 60 minutes a day with an empty stomach should not be neglected. The activity that best suits us, such as hiking and swimming, should be done regularly.”