Cyprus: The cultural and archaeological heritage of Mediterranean 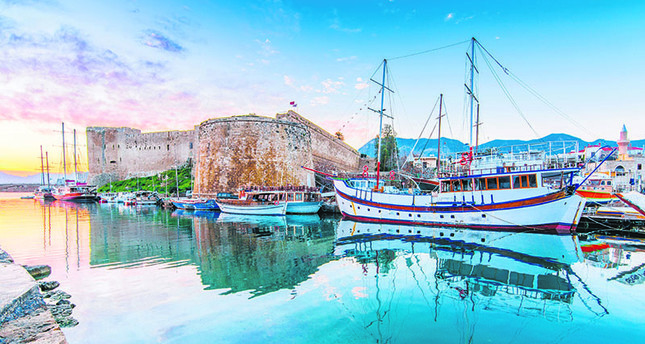 With its heavenly orange blossom breezes, the Mediterranean island of Cyprus has much to offer – pristine beaches, turquoise waters and interesting historical sites

The sky is blue in Cyprus and the sun is shining brightly now that warmer weather has arrived. The energy of nature revived every spring is taking over the island readying for summer. The month of May is an excellent time to enjoy all the island has to offer, including its great beaches. The following is a small introduction to the island starting with its beaches for those longing for the trinity of sea, sand and sun.

Palm Beach in Famagusta province was once a favorite spot for vacationers in the Mediterranean until the Turkish military’s intervention in 1974. The houses of many world-famous artists, including Sophia Loren, sit along the beach. In one section of the beach you can even find sun lounges, umbrellas, showers and bathroom services. If you are lucky, you can swim with sea turtles, as well.

The most crowded beach in the region is Glapsides Beach, just 4 kilometers away from Famagusta. With its gradual incline and shallow depths, it is ideal for families with children and sports lovers. This long beach is perfect for a variety of water sports, including diving. Silver Beach, which is really close to Glapsides, is perfect for those who prefer to swim in deeper water with its more drastic incline. For those who want to swim right in front of the ancient city of Salamis, Kocareis beach, located on the same route, is also popular. The beach is large and boasts deeper depths.

You can also visit the beach of Acapulco Resort in Kyrenia province by paying an entrance fee. The resort offers an entertaining environment with many activities, such as beach volleyball, tennis and basketball; or try your luck surfing on huge waves. One of the biggest swimming pools of Cyprus is here, as well.

Escape Beach Club is also an excellent choice, situated between Kyrenia and the town of Karavas. With the entrance fee you gain access to pillows for sunbathing on the grass or sun lounges. You could also grab a bite to eat at the restaurant behind the beach. Escape Beach Club also offers water sports, such as scuba diving, canoeing and paddleboats and is very crowded in the summer season.

Many believe the cleanest water of the Mediterranean is in the region of Karpass. Mehmetcik Beach is clean, well-kept and excellent for a variety of sports activities.

In Rizokarpaso Village, the last settlement of Karpass, ecotourism is prominent. In Ayfilon, which is 3 or 4 kilometers away from the village, you can enjoy swimming in a bay located in front of a small monastery. Don’t forget your snorkel and goggles because you will be swimming right over submerged pieces of broken amphora — large ancient Greek jars and vases.

Cyprus has played an important role in the region for centuries as is positioned between Eastern and Western civilizations and has been included in religious and trade routes for both sides. It also hosted various civilizations, such as Phoenicians, Egyptians, Persians, Romans, Byzantines, Venetians, Ottomans and the English. You can follow the traces of these civilizations by the structures they left behind, such as entrance gates to the cities, castles, religious buildings, inns and ancient cities in the different regions of the island.

Kyrenia Castle was built by Byzantines to protect the city against Arab attacks in the seventh century. The castle was used for defense and for resting in peaceful times. If you want to visit the castle, you will need to set aside at least an hour. Be sure to follow the signs while visiting to easily find your way around.

The most touristic village

Ballapais is a small Mediterranean village dotted with lemon and pomegranate trees. It is one of the most beautiful touristic places on the island with its restored, single-family detached homes with gardens, small, shabby coffee houses and sincere people. Bellapias Abbey, located in the village, is one of the most important examples of Gothic architecture on the island. Visitors are welcomed by Cupressus trees in the entrance to the abbey and periodic music concerts are held here, as well.

Saint Hilarion Castle is located on the west side of the island and is one of the three castles in the Kyrenia Mountains. It is situated on two steep hills at 700 meters above sea level. The castle was named after a monk who immigrated to Cyprus after Jerusalem was conquered by Arabs and spent the rest of his life worshiping there. Restored in the Byzantium period, the castle was abandoned to its fate after Venetian’s took over the island in 1489. The mystical atmosphere here has inspired many artists.

After the French House of Lusignan took over in the island in 1192, they decided to build a second Notre Dame Cathedral. Therefore, the Cathedral of Saint Sophia was constructed. The Gothic cathedral opened for worship in 1326. It was plundered by the Genovese in 1373 and by the Mamelukes in 1426. After the Ottomans conquered the island, it was turned into a mosque and named after the Selim II, known as Selim the Blonde, as Selimiye Mosque. 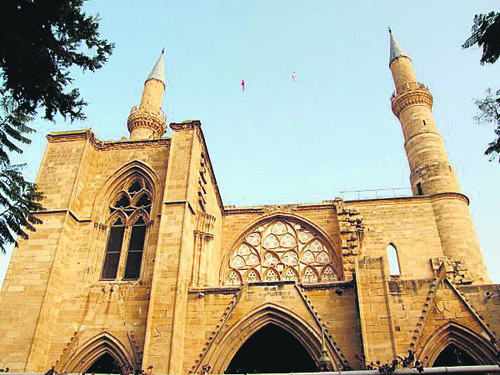 The Cathedral of Saint Sophia was turned into Selimiye Mosque after the Ottomans conquered the island.

One of the places that comes to the mind when Famagusta is mentioned is the Namık Kemal dungeon and museum. Namık Kemal was exiled to Cyprus in 1873 when he wrote “Vatan Yahut Silistre” (Homeland or Silistra) and staged it. He spent his exile in this dungeon. Located in the yard of Venice Palace, the dungeon is a rectangular two-story structure. After staying here for 36 months, the poet was pardoned in 1876. However, he did not leave the city. The building was later used as an artillery barracks and prison, as well. Turned into a museum after a restoration in 1993, the structure features photos and belongings of the poet.

Othello Castle was built by the House of Lusignan to protect the port against enemy attacks in the 14th century. It was surrounded by deep ditches when first built. As the enemies who attacked could not pass the ditches, the castle became famous for being impregnable. Historians believe that Leonardo da Vinci advised the Venetians about the defense system of the city during a visit to Cyprus in 1481. The name of the castle came from the period when the island was colonized by the English. A big part of “Othello,” the famous tragedy of William Shakespeare, was fictionalized in Cyprus. 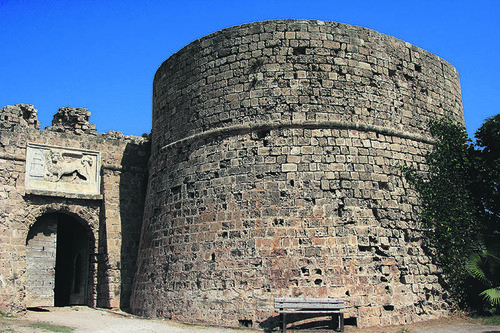 Built by the House of Lusignan in the 14th century, Othello Castle is one of the historical sites in Cyprus.

The ancient city of Soli

Soli was one of the 10 kingdoms established on the island; this one established during the Roman Empire’s golden age. It disappeared after Arab raids in the seventh century. The theater, marketplace, church, fountain and temple that were uncovered during excavations of the ancient city in the 1920s are worth seeing