Toronto Police are investigating the cause of hateful graffiti that was discovered by a passerby early Monday morning on a wall of the Scarborough campus of the Wali ui Asr Learning Institute. Caryn Lieberman has more.

Toronto police say they are investigating hateful graffiti that was discovered at a Muslim school in Scarborough early Tuesday.

Police confirmed officers responded to a call to the Wali ui Asr Learning Institute around 9:45 a.m. Monday after a passerby noticed the spray-painted graffiti on the side of the school’s wall.

The school was closed Monday for the Victoria Day holiday so officers have yet to speak to anyone but will be returning Tuesday to follow up.

Coun. Glenn De Baeremaeker told Global News on Tuesday he was biking by the school Monday night when he saw the graffiti.

“I was just shocked. I thought there was going to be 250 kids and their parents coming to the school the next morning and to see this type of hate and this type of filth,was just not acceptable.”

He said he called Counc. Jim Karygiannis who came to the school right away and contacted city staff who made sure to clean the graffiti off before students came to school Tuesday.

“Innocent children who are five or 10 years old shouldn’t have to be dealing with this type of hate,” De Baeremaeker said, adding they also spoke to a local imam to decide whether or not to clean it off before anybody else saw it. They ultimately came to the decision to make the public aware.

“This has happened and one idiot has said some hurtful, horrible racist things but we want the world to know and the local Muslim parents to know that we stand with them as neighbours and as friends,” he said. “Everybody from every country in the world is welcome here.” 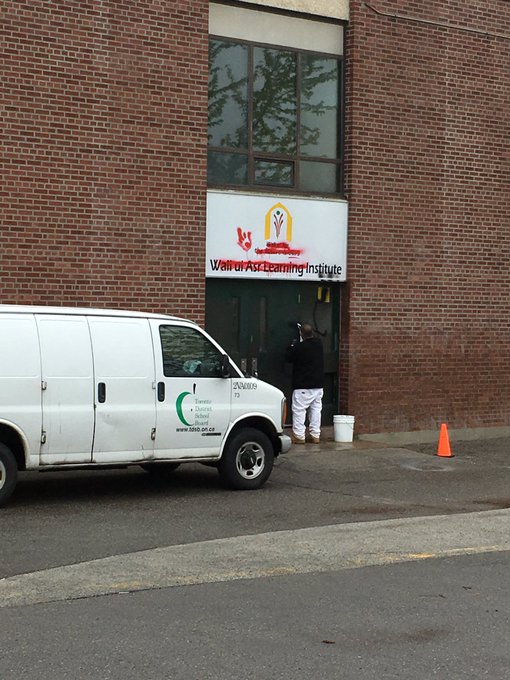 A spokesperson from the school, which has multiple campuses across southerwestern Ontario, told Global News Tuesday they were made aware of the situation just before 11 p.m. Monday night.

“We are grateful to the city councillors, the city crews and the larger community for the outpouring of support we have received since the incident,” the school said. “In these holy days of Ramadhan, we thank Allah for being part of a respectful and tolerant society; the actions of a misguided individual does not change the spirit of co-existence that is an integral part of the fabric of the Canadian society.”

The school said it plans to use the incident as a positive learning experience for its students and they will have them “focus on the exceptional support we are receiving.”

Karygiannis told Global News he was “shocked” that this kind of hate is happening, but said it’s not the first time he’s seen something like it.

“But every time I see it, I get infuriated,” he said. “This is not what the city of Toronto is all about. We say ‘diversity is our strength’ — that’s our motto.”

“It horrifies me that anyone would do this during Ramadan.”

Karygiannis said he wants to see something in place that helps schools that have incidents like this one to have a camera or something to help watch out for them.

“There was a federal program that we had done with mosques, synagogues and temples … and it behooves us as the city of Toronto to help the school to help get a camera out here in order to catch whoever has done this.”

Mayor John Tory tweeted about the incident calling it “hateful” and “unacceptable.”

“This hatred is unacceptable at any time but it is disturbing someone would choose to do this during Ramadan,” one tweet read.

“I know Toronto police will use every effort to track down whoever did this,” another one said.

City council is set to meet later on Tuesday and Karygiannis said he and De Baeremaeker would table a motion to help get schools funding to put cameras up.

Police said the investigation is ongoing. Officers will be searching for any cameras in the area and any witnesses who may have seen something.