Muslims Recoil at a French Proposal to Change the Quran

A manifesto published in the French daily Le Parisien on April 21—signed by some 300 prominent intellectuals and politicians, including former President Nicolas Sarkozy and former Prime Minister Manuel Valls—made a shocking demand. Arguing that the Quran incites violence, it insisted that “the verses of the Quran calling for murder and punishment of Jews, Christians, and nonbelievers be struck to obsolescence by religious authorities,” so that “no believer can refer to a sacred text to commit a crime.” 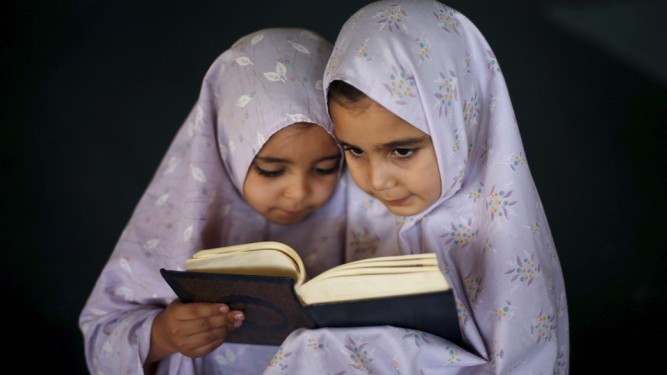 Palestinian girls read the Koran as they attend a Koran memorisation lesson during summer vacation inside a mosque in Gaza City June 7, 2015. REUTERS/Mohammed Salem TPX IMAGES OF THE DAY – GF10000119794

Although it’s not entirely clear whether “struck to obsolescence” means wholesale deletion of verses, the manifesto was perceived as a call to abrogate Muslims’ holiest text. And although pushing for a theological reform of Islam in France is nothing new—everyone from leading imams to President Emmanuel Macron have made plans to restructure Islam—demanding that scriptural verses be deleted is another thing altogether. In Islam, the Quran is considered divinely revealed; because it’s deemed to be the word of God, altering or deleting any part of the text would be blasphemous.

Defensive War in the Holy Quran in 600 Words

The Holy Quran as the Miracle of the Holy Prophet

An Everlasting Miracle of the Holy Quran