The 2018 awards season started out wide open. Way back in December, even as initial screenings of The Post had some ready to call the whole thing early, there were still a number of contenders, any one of which felt like a viable indie David to Steven Spielberg’s Goliath. Then came January’s awards ceremonies — Golden Globes, Critics’ Choice, Screen Actors Guild — and the dominance of Three Billboards Outside Ebbing, Missouri had prognosticators asking, “Steven who?” 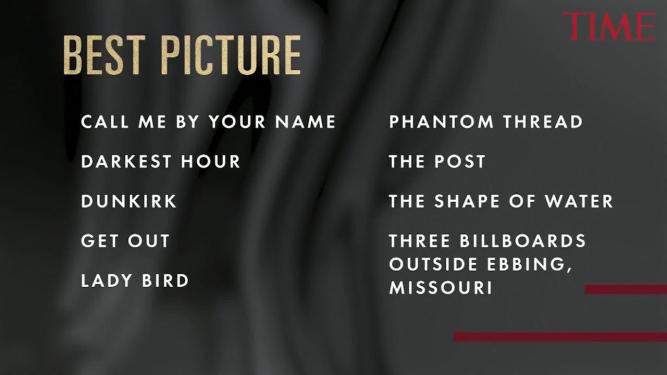 All of that happened before the nominations for the 90th Academy Awards were even announced. When they were, early Tuesday morning, the final act of the 2018 awards season began to come into focus. Although there’s still a ways to go before the Oscars air on March 4 —final ballots aren’t due until Feb. 27, later than usual thanks to the Winter Olympics — here’s what the 2018 Oscar nominations tell us about how this year’s awards are shaping up.

The Shape of Water received the most Oscar nominations, with 13. Dunkirk followed with eight, while Three Billboards Outside Ebbing, Missouri continued its streak with seven. (While some might have expected Three Billboards to come out on top, The Shape of Water‘s dominance across technical categories gave it the edge, and Dunkirk performed strongly across those fields, as well.) Based on how Three Billboards has fared throughout awards season thus far, especially in the acting categories, its dominance isn’t surprising. But moviegoers’ enthusiasm for fellow Best Picture nominees like Get Out, Lady Bird, Call Me By Your Name and The Post makes Three Billboards‘ continued reign, especially in light of the controversy surrounding it, a bit of a head-scratcher. The Shape of Water looks like it’s squarely back in the running, but the narrative’s going to have to majorly shift if Three Billboards is to be dethroned before the first Sunday in March. Campaigners have their work cut out for them.