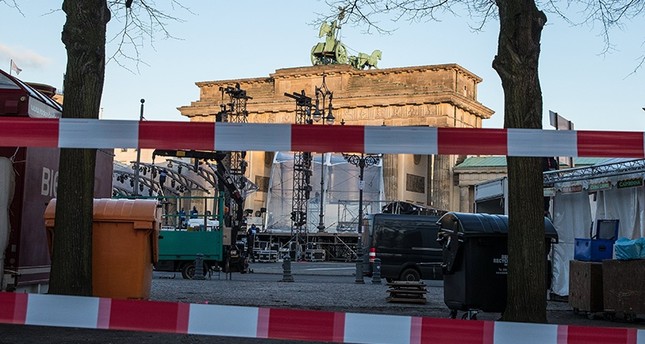 The area between Berlin’s June 17 street and Brandenburg gate is blocked in preparation for New Year Eve’s celebrations at the Brandenburg Gate in Berlin, Germany, 29 December 2017. (EPA Photo)

Organizers of Germany’s biggest New Year’s Eve party at Berlin’s Brandenburg Gate are setting up a special safety zone for women who have been assaulted or feel threatened.

The move comes two years after hundreds of women were groped, sexually molested and robbed by gangs of men during New Year’s Eve festivities in Cologne.

Hundreds of thousands of revelers are expected to flock to Berlin’s “party mile” on Sunday in front of the Brandenburg Gate in the heart of the city.

The annual open air event with fireworks, live bands and DJs, continues into the early hours of the morning.

Berlin police confirmed that this year women would be able to seek help in an area staffed by the German Red Cross.

“The organizers have set up a safety zone for women who have been victims of a sexual offense or are feeling harassed,” a police statement said.

Anja Marx, a spokeswoman for the event, said there would be a tented area with psychologists on hand.

“We are doing this for the first time,” she told the Thomson Reuters Foundation by phone. “The police requested it after they did it at the Munich Oktoberfest this year and it worked out well.”

She said there had not been problems at previous New Year celebrations in Berlin.

The mass assaults two years ago in Cologne shocked the country.

A police report described how women were surrounded by gangs of men who sexually assaulted them, often while stealing their wallets and phones.