400 migrant children in Calais separated from parents due to French delays, report says 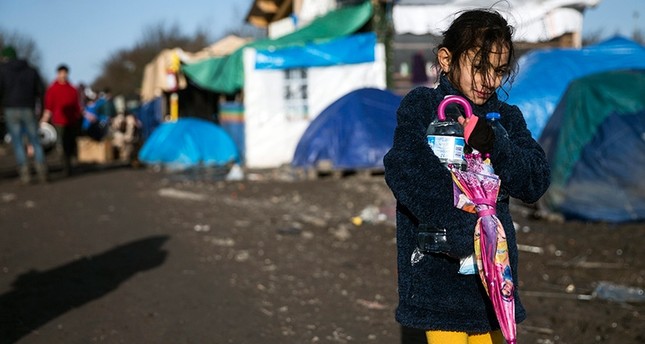 A young Kurdish girl walks along the muddy road framed with tents and shacks in the makeshift migrant camp in grande-synthe near Dunkirk, France, Jan. 16, 2016 (EPA Photo)

About 400 asylum-seeking children in France live seperatelyseparately from their parents due delayed processing of immigration requests to England, according to a recent Bar Human Rights Committee (BHCR) report.

France has not enacted the necessary legal processes for nearly 400 children to go to their families in the U.K., the report says.

Children were left without a parent after security forces released about 10,000 people on their way to the U.K. from the “Jungle” asylum camp in Calais, France.

For most migrants, Calais is the last stop before attempting to cross the short sea stretch to the U.K. It has become a symbol of Europe’s troubles dealing with the influx of migrants.

The French government carried out several evacuation missions of makeshift asylum camps in Calais, the most recent removing 557 migrants on on September Sept.19 , 2017.

Many are Afghans and Iraqi Kurds, but there are also Iranians, Pakistanis and Sudanese.

President Emmanuel Macron has said ending the migrant crisis is a priority and that he wants migrants off France’s streets by the end of the year.