Modern insurance system has its roots in medieval Anatolia 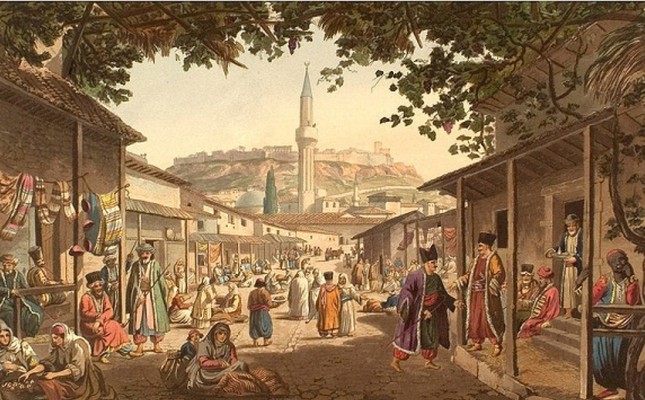 A painting portraying a market place in former Ottoman capital Bursa. During the Seljuk and Ottoman period, trade was an important part of daily life and “derbend guards” were first to introduce insurance from Anatolia to the rest of the world.

A few centuries ago, protecting roads in Anatolia was honorable work for its people, which led to the establishment of a primitive accident insurance system

The geography of Anatolia and Rumelia is generally mountainous, which makes navigation through the territory, even these days, quite perilous. With mountains rising high on both sides, roads twist and turn along passages in deep valleys. These mountain passes are known as “derbend” (narrow passes) in Persian.

For centuries, these valleys have been prime targets of bandits and thieves, as they provided ample opportunity to block off roads, using stones and logs, to rob travelers.

Under the Islamic-Ottoman law, the punishment for highway robbery and/or banditry was heavy. If someone was found guilty of robbery or killing of travelers, he would be hanged to death.

However, it was always a good idea to take certain precautions, before a road was actually blocked, given, with no efforts to improve road safety, trade would not improve and there would be no sense of freedom while traveling. This gave birth to “Derbend Organizations.” Established on vulnerable mountain passages, since the time of the Seljuks, these were small outposts employing civilian guards to provide and maintain road safety. There were also small mosques, stores for travelers, and inns for accommodation, around these outposts. At times, these establishments almost took the shapes of small towns.

Some or all the people living in villages near these valleys were assigned to guard the mountain pass, and in return they enjoyed certain tax exemptions.

If there was a case of banditry and goods of a traveler were stolen, the guards were held responsible and were asked to compensate for it. This formed a primitive form of trade insurance, dating way back before the modern insurance system developed in Italy in the 13th century.

In the insurance system practiced by the Turks, the state paid the insurance premium, while the risk was undertaken by the guards. It was the state’s sole responsibility to ensure both internal and external safety.

The honor of a village

Guards waited in small fortresses or outposts in turn. These guards in strongholds were organized in military style, but in places without strongholds, checkpoints were built. A relevant state minister inspected the guards throughout the year.

The guards were only responsible for their own derbends and they were not allowed to abandon their posts. If necessary, they provided guide services to travelers for a certain fee. Protecting the derbends was a matter of honor for the guards, who were the knights of the modern age Asia Minor. That is why crimes like robbery, murder and rape were not commonly heard of on Ottoman roads.

However, as trade routes and travel increased over time, the derbend organizations began to fall short and soldiers paid for by the people, started to take over in the 17th century. New towns were established at crossroads in order to maintain road safety and later, in the 19th century, the military guards were replaced with gendarmeries.

Muslims communities’ encounter with modern insurance took place in the early 19th century, when trade with Europe intensified. Islamic lawmakers had previously kept their distance from insurance, since it was bound by uncertainty.

In 1911, a fatwa from the office of Shaykh al-Islam in Istanbul asked for the acceptability of life insurance, with the authorities responding that it would be acceptable (jaiz), if it was conducted through a company outside the Islamic countries. Throughout Islamic history, there were institutions like support funds that fulfilled the functions of insurance. These were established by janissaries, eunuchs, tradesmen or locals, during the Ottoman period. These support funds accepted donations and were governed by a reliable trustee, chosen from the benefactors or else determined by the government. This person invested the collected money in a profitable business, and from the remaining sum, he provided interest-free loans to members, when necessary. Thus, a real cooperation was provided and it was made possible to reduce the impact of the damage or loss by spreading them equally within the community, rather than enrichment of a single person (which was often the insurer).

In addition, the state treasury saved the “zakats” (religious taxes), collected from the rich in a fund. Then, they paid salaries to those who could not work, provided housing, and met their health and education costs.

In Rome, small merchants used to set up similar support funds while Arab countries had “diyat,” or pecuniary damages that anyone committing an unintentional offense, paid as punishment and was shared between close relatives and colleagues.

The first premium insurance or insurance as we know it was introduced in Italian cities like Venice, Pisa and Florence in the 1250s. These were mostly marine insurance. Insurance for landed property emerged in 1666 after the Great fire of London.

The first life insurance policy was issued in London in 1574 while commercial insurance developed in the 19th century. Meanwhile, accident insurance was also added to fire and life insurances. New types of insurance emerged in the 20th century to cover incidents like burglary, animal death, machinery breakdown and war. Social insurance was born with the strengthening of the working class. The first insurance companies in Turkey started operating in 1872, when three British companies, The Sun, The Northern and The North British Insurance Companies, opened branches in Istanbul. Many other insurance companies followed suit, but struggled to operate due the lack of well-established insurance laws, which did not come into being before 1906.