Breaking bad: Hollywood wakes up to the power of dark, dangerous women

Forget sobbing suffering beauties. From Rebecca Hall’s unlikable newsreader to Jessica Chastain’s ruthless lobbyist, this is the year of the unsympathetic, deeply flawed femme. Thank goodness for that.

The good news is that there are some great female characters coming up in the cinema in 2017. The bad news, if you’re looking for inspirational feminist role models, is that you won’t always find them in the movies. Lurking behind such obvious audience-pleasing instances of fine upstanding womanhood as Taraji P Henson plotting a course through the cosmos in Hidden Figures, or Rachel Weisz taking antisemitism to court in Denial, lies a monstrous army of deeply flawed femmes – perverse, prickly, deluded, depressed, obsessive, venal, scary. 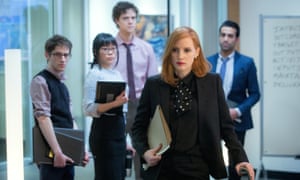 The good news is that there are some great female characters coming up in the cinema in 2017. The bad news, if you’re looking for inspirational feminist role models, is that you won’t always find them in the movies. Lurking behind such obvious audience-pleasing instances of fine upstanding womanhood as Taraji P Henson plotting a course through the cosmos in Hidden Figures, or Rachel Weisz taking antisemitism to court in Denial, lies a monstrous army of deeply flawed femmes – perverse, prickly, deluded, depressed, obsessive, venal, scary. Well, I say hurrah for that.

First up, though, is the unfeasibly perfect Natalie Portman in Pablo Larraín’s Jackie, not so much a biopic of Jacqueline Kennedy as a tone poem evoking its subject’s transformation from trophy wife via weeping widow into American icon, a makeover forged by grief. In recreating a historical event made to seem ever more removed from reality by more than half a century of Zapruder, Warhol and conspiracy theorising, the film-maker and his leading lady transport us back to basics: the barely imaginable horror of witnessing your husband’s brains being blown out. Portman knocks it out of the park, giving a masterclass in suffering beautifully.

And I mean beautifully. Whereas the likes of Claire Danes and Laura Dern convey excoriating emotional pain by snivelling like you and me, cry-faces scrunched up and shoulders heaving, Portman weeps like a lady, trying to blink back her tears, elegant eyebrows rearing up like rival caterpillars to greet each other across her lightly furrowed brow. “She cries cute,” a fan comments beneath one of the supercuts of Portman’s comely blubbing in everything from Léon to V for Vendetta to the Star Wars prequels to Black Swan. And Larraín’s camera loves her, whether she’s crying in the shower or chaperoning her husband’s coffin on Air Force One. 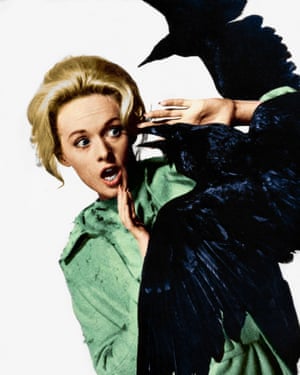 There is something exquisitely cinematic in the suffering of women, and depicting their torment in big closeup has long been a favourite pursuit of male auteurs. How often do their cameras linger on women’s pleasure? Try to think of great actressy moments in the cinema and the memory veers towards heartbreak more than happiness or fulfilment. Greta Garbo may have laughed in Ninotchka, but this was already so atypical that the publicity department bragged about it on the poster.

No wonder there have been so many films about Joan of Arc – all that in-your-face spiritual agony, with the religious element providing a righteous front for the voyeuristic revelling in pain. In The Passion of Joan of Arc, Carl Dreyer dwells on Falconetti’s sublime anguish so relentlessly his camera is practically lapping up her tears. One thinks of the “women’s pictures” of Douglas Sirk or Max Ophüls, or Rainer Werner Fassbinder (Margit Carstensen in The Bitter Tears of Petra von Kant), or Meryl Streep tortured by Sophie’s Choice, or, more recently, Nicole Kidman in Birth, or Marion Cotillard howling the roof down in La Vie en Rose or Rust and Bone.

Alfred Hitchcock pretty much dedicated his career to putting his leading ladies through the wringer, and duly subjected Joan Fontaine, Ingrid Bergman and Kim Novak to the sort of carefully calibrated mistreatment guaranteed to make them look more alluring than ever. This tendency reached its apex in The Birds, where Tippi Hedren starts off as the epitome of cool blonde chic (impeccable coiffure, spotless suit and pearls) and ends up decoiffed, streaked with blood, her nylons laddered – a traumatised victim of assault. Hitchcock is clearly getting off on it. Male directors, few of them attractive physical specimens themselves, like nothing better than to knock perfect leading actresses off their pedestals.

The most Hitchcockian heroine of 2016 was Amy Adams in Tom Ford’s Nocturnal Animals. Adams plays Susan, a super-soignée Los Angeles art gallery owner who lives in a concrete and glass Bel Air mansion and sports impeccable maquillage, preternaturally straight hair, high-tone couture (as you’d expect in a film from the former creative director of Gucci), statement jewellery so pronounced you half expect it to start talking and a fabulously good-looking husband who keeps her in the style to which she is accustomed. 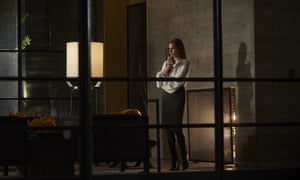 But, this being a revenge thriller (albeit not necessarily the sort that you’re expecting) the delivery of the manuscript of a novel by her first husband throws a spanner into the perfection. Unlike Hitchcock, Ford is a prime physical specimen, and one can safely assume his interest in her downfall isn’t so much sexual as conjuring classic Hollywood by expressing emotion via screen style. But many filmgoers have felt alienated by Susan not being sympathetic, and condemnations of the film as misogynistic are not hard to find. “A love letter to sexist movies” (Bitch Flicks); “epitomises salacious, exploitative misogyny” (Ruthfully Yours); “an ugly, mean-spirited story from start to finish, with a deep misogyny at its core” (Bouquets & Brickbats).

I suppose if you like your films to be purveyors of Old Testament-style justice, in which anything unpleasant that may happen to, say, a career woman must be de facto punishment for sins she has committed, then Ford’s treatment of her is as cruel as that of her ex-husband. But Nocturnal Animals is a cautionary tale, not a moral one. I prefer to think of Susan as a tragically flawed human being, wrestling with life’s complexities and suffering the consequences of her own misguided decisions, yet in control of her own destiny, just like all the best male movie characters. I’m not interested in watching the hackneyed rise and fall and rise again of a one-dimensional paragon who learns from her mistakes, triumphs over sexist opposition and emerges in the third act as a shining feminist role model. I want compelling drama and dark nights of the feminine soul. I want Shakespearean, and if that means a character suffering, so be it.

And it looks as if 2017 might be stepping up to bat. Brace yourself for a coven of female characters who are no more sympathetic than Susan. Prepare to see them make awful decisions and do bad things, with results that are sometimes tragic, sometimes comic, sometimes both simultaneously. In Christine, Rebecca Hall gives a fearlessly unlikable performance as an ambitious Florida newscaster whose refusal to play the game leads her into some very dark places. In Miss Sloane, Jessica Chastain is bracingly uningratiating as a ruthless Washington DC lobbyist. In Elle, Isabelle Huppert plays a chilly businesswoman who reacts to being raped by refusing to embrace the traditional movie roles of victim, survivor or avenger, instead striking out into unexpected and distinctly uncomfortable territory.

All these are hints that the next few months could be one of the most promising seasons for choice female roles in years, and what is especially exciting is that female film-makers’ visions are at last entering the picture. In the three chapters of Certain Women, Kelly Reichardt presents the non-glamorous lives of Laura Dern, Michelle Williams and Lily Gladstone in a precisely observed manner that is the opposite of melodramatic, though one of the segments will still break your heart. Maren Ade’s Toni Erdmann may be named after the grotesque alter ego of its leading male character, but it’s chiefly about the strained relationship with his daughter (Sandra Hüller), a workaholic businesswoman leading a bleak life in Bucharest. Like Reichardt, Ade isn’t in a hurry and prefers slice of life to glamour, but the film packs at least two audience-pleasing highlights to rank with any by commercial Hollywood.

But you don’t have to settle for realism, because the more we see movies by female film-makers, the more it’s evident that the female point of view, like the male one, is not some homogeneous, touchy feely Mama Mia!-type hoedown. Alice Lowe stars in her own directing debut, the deliciously mean-spirited Prevenge, as a pregnant woman whose foetus urges her to kill, and kill again. Lowe’s Arnold Bennett-ish ear for one-liners, insight into hormonal chaos, and gleeful splatter combine to present a female POV you’ve never seen before. From the other side of the Atlantic, Anna Biller pays visual homage to the colourful style of 1970s occult thrillers in The Love Witch, the tale of a Californian femme fatale (Samantha Robinson) whose love spells have bloody consequences, but gives the story a modern feminist twist. 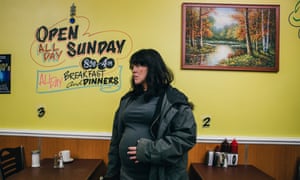 Alice Lowe as a woman whose foetus urges her to kill in horror flick Prevenge. Photograph: Western Edge Pictures

And keep your eyes peeled for Julia Ducournau’s Raw, the best and bloodiest slice of body horror since David Cronenberg in his prime. It’s about a naive French veterinary student (Garance Marillier) whose hair-raising rite of passage includes brutal hazing, eating raw liver, cannibalism and the funniest, most gruesome bikini waxing ever filmed.

There’s more than enough room for all these films. Some you may love, others you might loathe, but there is no longer any excuse to pin feminist hopes and dreams on to a single film or female character. We contain multitudes.