Alex Morgan: ‘If Fifa start respecting the women’s game more, others will follow’

The American star striker is an active campaigner for women’s equality off the field and has set her sights on becoming the world’s leading player on it, having taken the plunge with a six-month loan spell at Lyon

Alex Morgan is a World Cup winner, Olympic gold medallist and has scored 73 goals in 120 games for the USA. Photograph: Harry How/Getty Images

On a cold, grey January day in Lyon the fire of Alex Morgan’s ambition is obvious. She has already spoken of her desire to become the best female footballer in the world and, a long way from the winter sunshine of Florida, to adapt to a new culture in France. Morgan arrived in Lyon just a few days into 2017, after she had been pursued on Twitter by Jean-Michel Aulas, the president of Lyon. Aulas made it clear that signing the American star striker would underline Lyon’s commitment to a women’s team which won the French title, domestic cup and Champions League treble last season. 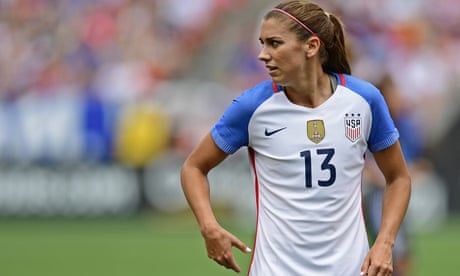 Morgan’s drive might be matched by Lyon but the 27-year-old World Cup winner and Olympic gold medallist, who has scored 73 goals in 120 games for the USA, stresses how many more important battles are still to be won for women’s football. “It’s great to see women standing up in their own line of work and fighting for fair value,” she says after name-checking Jennifer Lawrence and Taylor Swift. Such starry allies suit Morgan, who has more than 2.8 million followers on Twitter, but there is also a wearying grittiness to the struggle for equality in women’s sport.

“We’re trying to do the same thing and we’ve come a long way. But it gets exhausting having to do this every day, every week. Our male counterparts have not had to fight as much – so sometimes you feel a little exhausted always having to prove yourself and show your worth.”

Morgan rolls her eyes when I say how odd it is that sportswomen are having to fight so hard for parity in 2017. “Sometimes it feels a little redundant and I wish we didn’t have to fight so hard. But you see female actresses and singers standing up for themselves as well as women in general. A woman earns an average 73 cents to the male dollar in the US. So there’s still a long way to go. There’s hope in the fact that so many people know about our struggle in football – with the CBA [Collective Bargaining Agreement] and our fight for equal pay. The fact that the agreement was such a big deal last year showed how much the women’s game has grown.” 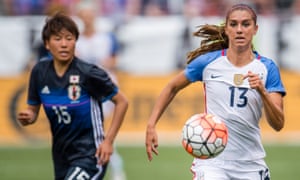 In her new European setting Morgan is note-perfect in always saying “football” rather than “soccer”. But semantics do not really matter when the issues within the women’s game in the US are so tangled that Morgan speaks of “a crisis”. She stresses that the dispute between US Soccer and the national team, with the players calling for a fairer structure in relation to the men’s squad, could lead to strike action.

“It’s necessary for change sometimes,” Morgan says of a possible strike. “It wouldn’t be the first time women decided to strike. Colombia and a couple of other countries might do the same. And Australia didn’t play us a year ago because of the same battle. We were supposed to play them in a few weeks and they decided not to get on the flight because they weren’t getting paid what they were worth – or anywhere close.

“To force a change sometimes you need to stand up. You know what you’re worth – rather than what your employer is paying you. We’re not scared. To move the women’s game ahead we need to do what’s necessary. I feel other national teams are looking at us for that guidance.”

Morgan laughs wryly and says “Where do I start?” when asked for a potted history of the US dispute. But she then speaks clearly. “As a national team we have a collective bargaining agreement and from 2001 we’ve had a salary-structured contract because there hasn’t always been a league for national players. So US Soccer has funded the players by giving them an annual salary. Moving forward we would love to keep that consistency in being paid [by the federation] but we want to close the gap between men and women. 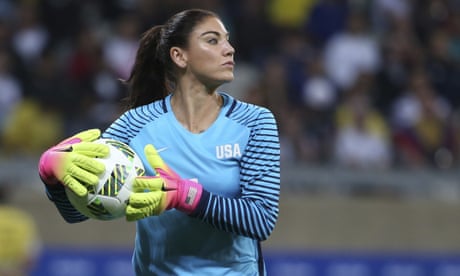 “But the fight is about receiving equitable treatment – not just pay. Our CBA ended last month so right now we’re locked with the status quo. Neither US Soccer nor us have submitted anything that says they’ll lock us out or that we will strike. We’re hoping to reach agreement – but there eventually needs to be pressure from one side to meet in the middle.

“We don’t have a World Cup or Olympics to use as leverage while we negotiate a new contract. But we have an important tournament coming up [in March]. The SheBelieves Cup brings France, England and Germany to the US. Before we play those matches we want to get a deal done so we can move on.”

The fact that women’s soccer still struggles for parity in the US – where it is such a popular sport – indicates the depth of the battle facing the female game globally. Morgan is forthright when she considers Fifa’s attitude to women’s football and its decision to stage the 2015 World Cup on artificial pitches. “We took it very personally because it was an insult. They had never done that for the men – and they never would. The men wouldn’t stand for it. We tried to take a stand and we brought in lawyers and tried to bring it to court in Canada. Lots of players were involved internationally. But it was too late to change anything.

“I understand there’s much more money in the men’s game. But Fifa spent so much time on the men they now need to focus a little more on us. I would like to close that gap even if I’m not expecting it to be equal. I’m not expecting there to be a huge jump and the win bonus to be $35m when, for the women, it’s $2m. I don’t think the entire world respects women in sport. But if Fifa start respecting the women’s game more, others will follow.” 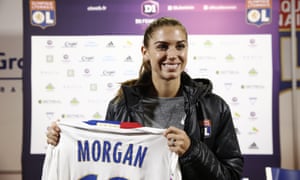 Alex Morgan holds us her new shirt during a press conference as part of her official unveiling at Lyon. Photograph: AP

Morgan’s decision to immerse herself in European football, at least for an initial six-month loan from Orlando Pride to Lyon, is motivated by a desire to “improve my game” as she seeks to become the world’s best female footballer. “I still have a way to go. I hope to get there this year or next year. I’ve been able to step up in big moments in the 2012 Olympics and the World Cup. But before I’m able to be the best player in the world, I need to be in the world’s best XI. The start of that is training with the world’s best [club] team.

“I would like to win the Ballon d’Or for women. But every top professional should have that ambition. We’ve just seen the 2016 award [won last week by Morgan’s US team-mate Carli Lloyd]. Carli was up against Melanie Behringer [of Germany] and Marta [the Brazilian who previously won the award five years in a row]. They’re three of the world’s best players – but others can compete with them.”

Morgan has star appeal and this past weekend L’Équipe ran a six-page magazine cover story on her. “That’s heartening, isn’t it,” Morgan says, “because you expose not only yourself but the sport as a whole.” 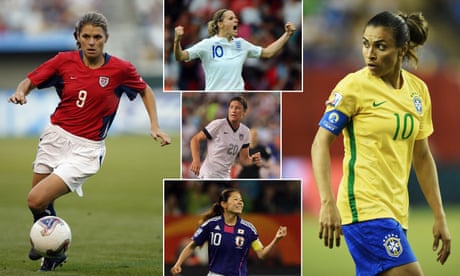 The 20 greatest female football players of all time

It’s still difficult for Morgan as she tries to learn French – and after just a few days she admits she has not moved far beyond “bonjour”. She is also missing her husband, Servando Carrasco, a defensive midfielder for Orlando City, and their dog Blue. “My husband found it hard as well because we are finally in the same city [Orlando] after six years of playing professionally in different cities. But I told him I need to challenge myself and evolve as a player. He ended up not only supporting me but feeling like it was necessary for me.”

At least her established role as one of the world’s best players means that Morgan, as an American, will not suffer the prejudice that afflicted her countryman Bob Bradley during his brief managerial spell in the Premier League with Swansea. “I was cringing and felt really bad for him,” Morgan says of Bradley. “I didn’t feel like he had enough time. He couldn’t bring in any of his own [coaching] guys and it was a little cruel and unfair.”

More than 26 million people in the US watched Morgan and her team-mates win the 2015 World Cup final – a much larger television audience than for the men’s team. But Morgan points out that most women playing the game professionally, but not at national level, have to work in additional jobs. “They have to do that for five months a year because our season is only seven months long. They definitely need to find jobs, whether that’s soccer clinics or camps or an actual desk job. The minimum salary when we started the League four years ago was around $6,000. It’s improved a little and players receive housing so that helps. But even now the minimum salary is barely liveable. That’s why you’re seeing players retiring at 25 – before their prime.”

How would Morgan improve pay for women’s soccer in the US? “Accessibility is important. Having games on TV and that sort of marketing is crucial. Sometimes I’ll be walking through Orlando and people recognise me and they ask if I’m here for the national team. They don’t understand they have a women’s club team in their own city. I get that it’s only been a year but awareness hasn’t been great.

“The NWSL is our baby because we’ve seen two leagues in the US fold. Players, coaches, owners and fans want it to succeed. And just because I’m playing in Europe the next six months doesn’t mean I will stop caring about football back home. I’m going to be very active in our fight for the new agreement.”

Morgan’s allegiance to the US means she smiles when reminding me that the 2019 women’s World Cup final will be held in the very same Lyon stadium where we now sit. Her aim is to win that tournament in her adopted French home. But, in terms of winning the wider battle for women’s football, can equality be achieved soon?

“That’s the hope. Ten years? I don’t know. Twenty years I see as definitely doable. Fifa has to do a lot more to evolve our game because women in sport aren’t respected equally around the world. Our current battle in the US will get resolved but I don’t believe the fight will ever end globally for the women’s game. We will always have to fight for our rights.”