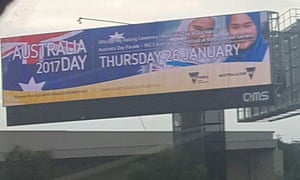 A digital sign advertising Australia Day 2017 featured images of people from various cultural backgrounds, including one picture of two Muslim girls in front of the Australian flag.

An Australia Day billboard featuring two girls in hijabs has been removed from a site in Melbourne after threats were made to the company behind it.

The digital sign featured rolling images of people from various cultural backgrounds, and one picture of two Muslim girls in front of the Australian flag sparked furious debate among social media users.

Hundreds of people criticised the image for being “too politically correct” or not a true reflection of Australia Day.

Victoria’s multicultural affairs minister, Robin Scott, said QMS chose to take it down due to a number of threats.

I created the burkini to give women freedom, not to take it away

“Anyone who considers this a victory needs a refresher on the true meaning of Australia Day,” Scott said. “It is about bringing people together and celebrating the diversity which makes this state and this country great.

“It’s very disappointing to see a small minority attacking proud Australians for their love of their country.”

Angry comments about the sign, erected alongside a freeway interchange between Peninsula Link and Connect East at Cranbourne, began on Friday when it was shared on Facebook by a number of far-right groups including the United Patriots Front.

By Monday thousands of people had shared the image of the girls in hijabs.

“This isn’t a reflection of Australia Day, are we losing our own culture to be politically correct??,” Sydney woman Liz Parker wrote on Facebook.

But not everyone was critical.

Gina Rose posted: “We are a multicultural nation, if you have a problem with that, maybe you should leave.”

The RACV said the billboard was part of a broader Victorian government campaign to promote Australia Day.

“RACV is proud to be the major supporter of the Victorian government’s popular Australia Day festival, which celebrates everything that makes our country great,” it said in a statement.

The photograph used for the billboard was taken in Melbourne on 26 January 2016, and displayed on the Victorian government’s Australia Day gallery. It shows that the two young girls were holding Australian flags as they attended events at Docklands.