Boris Johnson accused Saudi Arabia of abusing Islam and acting as a puppeteer in proxy wars throughout the Middle East, in remarks that flout a longstanding Foreign Office convention not to criticise the UK’s allies in public.

The foreign secretary told a conference in Rome last week that the behaviour of Saudi Arabia, and also Iran, was a tragedy, adding that there was an absence of visionary leadership in the region that was willing to reach out across the Sunni-Shia divide.

At the event, Johnson said: “There are politicians who are twisting and abusing religion and different strains of the same religion in order to further their own political objectives. That’s one of the biggest political problems in the whole region. And the tragedy for me – and that’s why you have these proxy wars being fought the whole time in that area – is that there is not strong enough leadership in the countries themselves.”

The foreign secretary then identified Saudi Arabia and Iran specifically, saying: “That’s why you’ve got the Saudis, Iran, everybody, moving in, and puppeteering and playing proxy wars.”

Johnson’s criticism of Saudi Arabia came as Theresa May returned from a prestigious two-day visit to the Gulf in which she lauded both the Saudi royal family for its visionary leadership, and the value of the 100-year-old alliance with the UK.

Foreign Office ministers, aware of Saudi sensitivity to criticism and the strategic importance of the Gulf relationship, usually soft-pedal and focus on their path to reform. 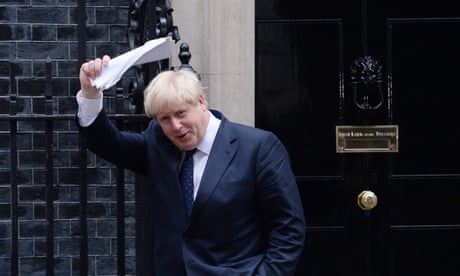 However, since becoming foreign secretary, Johnson has repeatedly landed himself in trouble. He has been accused of committing a string of gaffes and some people argue his tendency to speak frankly loses the UK allies.

Members of the Saudi royal family, along with Qatar and Turkey, have frequently been accused of regarding the civil war in Syria as a contest between a largely Sunni-led opposition and an Iranian Shia-led militia. But government ministers working alongside the Gulf states in Syria do not describe the Syrian opposition as “puppets”.

The British defence industry is also heavily dependent on arms contracts with the Gulf states, and the Royal Navy has established a major naval base in Manama, the capital of Bahrain.

Johnson is due to visit the region this weekend, when he will have to explain why he thinks the Gulf states are abusing Islam for political ends.

Speaking at the Med 2 conference in Rome last week, Johnson rounded on the quality of political leadership in the Middle East, saying: “There are not enough big characters, big people, men or women, who are willing to reach out beyond their Sunni or Shia or whatever group to the other side and bring people together and to develop a national story again. That is what’s lacking. And that’s the tragedy.”

The Foreign Office said on Wednesday that Johnson had expressed his strong support for Saudi Arabia on the BBC’s Andrew Marr Show at the weekend, and said his criticism of the lack of leaders willing to reach out across religious divides was a reference to the lack of such leaders inside conflict zones – such as Yemen and Syria.

A spokesman for the Foreign Secretary said: “As the foreign secretary made very clear on Sunday, we are allies with Saudi Arabia and support them in their efforts to secure their borders and protect their people. Any suggestion to the contrary is wrong and misinterpreting the facts.”

At the conference, Johnson unfavourably compared the quality of Middle Eastern leadership with the current efforts being made by Turkish and Greek Cypriots to end the stalemate over the status of the island.

“I’ve just come from Cyprus where I have seen one example of how this can happen,” he said. “It’s not there yet. It is still very difficult. But you have two leaders, from the Greek community and the Turkish community, who are trying and they are taking risks, each is taking risks with its own community, to try to bring that island together. I see that in Cyprus and I have to tell you I don’t see it anywhere else in the region.”

He added: “It’s a tragedy to watch it. We need to have some way of encouraging visionary leadership in that area. People who can tell a story that brings people together from different factions and different religious groups into one nation. That’s what is missing.”

Ministers have defended the Saudi role in combatting an Iranian-backed Houthi rebellion in Yemen. The war has led to widespread famine, thousands of deaths and brutality on all sides.

Foreign Office lawyers have insisted there is no evidence that the Saudi air campaign against the Houthis means there is “a serious risk” international humanitarian law will be breached, and as a result no UK government licences to sell arms to Saudi should be withdrawn.

Johnson’s remarks in Rome came in response to a claim made by the secretary general of the Arab League, Ahmed Aboul Gheit, that Sunni-Shia division was wrongly being used “to serve national policies and objectives”. Aboul Gheit said: “Religion was being used as an instrument of politics. That should not be.”

At the same conference, Johnson brandished a document marked sensitive which showed the civil service had briefed him that he was to express an interest in replicating the Helsinki east-west peace process for the Middle East, but not to make any commitment to the proposal. It also told him the chief value of the conference lay in meeting other senior politicians.

Downing Street was furious last month when a snatch photograph revealed detailed notes made by a Conservative party aide about a meeting attended by the Brexit minister, David Davis, appearing to reveal details of the government’s EU exit strategy.

By comparison, Johnson’s briefing notes are relatively bland, but it shows ministers are still struggling with the requirement to retain confidentiality.