More than half of Unite’s female officers bullied or harassed, study finds 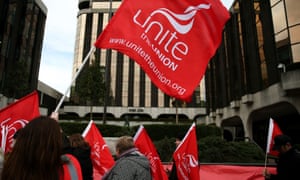 Unite’s senior officials have been considering the findings of the report for four months. Photograph: Brian Lawless/PA

More than half the female officers in Britain’s biggest union claim to have been bullied or sexually harassed by fellow officials or members in their workplaces, a leaked internal study has found.

The report about the treatment and working conditions of female representatives at Unite also concluded that a quarter of employed officers believe allegations of bullying were not handled well by the union when they were reported.

Titled Women Officers in Unite, the report cited an official who said she felt increasingly isolated at work because of male officials talking among themselves. “I have to sit among colleagues who refer to our secretaries as the girls … [They] think it is correct to refer to black people as coloured, talk about chairmen, refer to women as a piece of skirt,” one female officer said.

The stories you need to read, in one handy email

One woman told interviewers she was “sexually assaulted by a senior officer in the past”. The report did not go into any further details of her case and did not explain whether the woman reported the assault to police or the union. However it is understood that incident took place in 2007 before Unite was formed through the amalgamation of three unions.

Some of the worst examples of intimidation came from members in external workplaces. One woman reported she had been told in a meeting that she needed “a good ****”.

Another respondent blamed the union’s senior management for failing to commit to inclusivity. The report quoted her as saying: “The old-boys network is alive and kicking unfortunately in Unite, where it is who you know and where they come from that matters.”

The findings are contained in the 39-page internal report about the working lives of the union’s 74 female officers, who support the union’s members and elected shop stewards on shop floors and in offices. It was commissioned by Unite’s officers national committee (ONC) in February and presented to senior management in May.

Howard Beckett, Unite’s executive director for legal services, said the union had not received any complaint of assault and would have reported any such incident to the police. He pointed out that members are not union employees. “If an officer has a complaint about a member, we are restricted to consideration of the suitability of the member to be in the union.

“The union, of course, encouraged the ONC to consult female officers about their experience in the workplaces where our members work. Len McCluskey [Unite’s general secretary] has actively promoted gender balance in the officer core and women now occupy the most senior positions within the union … as such any allegation of an ‘old-boy network’ is simply untrue,” he said.

The report concluded, however, that a majority of female officers agree that Unite colleagues and reps are supportive and interested in what they do – although nearly 40% believe that talking about working concerns with the union and colleagues is seen as a weakness.

The leaked report emerges almost a week after Unite failed to overturn a ruling that it was responsible for the sexual harassment and bullying of a female former official.

Sally Nailard, who was forced to leave her job as Unite’s regional officer at Heathrow, claimed she had been subjected to a two-year campaign including lewd and aggressive comments from shop stewards who wanted her to leave her job.

When she appealed to the union’s senior figures for help, she claimed they helped force her out.

An employment appeals tribunal on Tuesday upheld a previous judgement that Unite was responsible for sexual harassment she suffered at the hands of shop stewards and that her dismissal was an act of sexual discrimination.

Sources close to the case believe it could set a legal precedent of making unions responsible for sexism by shop stewards in the workplace in certain circumstances and open the way for other women to seek redress.

Nailard, 51, who has not worked since leaving Unite two years ago, said: “I am very pleased that the responsibility of the trade union Unite for the actions of its shop stewards has finally been established. I sincerely hope that the [tribunal’s] decision will benefit all of my female former colleague officers who work for Unite as well as for female colleague officers who work in other trade unions.”

Beckett said the lay representatives were employed by Heathrow Airport Ltd and not by Unite. “We dispute that any representative is acting as the union’s agent in circumstances where they are abusive to an officer. Lay representatives’ sole role is to represent their fellow workers in their workplace and they have no authority to be a union ‘agent’.

“Unite will be appealing this element of the judgment,” he said.

Nailard had been a union officer for a year when, she claimed, a number of union members began to orchestrate a campaign of bullying and harassment against her. She alleged that, during one branch meeting in early 2013, she was “verbally attacked, abused and threatened” by a union member to such an extent that “she felt physically unsafe”.

On 1 July last year, an employment tribunal had ruled that Unite was liable for the bullying and sexual harassment of Nailard by two male elected officials of the union. She resigned and the tribunal said this amounted to unfair constructive dismissal.

There was no finding that any employee of Unite had acted in a discriminatory manner.