The Florida mosque where Omar Mateen, who committed the deadliest mass shooting in U.S. history, prayed was badly damaged on Monday in an arson attack, investigators said.

Mateen was killed by law enforcement officials after fatally shooting 49 people and wounding 53 others in a gay nightclub in Orlando in June.

Law enforcement officers received reports of flames rising from the Islamic Center of Fort Pierce, located about 100 miles (160 km) southeast of Orlando, at about 12:30 a.m. EDT, St. Lucie County Sheriff’s Major David Thompson told reporters at a news conference. No one was hurt.

The attack occurred on one of the holiest Muslim holidays. 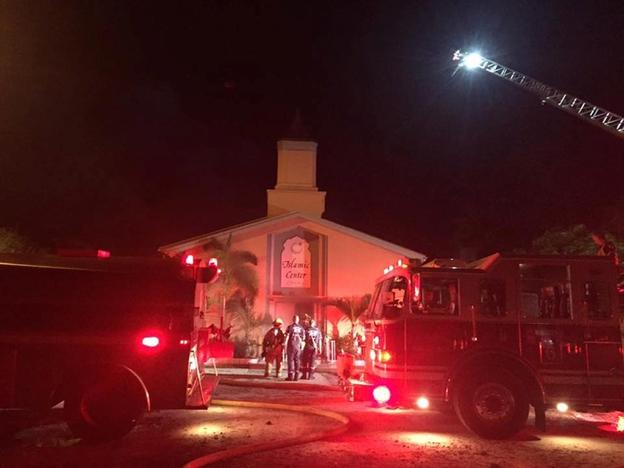 Surveillance video showed a white or Hispanic man ride up to the mosque on a Harley Davidson-style motorcycle, Thompson said. The suspect got off the bike and approached the mosque carrying a bottle of liquid and papers moments before the blaze erupted, he said.

Investigators have not identified the man, who shook his hand while leaving the area of the flames, indicating that he might have burned himself, Thompson said.

Mateen told police in a 911 call that he had pledged his allegiance to the head of the Islamic State militant group, though investigators do not believe he had any help from outside organizations.

Shortly after the massacre, the mosque in Fort Pierce was identified as Mateen’s place of worship. It has reported receiving multiple threats of violence and intimidation. In June a motorcycle gang circled the center and shouted at its members and in July a Muslim man was beaten outside the mosque.

Thompson said investigators were still seeking a motive and were considering a connection with the 15th anniversary of the Sept. 11 attacks on Sunday.

“I would not want to speculate, but certainly that is in the back of our minds,” he said. Thompson said deputies will explore whether the arson was a hate crime.

The Muslim holiday Eid al-Adha, a major Muslim holiday, was being celebrated on Monday and also could have prompted the attack, Thompson said.

The mosque temporarily relocated its morning prayers for Eid al-Adha, also known as the Feast of Sacrifice. The building sustained “substantial damage” and whether it would be usable again was unclear, Thompson said.