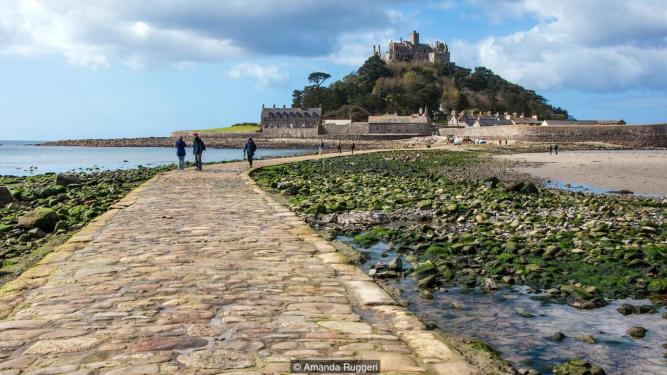 St Michael’s Mount, located half a mile south off the Cornish coast, can be accessed on foot – but only at low tide.

Fraternal forts
Many travellers have heard of Mont St-Michel, the fortified medieval monastery perched on an island in Normandy, France, that you can walk to when the tide is out. More surprising is that England has its own version: St Michael’s Mount, located half a mile south off the Cornish coast. At low tide, you can walk from the mainland village of Marazion to the island and its medieval castle.

Both sites got their names from St Michael, one of the most important saints in the Middle Ages. Just as he was said to appear in 708 to give his name to Mont St-Michel, legend holds that the angel appeared in 495 at St Michael’s Mount to save fishermen from crashing into the rocks. Cementing the relationship between the two further, by the time of the Norman Conquest in the 11th Century, the Benedictines of Mont St-Michel also controlled the Cornish island. In fact it was they who built its church and monastery in 1135, though by 1414 St Michael’s Mount was back under British control. (Credit: Amanda Ruggeri)

Island life
St Michael’s Mount isn’t just a visitors’ attraction, it’s a living community. There are 23 residents who live in the buildings at the base of the fortress, many whom work for the St Michael’s Mount estate, which is jointly run by the National Trust and St Aubyn Estates. The population includes eight children who cross the sea to the mainland for school each day.

Life on the island isn’t always easy. In fact, storms were so bad in 2014 that the causeway was damaged. It has since been repaired, however, and among other improvements, a visitor’s centre has been built; it is opening this week. (Credit: Amanda Ruggeri)

Royal residents
The island’s best-known residents are James and Mary St Aubyn, also known as Lord and Lady St Levan, who moved to the castle with their four children in 2003. (One perk that the children discovered, as James writes in his guide to the estate, is that the castle terrace is great for skateboarding.) The estate has been in their family for more than 350 years, ever since Parliamentarian Colonel John St Aubyn was made Captain of St Michael’s Mount during the English Civil War; after coming out on the winning side, he purchased the castle from its Royalist owners. In 1954, the family gave most of the island to the National Trust, receiving a 999-year lease in return. (Credit: Amanda Ruggeri)

Strategic stronghold
The English Civil War wasn’t the only time that St Michael’s Mount found itself at the forefront of military action. In 1193, the walled monastery was seized by the future King John and held against his brother and the current king, Richard I. In 1473, as the Houses of Lancaster and York fought for supremacy in the Wars of the Roses, the island was besieged by the army of Yorkist King Edward IV; Lancastrian commander John de Vere held the castle against the king for six months. And in 1588, the stronghold was the first to light a beacon after spotting the Spanish Armada – causing a chain of ensuing beacons that sent warning all the way to London.

But a more recent sign of the island’s military value are its three World War II pillboxes, the small, concrete guard posts designed to protect gun emplacements – and the soldiers operating them – in case of an attack. The fortress’s location made it useful for protecting the potentially vulnerable approaches to Mount’s Bay and to the bay’s beach, which runs from Marazion to the town of Penzance. Although two of the pillboxes are off-limits, you can visit the third on the isle’s southeastern flank. (Credit: Amanda Ruggeri)

Cornish tropics
Some visitors skip the castle gardens because they require a separate ticket. That’s a mistake. Running up the terraces tucked under the castle walls, the gardens harbour a number of colourful, exotic plants that you’d normally see in warmer climates – like fuchsia Cape daisies from South Africa, the azure-blue lithodora of the Mediterranean, agaves more frequently seen in Mexico and the strange-looking, rosette-shaped succulent aeonium of the subtropics. (Credit: Amanda Ruggeri)

Serious steeps
The survival of these warm-weather species speaks to Cornwall’s climate – the Gulf Stream keeps this part of southwest England particularly mild – and to the sun-soaking terrace rocks that allow the garden to heat up to 40C. But that doesn’t mean the gardens are easy to tend: the gardeners have to abseil in order to reach some of the steeper corners. (Credit: Amanda Ruggeri)