Towering over his Kurdish partner at a checkpoint in northern Iraq, U.S. volunteer John Cole cuts an unusual figure on the road to the newest front in the war against Islamic State.

Seven feet (2.1 meters) tall and holding his assault rifle upside down, Cole is among a relatively small band of Westerners who have made their own way to Iraq to take up arms against the militant group – even though Kurdish authorities say they need foreign money and weapons more than men.

Exactly how much fighting Cole has done is unclear, but the 23-year-old said that – unlike most regular U.S. soldiers stationed nearby – he has participated in offensives against Islamic State that involved artillery fire and airstrikes.

“You can feel the explosions in your teeth. It’s kind of cool actually,” he told Reuters, nervously pulling on a cigarette.

Cole, from Charlotte, North Carolina, said he had come for more than excitement after quitting his job transporting biohazardous materials such as medical waste. For all the violence, his fascination with northern Iraq – a mosaic of ethnic and religious groups – was a strong draw too.

“Some people take a year off before they go to college, other people just do this,” he said. “I’d like to spend time here and learn more about the culture, the people, the history of this land and then go home.”

Thousands of foreigners have flocked to Iraq and Syria in the past three years, mostly to join Islamic State. But smaller numbers – estimated now at several dozen – are with groups fighting the radicals.

Cole fell in with Kurdish fighters in neighboring Syria last July and a few months later went to Iraq, where he plans to stay until at least October.

He says he had been inspired to come after Islamic State overran the northern town of Sinjar, slaughtering, enslaving and raping thousands of people from the Yazidi minority.

Peshmerga forces of the autonomous Kurdish region, backed by U.S.-led coalition airstrikes, retook Sinjar in November while he was back in the United States for a break.

Last week, Cole was manning a roadblock near the town of Makhmour and just outside Camp Swift, a base for U.S. forces helping the Iraqi army and peshmerga in a slow-going offensive aimed at eventually recapturing the northern city of Mosul.

Unlike many of the volunteers, Cole is no seasoned ex-serviceman. He said he had received training on field artillery at a base in Oklahoma but quit due to a hip injury and flagging motivation.

The U.S. troops that remain in Iraq are largely on a mission to train and support Iraqi government and peshmerga forces, with those at Camp Swift restricted to their base several kilometers (miles) from the front line.

While the volunteers are less restricted, their roles can appear routine. Cole insisted he had no regrets about coming to Iraq, where his chores involve checkpoint duty, helping internally-displaced people, and “prisoners” – a task he declined to detail.

“I’m not angry about stuff like a lot of Westerners … (They) think they’re going to fight every day and kill tons of people, and then they come here and it’s not what they expected and they leave,” he said, adding that he had has picked up some Kurdish and Arabic phrases.

Many of the volunteers are veterans of Western militaries, including Ryan O’Leary, a divorced 29-year-old from Iowa who came to Kurdistan a year ago after tours with the army in Iraq and Afghanistan.

He and two other former U.S. servicemen, both around 50 years old, are working with the peshmerga north of Mosul. They say they’ve apprehended a dozen Islamic State fighters in recent months, but daily work more often involves training the Kurds on first aid and weapons handling.

“Right now it’s just mainly being bored on the frontline and getting artillery and mortar all the time,” O’Leary told Reuters.

Some Westerners, inspired by religion, have also joined Christian militias such as Dwekh Nawsha, which operates alongside the peshmerga to protect Assyrian villages on the frontline in Nineveh province.

Cole said he was surprised how Islamic State fighters – whose corpses he had photographed and posted to Instagram – had come from so many different countries.

“It’s fascinating, like a mini world war because you have all these people from everywhere coming to one centralized place to fight,” he said.

Kurdish officials have long pleaded with the West to provide the peshmerga with more direct support, and last week Washington pledged $415 million in aid.

The Kurdish authorities in Erbil have also increasingly pressed foreign governments to discourage their citizens from traveling to Iraq to join their ranks because they can become a liability.

Jabbar Yawar, secretary general of the peshmerga, said his ministry was not responsible for Western volunteers. “There is no formal body in the ministry of peshmerga that allows them or gives them permission,” he told Reuters.

O’Leary acknowledged that the ministry was pushing out many Westerners, whose number he estimated was now less than 40 and included criminals and troublemakers.

“One got kicked out of a unit two days ago. They booked him a one-way ticket back home,” he said. “He didn’t understand the culture.”

O’Leary plans to stay on past the campaign for Mosul, expecting the peshmerga to face a new confrontation with Shi’ite militias over disputed boundaries of the Kurdish region.

“I don’t really have a timeframe,” he said during a recent overnight watch duty less than a kilometer from Islamic State positions. 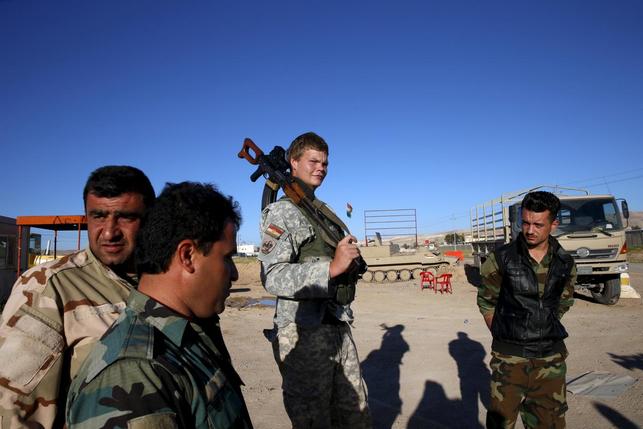