Toronto: The acquittal of former radio star Jian Ghomeshi has prompted fresh calls for a sweeping overhaul of the way Canada deals with allegations of sexual violence. 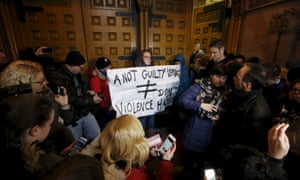 Protesters stand outside of the courthouse after an Ontario judge found former Canadian radio host Jian Ghomeshi not guilty on four sexual assault charges and one count of choking. Photograph: Mark Blinch/Reuters

In a ruling on Thursday, Judge William Horkins found Ghomeshi, 48, not guilty of four counts of sexual assault and one count of choking, arguing that prosecutors had failed to establish Ghomeshi’s guilt beyond a reasonable doubt.

But the verdict prompted widespread outrage among women’s rights activists who said the case underlined the country’s chronic underreporting of sexual assaults and low conviction rates.

Much of the anger has focused on the defence team’s strategy of undermining the testimony of the complainants by questioning their recall of traumatic events, and some campaigners have called for the creation of special sexual violence courts, with judges and prosecutors who have been trained in areas such as intimate abuse and trauma.

Speaking to the Guardian, the first complainant in the high-profile case called for sweeping reforms. “The whole system needs to be changed,” she said. “It can’t just be one person on the stand with a seasoned lawyer throwing darts at them.”

The woman – whose identity continues to be protected by a publication ban – said Thursday’s decision left her livid.

Some 15 months ago, she walked into a police station with allegations that Ghomeshi had – without warning – pulled her hair and punched her in the head. The act hurtled the mother of two into what she calls the toughest experience of her life.

The list of what she wished she had known from the outset is long, ranging from how her police statement would be used in court to the toll testifying would take on her nerves. “People tell you to just tell your story and that if you don’t remember, just say ‘I don’t know’. It’s not anything like that.”

As the trial came to an end, the woman launched a website that she hopes will become a resource to counter the gaping lack of information available for survivors navigating the court system. Just one day after its launch, the website had already received some 5,000 visits.

The site is her antidote to the many who worry that the high-profile trial – and Thursday’s verdict – willdiscourage others from coming forwardwith their own stories.

“I still think – as horrible as the system is – more people have to come forward. If everyone stays quiet, it is never going to change,” she said.

In Thursday’s decision, Judge Horkins stressed the need to prove the allegations beyond a reasonable doubt.

“Even if you believe the accused is probably guilty or likely guilty, that is not sufficient,” he said. “In those circumstances you must give the benefit of the doubt to the accused and acquit because the Crown has failed to satisfy you of the guilt of the accused beyond a reasonable doubt.”

But figures from Statistics Canada suggest that for every 1,000 sexual assaults that happen in the country, only 33 are ever reported and just three result in convictions, said David Butt, a criminal lawyer who often works with sexual assault complainants. “I call that a statistically validated 99.7% failure rate.”

In any other sector, a similar figure would elicit calls for an overhaul. “And yet we persistently cling to the myth that for sexual assault cases we’re somehow delivering justice,” said Butt.

In the coming weeks, Butt will argue the necessity for reform to the Canadian Bar Association, highlighting alternative options for sexual assault complainants such as civil lawsuits, where the burden of proof is lower than the criminal justice system, or restorative justice.

Hours after Thursday’s verdict, another woman described an encounter with the former radio star which she said left her feeling “dirty & sad”.

Actress Zoe Kazan said she met Ghomeshi in 2013 when she was interviewed by the Canadian Broadcasting Corporation radio host. “Before we went on air, he told me I was ‘just his type’. Funny, sexy, just the right amount of damage,” she wrote on Twitter on Thursday.